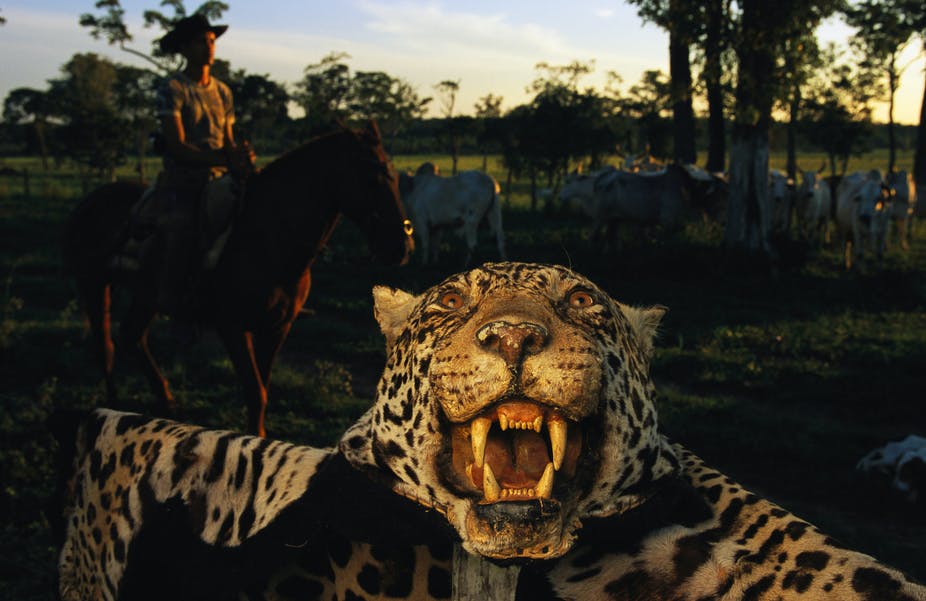 A jaguar skin lies sprawled across a fence post in one of the Brazilian Pantanal’s many cow ranches. This individual was shot by a rancher after a cow was found dead on the ranch.
Steve Winter

Human-wildlife conflict is a complex issue globally. Whether it’s mountain gorillas stealing bananas from farmers on the edge of Bwindi National Park in Uganda, or a pack of grey wolves raiding a cattle pen in western Montana, thousands of people navigate their lives alongside unwanted neighbours daily.

This forced coexistence creates friction as it often pits people’s livelihoods against the conservation of threatened species that are important to ecosystems and tourism.

For example, on the Kuku Group Ranch – a farming and wildlife ranch in Kenya – tourism brings in about US$400,000 in revenue annually.

But over a six-year period on the ranch, spotted hyenas and lions killed nearly 300 cows a year on average, leading to a conflict where local herdsmen killed at least 51 lions. This is important as lions are one of the main flagship species for tourism in Africa.

The livestock losses are significant, considering 36% of Kenyans live under the poverty line (US$1.90 a day). Even worse, these conflicts can sometimes lead to a loss of human life.

To try to quell human-wildlife conflicts, many conservation organisations and governments have turned to financial compensation. By paying the victims of conflict, they aim to remove the incentive to kill or harm an animal when it kills livestock or damages crops.

In our new study
we examined one of these compensation schemes in southwest Uganda. The Mihingo Conservation and Community Development Fund project was established in 2007 on the edge of Lake Mburo National Park to stop cattle and goat farmers from killing spotted hyenas and leopards.

These species are important tourism draw cards in the region. In 2018 alone, 1,585 people purchased a night game drive permit for leopard viewing in the park, which generated US$47,550 in tourism fees for the Uganda Wildlife Authority.

But large predators can cause significant financial damage to livestock farmers. Between 2003 and 2006, at least 19 leopards were killed on the boundary of the park because of stock raiding. Our data showed that spotted hyenas and leopards in this part of Uganda attacked at least 1,102 cattle, goats and sheep in a 10-year period.

But does compensation actually work to reduce conflict? The evidence is mixed.

In Kenya, for example, there is some evidence that compensation payments helped to reduce the killings of lions on the Kuku Group Ranch.

In contrast, a study in Wisconsin found that ranchers compensated for livestock losses attributed to wolves did not tolerate wolves more when compared to a sample of those who received no compensation.

Our own study in Uganda tracked compensation payments over time. It did not compare to a control group, so effectiveness was not directly measured.

But it did show that compensation payments for livestock attacks caused by leopards and hyenas quickly outstripped the funds available. The number of claims for cattle, goat and sheep losses more than tripled between 2014 and 2018 when compared to 2009-2013.

This was a challenge to sustainability of the scheme. In our study we also found that more than 60% of all livestock losses occurred while livestock were in protective pens, or bomas.

This suggests current protective bomas and livestock management practices are not very effective at reducing conflict in the region.

Read more:
Getting closer to a much better count of Africa’s lions


What are the alternatives?

Some community conservation groups in Africa encourage the strengthening of livestock holding pens to protect livestock from predators like hyenas and leopards.

The Living Walls boma programme in the Maasai Steppe of Tanzania, for example, was 99% effective in preventing attacks by hyenas and lions on livestock over 10 years.

Another example is the Payment for Presence scheme in Sweden, which paid reindeer herders to tolerate wolverine reproduction. Herders would continue to receive payments regardless of livestock losses.

This led to a wolverine population recovery. In the Amboseli ecosystem in southern Kenya, a system exists where lion guardians are trained to mitigate conflict with wildlife and to warn farming communities when lions come near their livestock.

Such initiatives, especially when integrated with other non-monetary schemes that address issues that communities prioritise, such as improved livestock management, are gaining increased attention.

There is an opportunity for future research to investigate schemes that address a wider range of livelihood and cultural needs for enabling humans and wildlife to co-exist sustainably.