Accra, Ghana//-MTN Ghana today announced that it is spending over $100 thousand by end of the year on the transformation of its Call Centre Technology.

The telecom company which has already spent 50% of the amount on the initiative says it would enable it to serve its numerous customers better.

The Chief Executive Officer (CEO) of MTN Ghana, Selorm Adadevoh who announced this year’s MTN Stakeholder and Media Forum, explains would enhance the consolidation of all customer contact channels.

Other call centre transformation initiatives which are being implemented by the company according to him are IVR menu optimization, and additional IVR self-service options.

He adds that the company continues to expand its 2G, 3G and 4G networks  across all the 16 regions of the, with each of them crossing the 90% coverage mark. 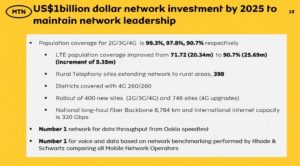 Furthermore, Mr Adadevoh indicates that MTN 4G are currently available in all the 260 districts of the country, whereas some 398 rural telephony sites are extending coverage to rural areas of the West African country.

“Our national long-haul fibre backbone is now 8,784 kilometers and international internet capacity is 320 gigabit per second”.

Mr Adadevoh notes that on the back of the infrastructure, MTN was rated number one network for data speeds by Ookla Speedtest, and number one for voice and data based on network benchmarking performed by Rhode & Schwartz comparing all telcos in Ghana.