THE Monetary Policy Committee (MPC) of the Bank of Ghana (BoG) has maintained the policy rate at 19%, citing fiscal pressures and the volatilities in exchange rates, inflation outlook, mixed commodity price movements, and weak global growth.

The policy rate is the rate at which commercial banks borrow from the central bank. It also has effect on interest rates. As the rate is maintained, it means that all the 27 commercial banks in the country are also expected to hold on to their base rates.

The Chairman of the MPC, Dr Henry Kofi Wampah, who is also the Governor of BoG, argued: “In assessing the inflation outlook, the committee observed that inflation is expected to peak in the near term. The latest forecast showed that inflation is likely to stay slightly above the upper band of the revised target of 13±2 percent by end 2014”.

However, inflation is expected to move within the band in the second half of 2015 barring any adverse shocks. Given these considerations, the Committee decided to keep the monetary policy rate unchanged at 19 percent, he told journalists at press conference on Wednesday (today) in Accra.

Dr Wampah stated that; ” fiscal pressures and the volatilities in exchange rates continued to pose challenges to the economy.

He added that the expected inflows from the Eurobond and the cocoa syndicated loan would provide liquidity on the foreign exchange market, stressing that; ” the government’s fiscal consolidation efforts are expected to be strengthened under the International Monetary Fund (IMF) programme which will also provide additional balance of payments support”.

The MPC observed softened business confidence and heightened inflation expectations. However, the Composite Index of Economic Activity (CIEA) showed strong growth on the back of real private sector credit growth with modest improvement in consumer confidence. The growth outlook is generally positive based on expected higher cocoa and oil output.

In addition, the gas production which is expected to come on stream from the latter part of the year will help address some of the challenges in the energy sector, the 7-member MPC stated.

On the global front, that the committee noted that global growth remained weak but was expected to rebound. Commodity price movements remained mixed. In particular, gold prices have marginally lost ground. However, cocoa prices have recovered which is a positive development for the external sector going forward, Dr Wampah noted.

The indications are that the pace of domestic economic activity continued to firm during the second quarter in spite of the ongoing economic challenges.

Bank of Ghana’s CIEA for the second quarter of 2014 suggests improved activity relative to the same period in 2013. The index registered a year on year real growth of 10.8 percent at the end of June, 2014, compared with a growth of 3.3 percent for the corresponding period in 2013.

Dr Wampah explained: “The main drivers of the improved economic activity for the period under consideration were domestic VAT and DMBs credit to the private sector.

The Bank’s surveys of consumer and business confidence reflected mixed sentiments. The consumer confidence index improved during the August survey, as the index moved to 77.5 from 76.1 in May 2014. The survey respondents were mildly positive about economic prospects.

The business confidence index on the other hand indicated continued softening in sentiments. The index dipped from 82.8 in March to 78.6 in June 2014. Among the perceptions cited were: low prospects for improved capital outlay, sales and revenues, negative sentiments on industrial growth and heightened inflation expectations.

On monetary developments, he indicated thatBroad money (M2+) grew by 35.2 percent year-on-year at end July 2014 to GH¢31.5billion, compared with a growth of 17.1 percent in the same period last year.

Chairman of the MPC, Composite Index of Economic Activity (CIEA), Dr. Henry Kofi Wampah, Monetary Policy Committee (MPC) of the Bank of Ghana (BoG), who is also the Governor of BoG 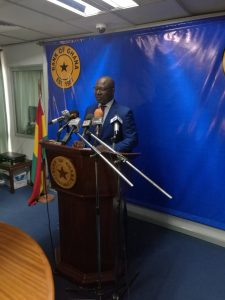