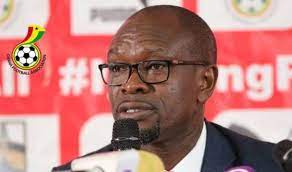 The Ghana Football Association (GFA) sacked the bumbling Black Stars coach Charles Akonnor and his entire backroom staff on Monday after an unimpressive start to the 2022 World Cup campaign as exclusively revealed by Ghanasoccernet.com four days ago.

Akonnor, David Duncan and Richard Kingson were given their marching orders on Monday evening after the Executive Committee of the GFA concluded that they cannot lead the national team to the 2022 World Cup in Qatar.

They also agreed that the former internatuonal midfielder is not the man to lead the Black Stars to glory at the Africa Cup of Nations to be played in Cameroon in four months time.

A long meeting held on Monday to examine the reports of the coaches and the Black Stars management committee forced the hands of the Executive Committee.

“The Executive Council of the Ghana Football Association has taken a decision to terminate the appointment of Black Stars Coach Charles Akonnor and his two Assistants with immediate effect,” the Ghana FA said in a statement on Monday.

“This follows the receipt of the Technical Report from the Head Coach of the Senior National Team and the report from the Black Stars Management Committee following Ghana’s Group G World Cup qualifying matches against Ethiopia and South Africa.

“The Executive Council after considering the two reports have decided to terminate its relationship with the Head Coach C. K Akonnor and the two Assistants.”

Several members of the powerful Executive Council under the condition of anonymity told Ghana’s leading football news outfit that they were unimpressed with his general performance.

Ghanasoccernet.com understands that several members who were on the trip to South Africa and also saw the Black Stars play against Ethiopia reported to the meeting that Akonnor lost the dressing room of the Black Stars.

Private conversations of Black Stars players with some management which confirms that they have no confidence in the coach will also come to the fore of the discussions.

Questionable player call-ups and contested starting line-ups all helped the GFA to decide that Akonnor will not lead the team.

The widespread public mood in the country calling for the sacking of the Akonnor was also be a factor to salvage Ghana’s qualifying campaign.

While powerful political figures thought to be the protectors of Akonnor publicly ask the GFA not to sack the coach, the GFA measured the bigger cost of Akonnor staying in the position and Ghana losing out in the World Cup qualifiers and the AFCON.

Despite the political pressure, the root and branch members of the GFA decided that Akonnor is not the man to lead Ghana to glory.

Ghana will continue their search for a place at the 2022 World Cup by playing home and away matches against Zimbabwe next month.

Only the A-J winners in each group will be able to progress to the final round for Qatar 2022 qualification.

The five remaining African nations will face off in a draw to determine the winners.

The next World Cup, which will be held in the Middle East for the first time, is scheduled to take place between 21 November and 18 December.