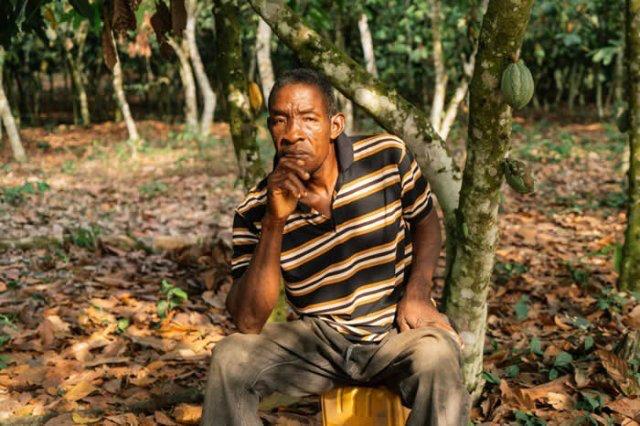 Isaac Acquaye had just sneaked up on me and given me three quick, hard knocks on my head. The whole class burst out into laughter as if stung by a venomous insect, jumped out of my seat, face and eyes turned red, rubbing my head with both hands, started yelling the words “zanzama, zanzama”.

Zanzama was a quite common game in my primary school days. Two people, mostly boys, go into an agreement to say the word to one another before taking a seat anytime one got up.

Failure to do so resulted in the other party giving hard knocks on your head until you either quickly stand up or remember to say the word to him.

It was mostly all fun and games until someone got knocked on the head so hard that it resulted in a fight. My story with Isaac was going to be no different that day until we suddenly heard our class teacher, Mr. Bawuah, yelling out “keep quiet, keep quiet” as he entered the class.

Class six A, my class, had gained a notorious reputation for being the loudest and had the most talkative students who seized every opportunity in the absence of a teacher to chit-chat and play around. His next words were, “it is time for social studies, bring out your notebooks.

Today, we are going to learn about the history of cocoa in Ghana”. I quite remember how attentive we were that afternoon when our teacher told us the story of a Ghanaian blacksmith called Tetteh Quarshie, who in 1878, smuggled cocoa beans to Gold Coast (present day Ghana) by swallowing it upon his return from a trip to Fernando Po.

The gleam on our faces was indicative of how fascinating we found this topic. Social Studies was my favorite subject. It taught us stories about our history and identity. I was usually on my best behavior during these story times as my ears always itched to hear more.

Our teacher continued to tell us how Tetteh Quarshie successfully planted these seeds on a farm in Mampong-Akwapim and how this crop eventually became an important part of the country’s export.

By 1891, cocoa beans were being exported to neighboring countries, Nigerian and Sierra Leone. Between 1910 and 1980, Ghana was the world’s first largest exporter of cocoa.

Today, Ghana provides almost half of the world’s output as the second largest producer in the world and this crop has undoubtedly been a backbone of the country’s economy. It is estimated that cocoa production and export contribute to over 30% of the country’s export earnings.

Three out of the five top export products in Ghana are cocoa beans, cocoa paste, and cocoa butter with estimated revenue of $2.27B, $382M, and $252M, respectively.

One would think that in a country where cocoa makes such significant contribution to its GDP, the government and its people will do everything in their power to protect it. It would only be disappointing but not surprising that this could be our case.

“We didn’t do anything wrong, but somehow we lost” said Nokia CEO Stephen Elop, moments before announcing that the former giant phone company had been acquired by Microsoft, sadly. What happened?

In 1998, Nokia had become the best-selling mobile phone brand in the world. Nokia’s operating profit was skyrocketing over the years and arguably, over half the world’s population were using Nokia phones.

I remember my teachers always showing off their new Nokia phones at school with customized ringtones every time they received their salary.

The most popular ringtone at the time was Batman Samini’s “Linda” song. The teachers occasionally rang each other from their various classrooms so we would hear their ring tones as a way of showing off their phones.

It was exciting to see how these phones sometimes kept our teachers in a good mood. “If you didn’t have a Nokia phone, were you even using a phone at all?”

My friends and I would jokingly say to mock people who used other phone brands. It is just like how iPhone users of today make fun of other phone users.

The beginning of Nokia’s downfall started in 2007, when Apple introduced the iPhone, and in 2010, and Samsung introduced its S series.

In the first few years, however, these new competitors barely captured a significant share of the global market at the time compared to Nokia.

Over the years, the demand for iPhones and Samsung grew bigger and most people have suggested that the iPhone and Samsung phones killed Nokia but in fact, Nokia killed itself by refusing to take the new entrants as a threat to their high sales numbers and in just six years, the market value of Nokia had declined by about 90%.

The once world’s best mobile phone company lost it all by 2013 and has since then become a case study discussed at schools in business management classes.

Now, what do Ghana, the cocoa production and export giant and Nokia, the former world’s biggest mobile phone company have in common?

In October 2020, the Chinese Academy of Tropical Agricultural Sciences (CATAS), revealed that China exported its first-ever batch of cocoa weighing 500kg worth about $3,600 to Belgium.

A researcher from the center is on record to have stated that, “with the increasing demand for chocolates, Hianan has been expanding its cocoa planting area and making a breakthrough in technological advancements.”

He further states that as Belgium is dubbed ‘kingdom of chocolates’ exports to the country indicates that their cocoa production standards have been recognized by the international community.”

Rising concerns have been made in Ghana by some who believe this news poses a great threat to our revenue in cocoa especially when this news comes at a time where cocoa production in Ghana is declining. This is partly due to illegal gold mining activities in Ghana in which these same Chinese nationals have been involved in.

Fiifi Boafo, the Public Affairs Manager of COCOBOD, which is the Ghanaian government-controlled institution that fixes the buying price for cocoa in Ghana, undermined the rising concern by stating in an interview that the quantity of cocoa being exported by the Chinese was no cause for alarm because it was less than one tonne.

He is on record to have said “it is too early for anyone to start panicking. If you consider China, they do not have that weather pattern, so it requires a bit of technology to do so.”

He also asked, “Looking at the world market price of cocoa with the deployment of that technology, will China be able to produce cocoa in commercial quantities and make a profit?”.

Ghana’s Finance Minister is also reported to have said that, “China growing cocoa can only help to achieve what isn’t there today; the Chinese taste for cocoa products.”

He believes that is a big win for Ghana because we would have found a new market for our cocoa produce. He is quoted to have further said “my sense is that they can never produce enough cocoa to meet domestic demand in China let alone export.”

I fear the current government is embarking on the regrettable journey as Nokia did. Nokia refused to acknowledge fierce competitors due to complacency and lack of foresight.

Nokia considered apple phones inferior as they run on 2G technology at the time while Nokia’s mobiles ran on 3G.

Today, we are making the same mistake by claiming that there is no cause for concern because our cocoa is of better quality than that of the Chinese.

We underestimate the power and interest of the Chinese government in the future of the cocoa market. Like Nokia, we are failing to revamp and secure the future of Ghana’s economic backbone, cocoa.

The indifference to environmental degradation, the lack of advanced agricultural tools and technologies are certainly indicative of the lack of strategy and plan to protect our position in the world market.

Do you think that China, the world’s fastest-rising economic giant and largest exporter of goods in the world since 2009, is so ignorant that, it is actively investing in cocoa production technologies to fail and not make profit?

Let us say in ten, twenty, or even thirty years from now, when the Chinese are mass producing and exporting cocoa beans and products with equal or better quality than ours across the world.

When they have succeeded in taking our place as one of the largest producers of cocoa products globally and have finally succeeded in driving down the world market price of cocoa.

When all of this causes our massive revenue from cocoa exportation to drastically decline thereby bringing our economy to its knees, would it be safe to say after we have lost it all that “we didn’t do anything wrong” just like Stephen Elop, CEO of Nokia said?