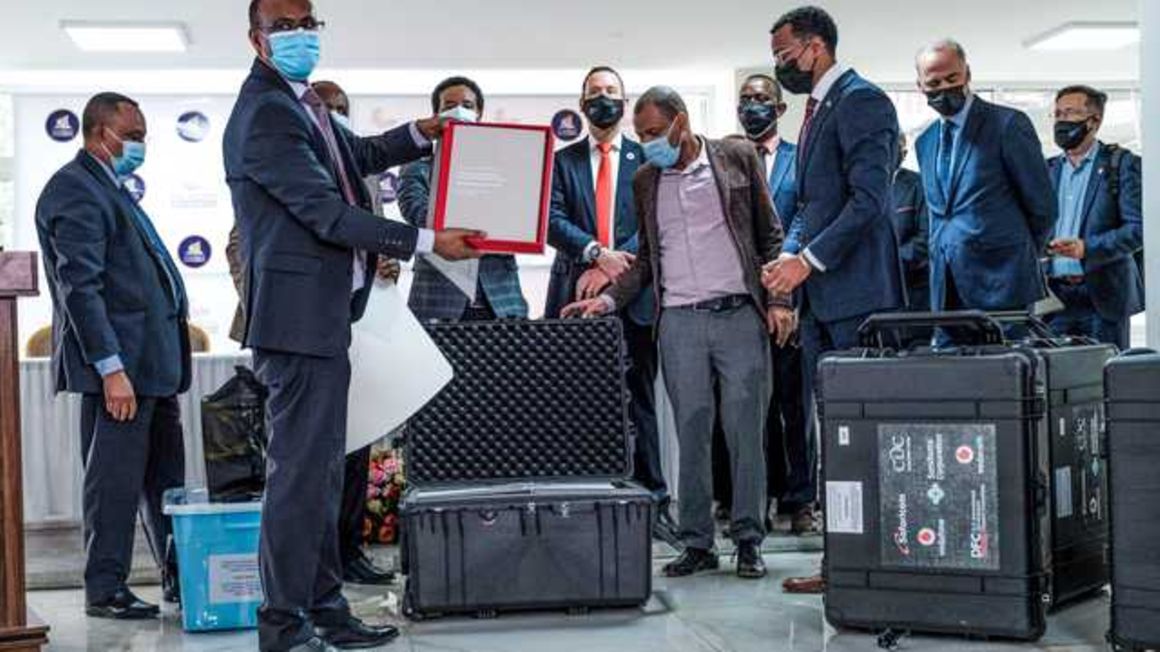 The battle for the lucrative Ethiopian telecommunications market has narrowed down to consortia led by two of Africa’s telecom giants, Vodacom and MTN Group, setting another stage for their sustained competition for the continental market.

The bids of the two consortia led by Safaricom on the one hand, and MTN Group on the other, were opened by the Ethiopian Communication Authority (ECA) evaluation committee last week.

Safaricom, Vodafone and Vodacom offer voice, messaging, data, entertainment and financial services to at least 452 million customers in Africa, Europe and India. Sumitomo Corporation’s operations include mobile telephony and development of the latest 5G technology, which is being built around the world. Safaricom launched its 5G network late March.

CDC Group, which has a £4.7 billion ($6.5 billion) war chest, is expected to help in funding the capital-intensive venture.

The consortium has also lined up a $500 million loan from America’s sovereign wealth fund US International Development Finance Corporation.

Ethiopia, Africa’s second-most populated nation after Nigeria, is forecast to expand 8.7 per cent next year, according to the International Monetary Fund, making it the fastest growing economy on the continent even as the Abiy administration battles multiple crises, including a civil conflict in the Tigray region, debt and a forex reserve crunch.

“We always wanted quality providers and this is what we have received,” Brook Taye, an adviser in the Ethiopian Finance Ministry, told Bloomberg. “These are two African giants — the Safaricom-led consortium and MTN — either one or two of the operators will get a licence in Ethiopia.”

Addis said it will review the technical offer and then open the financial bids, then announce the winner in the coming days.

The telecom licences are expected to generate around $1 billion in revenue for the Ethiopian government and will have an initial validity of 15 years, with options for renewal.

The news that Safaricom was edging closer to clinching the Addis deal saw its share price on the Nairobi Securities Exchange (NSE) close at an all-time high of Ksh39.9 ($0.37) on Wednesday. This pushed the telco’s market value to nearly Ksh1.6 trillion ($14.8 billion) – the highest level since the company started trading on the NSE on June 9, 2008.

Vodacom, which has operations in 29 countries– including Tanzania, Kenya and DR Congo — and a customer base of 120 million, has been seeking to expand its network of coverage on the continent.

Safaricom controls over 50 per cent of the total market capitalisation on the NSE, and is 35 per cent owned by Vodacom and the government of Kenya (35 per cent). Vodafone owns five per cent while the remaining 25 per cent is held by individuals and institutional investors.

Now, the telco is eyeing the Ethiopian market as it seeks new business frontiers in its pan-African expansion plan, boosted by its attractive liquidity position and the backing of both the Kenyan government, the South African giant Vodacom and parent company Vodafone.

Last year, Safaricom and Vodacom acquired the M-Pesa brand, including, product development and support services with the acquisition expected to enhance their expansion in the Africa market.

Safaricom chairman Michael Joseph would not be drawn into a discussion of their strategy for Ethiopia, even as it emerged that mobile money, their cash cow, is not on the table.

“I cannot comment at this stage. We do not have a licence yet,” Mr Joseph told The EastAfrican.

The Ethiopian government retains the right to allocate one bid or cancel the process altogether.

In April 2020 Addis indicated that only local companies would be allowed to offer mobile money transfer services in the country after the central bank sought to boost non-cash payments.

MTN Group, perhaps preparing for the anticipated new business, has increased its capital expenditure for 2021 by 1.8 per cent to $2 billion as it flexes its muscles to go to Addis to fight it out for the half of the population that has not yet subscribed to mobile phone services.

MTN has operations in 21 countries, with more than 280 million customers in Africa and the Middle East. But last year, the group announced that it was exiting the Middle East market to concentrate on the African operations.

In East Africa, MTN has footprint in Tanzania, Uganda, Rwanda, South Sudan and Kenya. In 2019, Uganda deported MTN Uganda CEO Wim Vanhelleputte and other foreign staff over “national security” concerns as Kampala and Rwanda bickered over security breaches that led to the closure of their border. He was later allowed to return. In Nigeria, MTN has been in trouble twice over tax dispute and alleged failure to disconnect unregistered users.

However, these have not dampened its resolve to seek new business on the continent.

MTN has completed a comprehensive review of its strategy and adopted a new one dubbed “Ambition 2025: Leading digital solutions for Africa’s progresses,” according to the group’s annual report (2020).

Under this plan, MTN is seeking to build the largest and most valuable business platform with a clear focus on Africa, hinging on scale connectivity and infrastructure business, making use of both mobile and fixed access networks across the consumer, enterprise and wholesale segments.

“We are enthusiastic about the opportunities presented in our markets to win in digital services and accelerate growth – Ambition 2025 has been developed to seize on these,” said group president and CEO Ralph Mupita

According to the report, MTN’s implementation of this growth strategy will be accelerated though selective partnerships and leveraging MTN’s brand as the most trusted and valued in Africa, while it will be supported and funded through enhanced cost and capital expenditure efficiencies.

Analysts at the African focused NKC African Economics, however, described the process as a “disappointment” to the Ethiopian government which had been hopeful that the telecom licences on offer to operate in Africa’s second most populous nation would attract huge interest.

“The submission of only two bids for the operating licences came as a disappointment. Ethiopia’s initial invitation to international stakeholders in May 2020 to submit expressions of interest for the telecom service licence drew considerable interest, creating expectations for more lively bidding interest.

It is undeniable, however, that the socioeconomic landscape has changed over the past six months,” say analysts in the Daily Insight Africa report dated April 28 2021.

“In our assessment the risk to trade has been escalating since the November 2020 military offensive on Tigray, while we foresee the risk space deteriorating in the lead-up to the June elections.”

The government is also pushing on with the sale of a 45 per cent stake in Ethio Telecom in a bid to open up the telecom market to competition, to ease the biting foreign reserves shortage in the country.

But analysts at NKC African Economics argue that the partial privatisation of Ethio Telecom is expected to draw more interest from the global giants, with Paris-based Orange having expressed interest in entering the Ethiopian market.

“The lower financial outlays towards infrastructure development and the benefit of a more established consumer market should underpin robust interest in Ethio Telecom’s upcoming stake sale,” they said.

Ethio Telecom’s monopoly stifled innovation, restricted network expansion, and limited the scope of services on offer for many years.

Despite the absence of market competition, there has been considerable investment in telecoms services, infrastructure, and service expansion projects in more recent years.

According to analysts, the successful procurement of a full operating licence will ensure access to Ethiopia’s 112 million people, although restrictions on banking and financial sectors imply that mobile phone-based financial services could remain out of reach.

The bid winners will be required to establish their own network infrastructure.

But of concern to investors is the political backdrop in Ethiopia, which is increasingly setting the tone for the broader risk space over the long term, spilling over into the price environment, affecting hard-currency supply, disrupting trade and threatening to foreign direct investment.

“In addition to the substantial cost outlays associated with the telecom operating licences, entrants are likely to face a difficult business environment and logistical challenges,” says the NKC African Economics report.

The Covid-19 pandemic and the eruption of conflict in Ethiopia’s Tigray region have dealt a significant blow to hopes of the rapid liberalisation of the country’s economy, although a strong long-term growth narrative for the telecoms sector remains intact, with “our ‘baseline view for ongoing rotation towards services sector expansion and eventual adoption of a more market-orientated policy framework.”

“In this regard, successful development of the telecom sector should unlock opportunities to enter the banking sector. Along with enhanced mobile technology, the (eventual) banking sector reform will deepen access to finance, close bureaucratic gaps, and reduce the time horizon for new business ventures to achieve optimal operational capacity via competitive financing offerings,” says the think tank.