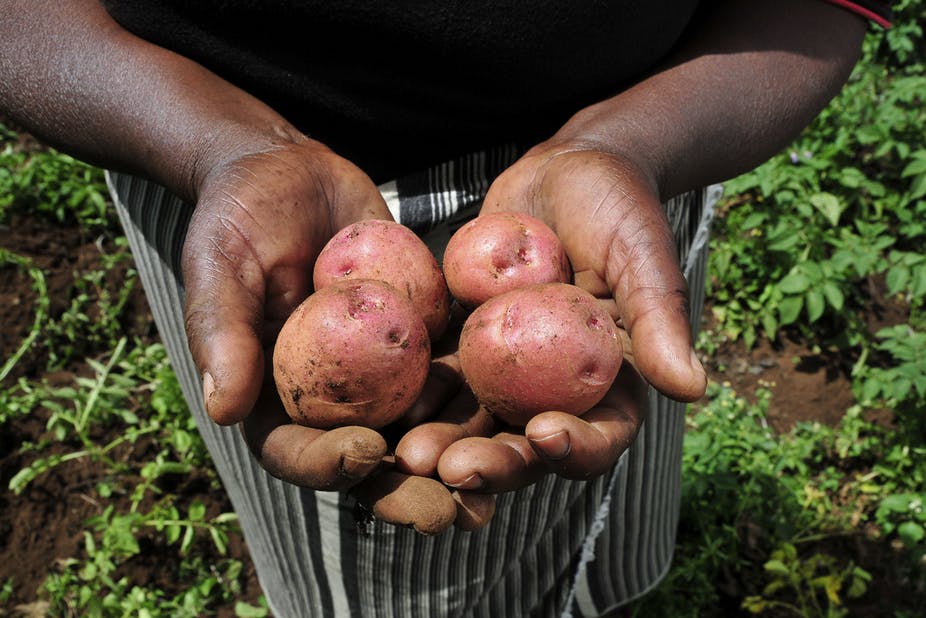 Potatoes originated in South America, where they were domesticated about 8,000 years ago. The plants were eventually brought to Europe in the mid-1500s, from where they spread to the rest of the world.

They have become a very important crop in East Africa, both as a food and economically. In Kenya alone, potatoes contribute over US$500 million to the economy annually, employing around 2.5 million people.

However, although the potato-growing area is increasing, productivity is steadily declining. This is due to various reasons including potato cyst nematodes, a microscopic type of roundworm that feeds on potato roots and lives in the soil.

They’re causing substantial losses to potato production in Kenya, and likely the region. Current estimates show that approximately US$127 million worth of losses are attributed to the nematodes in Kenya every year.

Potato cyst nematodes followed the potatoes from South America and have become established in most potato growing regions of the world. In East Africa, prevailing conditions, like the tropical climate which allows for all-year-round potato production, has led to the build-up and manifestation of the pest.

The population of nematodes in Kenya is quite remarkable. They can be up to 15-fold higher than the levels recorded in Europe, where 10 eggs per gram of soil is commonplace.

Due to the magnitude of the damage that the nematodes cause to potato production, strict quarantine regulations have been implemented across many parts of the world to contain and restrict their further spread.

But we may have found a solution: banana paper. Potatoes can be wrapped in a “banana paper”, that we devised, at planting to protect it from the worms.

The paper is made from fibre waste from harvested bananas which would otherwise have been discarded. In East Africa, bananas are plentiful – and therefore so will the fibre waste.

Potato cyst nematodes are soil dwelling and seek out plant roots to feed on once potatoes are planted. They are so-called because the female becomes filled with her brood of eggs inside her body which, upon maturity, is referred to as a cyst.

As she matures the female becomes balloon shaped, her cuticle hardens, forming a toughened cyst wall. When the female dies the cyst becomes a protective casing for the eggs which will hatch only in response to chemical signals received from growing potato roots.

Otherwise, the eggs can remain in a dormant state within the protective cyst for many years. This means that they are very difficult to manage and almost impossible to eradicate.

Once hatched the juvenile nematodes locate potatoes using chemical signals that are released from the roots. They then burrow into the root and establish a feeding site where they then suck out the contents of the cells. This damages the potato roots and reduces their growth and potato yields. In severe infestations the plant may die.

To combat these nematodes, we tested a paper made from banana fibre in Kenya, and it works. Potatoes are enclosed or wrapped in the “banana paper” at planting which protected the plant from the nematodes.

The special combination of the substances that make up the “banana paper” (the “lignin” and the “cellulose”) which allows us to apply tiny amounts of chemical nematicides, a type of chemical pesticide used to kill nematodes.

These are slowly released as the paper naturally deteriorates. The potato seed tuber, enclosed in the treated banana paper, is protected by the pesticidal activity over time, but with minimal dosages that reduce environmental contamination.

If the juvenile nematodes are unable to find their host roots their energy reserves quickly deplete and they die. This means that even without any treatment, the paper is still very effective.

And it means that the combination of interference in the signaling between the potato roots and nematodes, along with a low nematicide dosage makes for a very effective nematode management option.

In tests conducted in Kenya, potato yields were up to five-fold higher than normal farmer practice with nematode densities significantly suppressed.

There is much anticipation that the banana paper technology can provide a vehicle for the delivery of pesticides, all at ultra-low dosages, towards their more effective and efficient use and at more environmentally acceptable levels.

Research is currently underway to assess the use of the paper on other crops, such as yam, cassava and sweet potato and against other nematode pests, such as root knot nematodes and lesion nematodes.

To make this a reality there is need to demonstrate the local production of banana paper in East Africa. We’re encouraged that a local paper manufacturer has indicated that this is viable.

Meanwhile, a more extensive assessment of the paper is necessary to ensure that it is equally effective across variable climatic, ecological and soil conditions, as well as on various crops.

It is also necessary to expose the technology to farmers, to create awareness of this potential product. Farmers and agricultural staff and researchers first need to be cognisant of the potato cyst nematode pests themselves and why they need to be controlled.

Farmers are aware of declining and poor yields but do not understand the reasons behind this and that a tiny worm that is almost invisible can be responsible for such dramatic losses.

It’s been a very exciting find as banana paper could offer a realistic mechanism for managing nematode pests, and potentially other difficult-to-manage diseases and disease complexes of crops.