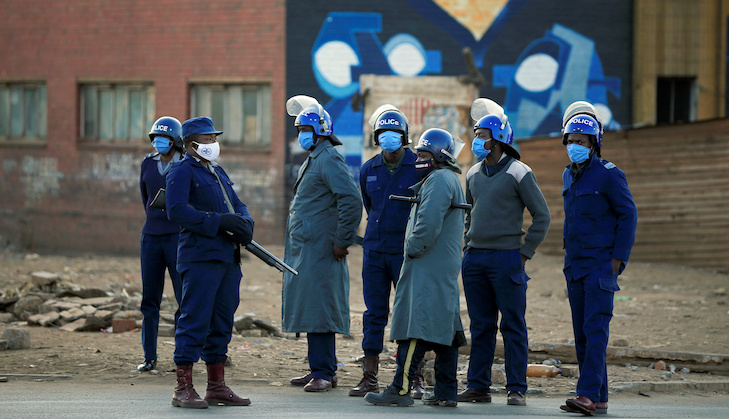 Zimbabwe President Emmerson Mnangagwa’s attempts to win over the West to his cause are failing, the latest sign being the UK’s sanctions on his security chiefs.

On Monday  1 February 2021, the United Kingdom (UK) announced that it had designated four security bosses for sanctions for human rights violations.

This was the first of the UK’s major foreign policy measures outside the European Union after Brexit on 31 January.

Mnangagwa ascended to power through a military coup that toppled his mentor and long-time ruler, the late Robert Mugabe, in November 2017.

The UK was one of the powers that supported Mnangagwa. Its then foreign secretary Boris Johnson – and current prime minister – met his counterpart, the late Sibusiso Moyo, in London on the sidelines of the Commonwealth Heads of Government meeting in April 2018.

Johnson, who was backing Zimbabwe’s re-engagement efforts with the West – mainly the country’s re-entry to the Commonwealth – praised Mnangagwa for making progress in the first 150 days in office.

Lack of economic and political reforms

In a statement, the UK said these sanctions seek to encourage the government to stop the repression of civil society and to respect human rights.

Daglous Makumbe, a lecturer in the department of political studies at the University of the Western Cape in South Africa, says the UK sanctions are a signal that the British have realised that Mnangagwa is not seeking change.

“These sanctions are coming as a signal that Zimbabwe no longer has friends in the West because when Mnangagwa came to power they [British] wanted to see if they could re-engage Zimbabwe,” he tells The Africa Report.

“These sanctions are a manifestation of what has happened since 2017 – that Mnangagwa has not fulfilled his promises.”

Tawanda Zinyama, an academic at the University of Zimbabwe, says the UK sanctions show that Mnangagwa is fast losing allies who supported him after the military coup.

“It is indeed a bad sign that the Zimbabwe administration is fast losing not only the goodwill which it had following the November 2017 military action, but also the very few friends which it had made since then,” he says.

Makumbe says sanctions are evidence that the UK will no longer engage with Zimbabwe, even in debt rescheduling. The government wants to be eligible for new lending, but it has to pay back its arrears first and the country’s economy is performing poorly, with a weakening currency and high inflation.

Contacted for comment about repayment and reengagement with the West, the foreign affairs ministry said they were “not going to issue any statements regarding that, for now.”

Moyo, who was the diplomatic face of the military coup, made efforts to charm the West but his efforts were set back by the Mnangagwa government.

Managagwa appointed former ambassador – to the UN and China – Frederick Shava as Moyo’s replacement on 8 February.

READ MORE Zimbabwe: Lockdown amid Covid surge has no support for people

Alexander Rusero, a political analyst, tells The Africa Report: “Zimbabwe’s domestic policy is bankrupt of ideas. There is a lot of confusion within the Mnangagwa regime.”

Tatenda Mashanda, a foreign policy expert at Wake Forest University in the United States, says: “We have a deeply troubled parliament, with members who lack any serious possibility of articulating Zimbabwe’s national interests and being champions of our foreign policy.”

Better luck in the East?

Zimbabwe’s ties with Asian countries including China and Russia date back to the liberation struggle.

The relationship continued after Zimbabwe’s 1980 independence as relations with the West got worse:

Mugabe turned to the East for trade and investment, but Beijing and Moscow have not blindly bankrolled the government.

Makumbe says the Mnangagwa administration has no option except to pursue the Eastern path.

“Zimbabwe will turn back to China as usual. It has no option except to be in the hands of China,” he says.

“With China, we need a clear strategy. Our investment strategy regarding the Chinese has problems – its implementation is haphazard,” says the University of Zimbabwe’s Zinyama.

Mnanagwa’s initial post-Mugabe strategy was to say that Zimbabwe was “open for business”. But his government did not change its political and economic policies to encourage business.

His team continues to blame sanctions for the country’s economic woes.

The UK’s ambassador has responded to such arguments:

Will sanctions change anything in Zimbabwe?

The University of Zimbabwe’s Zinyama says that the government is not interested in reforms aimed at pacifying the West.

Meanwhile, the University of the Western Cape’s Makumbe argues that individuals who are on the sanctions list will still be able to travel and do business with the Eastern countries.

Zimbabwe: Will Mnangagwa go East as more sanctions come in from the West? (theafricareport.com)