Hamdayet & Um Rakuba camp & Village 8, Sudan/, November 19, 2020//-The refugees trekked for days to cross the border, dodging airstrikes and well-armed soldiers in their country’s escalating civil war. Many are now sleeping out in the open in isolated towns, or under trees in a dusty displacement camp unused for decades.

As conflict rages in Ethiopia’s northern Tigray region, a fast-growing refugee crisis is building in the eastern provinces of neighbouring Sudan: Almost 40,000 people have sought safety over the past two weeks, and many more are expected in the days ahead.

At a newly opened camp and at the two main refugee transit points along Sudan’s border with Ethiopia, The New Humanitarian found little aid awaiting new arrivals, who shared harrowing stories of escaping airstrikes and militias back home in Tigray.

“When the air bombing and the attacks began, I just ran and left the majority of my family behind,” said 22-year-old Zanabi Fasaha, who arrived on Sunday after fleeing Humera, a town close to Sudan’s border. “I’m here now without family, money, food, or any assistance.”

Several humanitarian organisations are on the ground in eastern Sudan, setting up water points and distributing food and materials for refugees to build temporary shelters, while Sudanese authorities and local communities are also involved in the aid effort.

But the pace of new arrivals has overwhelmed the capacity of aid groups, according to the UN’s refugee agency, UNHCR. 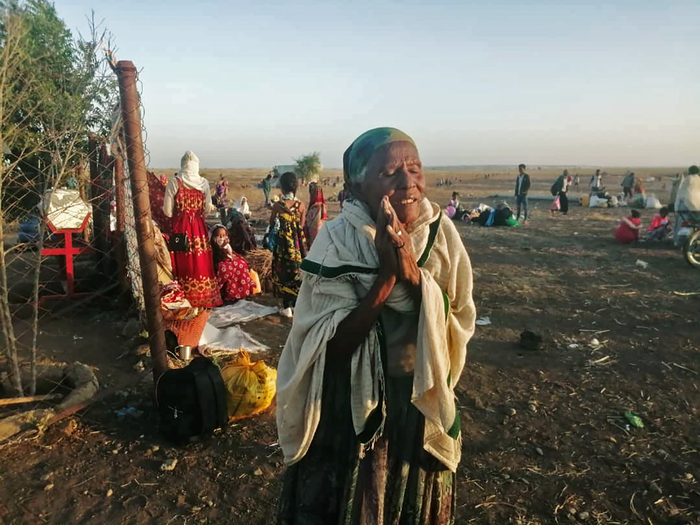 Mohammed Amin/TNH
Sixty-five-year-old Tishpho Gabriel said she “witnessed horrible things” when fighting broke out in her town of Humera, close to the Sudanese border. More than two weeks of clashes have left hundreds dead in the northern Tigray region.

Only basic relief items such as high-energy biscuits, blankets, mats, and soap have been provided so far as greater food and shelter supplies need to be trucked in from bigger cities in Sudan.

The conflict in Tigray, which has already claimed hundreds of lives, began when Ethiopia’s federal government accused the northern region’s ruling party, the Tigray People’s Liberation Front (TPLF), of an attack at a military camp – a charge the TPLF denies.

Ethiopia’s government claims its forces have since launched airstrikes and assaults on land against military forces aligned to the Tigrayan party – the dominant force in Ethiopian politics until the country’s Nobel Peace Prize-winning Prime Minister Abiy Ahmed took office in April 2018.

But the testimonies of half a dozen Tigrayan refugees interviewed by TNH challenge the government’s account of events, with the refugees all accusing the Ethiopian army and allied militias of killing civilians.

TNH cannot independently verify the claims made by the refugees because phone and internet connections have been cut in Tigray, and movement into the area is restricted. The Ethiopian government and rights groups have also accused TPLF-aligned forces of committing massacres.

On Tuesday, Abiy said the Ethiopian military had begun its “final and crucial” offensive to capture the capital of the Tigray region, Mekelle, though analysts predict a drawn-out conflict that could destabilise the wider region.

The TPLF’s regional forces and local militias are thought to number up to 250,000 between them. The Ethiopian army, meanwhile, has around 150,000 well-trained troops, and more than a dozen fighter jets and helicopter gunships.

The UN’s emergency aid coordination body, OCHA, said tens of thousands of people have been displaced inside Tigray, though few are likely to be receiving aid, given restrictions on the roads in and out of the region.

In Sudan, Tigrayans – many of whom said this was their second or third time as refugees, having fled the long 1974-1991 civil war in Ethiopia, and the bloody 1998-2000 conflict with Eritrea – arrived with alarming stories.

Some of the accounts suggested that killings at Mai-Kadra – the scene of a massacre in western Tigray widely blamed on TPLF-aligned militia – were the work of Amhara militia aligned with the government.

Tikhlai Abraham, a 40-year-old woman from Mai-Kadra, said the area came under “continuous attack” from warplanes, tanks, and militia fighters from the neighbouring region of Amhara, which is supporting the government’s offensive.

Abraham said her house was flattened shortly after her family left it. While fleeing, she said she saw the bodies of two dead children on the ground. She blamed “brutal militias [for] slaughtering the people, including the children.”

“I suffered a lot, and my sons carried me sometimes”

Two other refugees from Mai-Kadra shared similar accounts of the violence. Wargi Amana, a 35-year-old, said she saw the house of one of her neighbours collapse while the family was inside.

Amana told TNH she was separated from her husband and from all but one of her three children, while fleeing the attacks. “I don’t know if they crossed the border or are still in Ethiopia,” she said. “I can’t go back… because the killing is ongoing and I have to protect the only child that is in my hands.”

Refugees from other areas of Tigray told TNH similar stories.

Sixty-five-year-old Tishpho Gabriel said she had “witnessed horrible things” in Humera, a town close to the Sudanese border that has seen particularly heavy fighting. These included Amhara fighters attacking “families using… light and heavy weapons [and] slaughtering [people with] knives”.

Gabriel said Ethiopian troops and Amhara militiamen had pursued refugees fleeing towards the border and tried to prevent them from crossing. “The trip was very hard for me as an old woman,” she said. “I suffered a lot, and my sons carried me sometimes.”

Jens Hesemann, UNHCR’s assistant representative in Sudan, told TNH that several UN agencies are responding to the crisis. Other aid groups, including Muslim Aid and the Sudanese Red Crescent Society, are also present.

Hesemann said most refugees were converging in two border areas – a town of roughly 5,000 people called Hamdayet that has a small transit centre managed by UNHCR, and a hamlet of 4,000 houses called Village 8.

Both places have quickly reached capacity. The Hamdayet transit centre can accommodate a few hundred refugees, but thousands have arrived in the town after taking boats or wading through the waist-high water of the nearby Tekeze River. 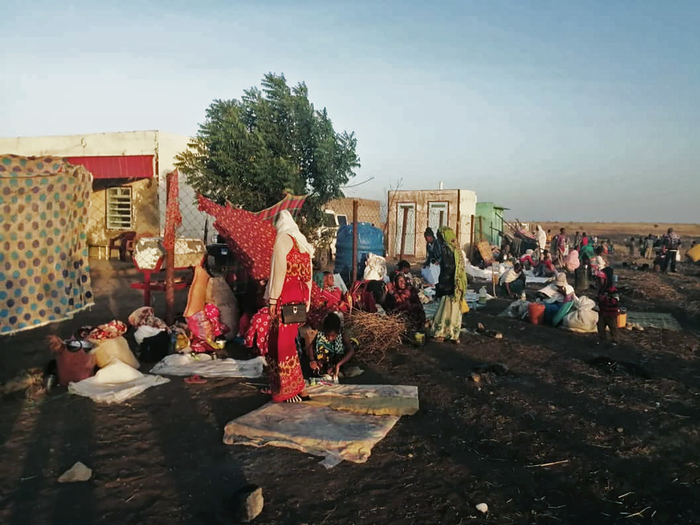 Mohammed Amin/TNH
Tigrayan refugees congregate in the border town of Hamdayet, which has a small transit centre managed by the UN’s refugee agency. Aid groups say they have been quickly overwhelmed by the pace of new arrivals.

In Village 8, which is a roughly three-hour drive from Hamdayet, refugees have occupied around 800 housing units that were empty prior to their arrival, though many are still sleeping outside using mats and blankets lugged across the border.

Efforts to provide aid in Village 8, and to relocate the refugees to a larger camp, have been complicated by access constraints: A slow-moving ferry across a river is required to reach the settlement, which Hesemann said was originally built to house local residents displaced by a dam project.

“It is a very difficult situation, and we haven’t done enough yet,” said Hesemann.

Thousands of refugees staying in Hamdayet have been taken to an existing camp called Um Rakuba, which was built in the 1980s to house Ethiopians fleeing famine and was closed in the early 2000s.

The isolated camp has the capacity to host around 6,000 people, according to Hesemann, but cannot be expanded at the moment because of unharvested agricultural land surrounding the site.

Shelter kits for refugees at Um Rakuba are expected to arrive next week, according to Hesemann. For now, the UN official said residents are building temporary shelters using plastic sheeting and sticks provided by aid groups.

“We thank Sudan for its efforts to assist us with food and clean water, but the situation is bad and there are no services in this camp,” said Halima Burham, a 30-year-old Tigrayan refugee who recently arrived in Um Rakuba.

Alrasheed Aldaw, a government official from Sudan’s Humanitarian Aid Commission, told TNH at Village 8 on Sunday that eight other existing refugee camps in the eastern states of Kassala and Gedaref could be used if more refugees arrive. One camp in Gedaref appears to have already been identified.

Axel Bisschop, UNHCR’s top official in Sudan, said on Sunday that the agency is making plans for up to 100,000 refugees crossing the border – an influx not seen in eastern Sudan for the past two decades.

While local communities provided the bulk of the initial support in areas like Village 8, some residents told TNH they fear the influx could put a strain on the country, which is experiencing its own fragile political transition.

Read more → Battling the generals: A briefing on Sudan’s transition to democracy

Ahmed Alhaj, a 59-year-old local resident who lives four kilometres from Village 8, said the new arrivals could create tensions with host communities. “Sudan is already suffering…” he said. “The resources are already diminishing.”

On Wednesday, the leader of the TPLF, Debretsion Gebremichael, vowed not to surrender to federal troops as he called for Tigrayans to mobilise in greater numbers against the government. “Tigray is now a hell to its enemies,” Gebremichael said.

As the conflict escalates, Tirhas Nuham, a 35-year-old from Mai-Kadra who has spent the majority of her life in Sudan having fled to the country twice before, said civilians should not be targeted.

“We are normal citizens and we have nothing to do with politics,” Nuham said. “We have the right to live [in Ethiopia] and not to be forced to leave.”