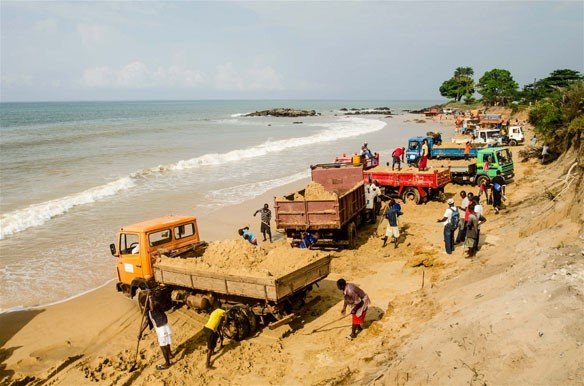 Accra, Ghana//-There are intensive activities of illegal sand winning/mining activities in some communities in the coastal regions of Ghana exposing the vast vegetation, tourist facilities, lives and farmlands to the ravages of the degradation.

This unfortunate development is happening at the full glare of the security services and the Environmental Protection Agency (EPA); but who are doing very little to stop the situation.

Sand mining occurs when people scoop sand from the beaches mainly for construction. It is ‘supposedly’ illegal.

However, people have persisted in this venture dating back to the pre-independence era. This activity has been identified to be widespread across all four coastal regions.

Investigations conducted reveals that, the illegal sand winning activity is seriously being carried out in areas like Kpoglo, a community in Aflao on a vast land located few metres away from the CEPS Barracks in Kpoglo,  Keta, in the Volta Region.

Ada , Prampram , Chorkor  Gbegbeise, Faana  and surrounding areas  in the Greater Accra Region,  some areas in the Central and Western regions of Ghana.

Along the Moree to Elmina stretch of coastline, almost every pocket of sandy beach is mined by commercial contractors or by groups of individuals who either pack them in bags before transporting or mould blocks on the beaches for sale.

It is evidently clear that the rate of replenishment of sand from the sea is less than the rate of extraction. The difference manifested itself in the rapid erosion and vast degradation of the land.

The act is however gradually but steadily endangering the lives of the people residing along the communities and even those residing many miles away.

Another major impact of sand mining is the loss of protection from storm surges associated with tropical cyclones and tsunamis.

There are fears that the communities which are severely being hit by the activities of these illegal sand miners will be faced with strong tidal waves, which may sweep away homes and destroy properties.

The government would be looking for billions of dollars for sea defence projects to protect vital national assets and coastal communities. This looks grim but that is the future we are creating for ourselves through our own actions.

If we seek to avoid this, then we must urgently take pragmatic steps to stop our actions and change attitudes that have contributed to the long-standing impacts on the coastline of Ghana.

Issues to do with the management of the coastal zone should not be handled half heartedly because the sea may not be as lenient to us as the others we have degraded.

We have some of the best coastlines in West Africa. As compared to our neighbouring coastal countries, Ghana has long stretches of beautiful sandy beaches that have attracted tourists all over the world for decades.

In the Central Region, coastal tourism is perceived as a major potential for job creation. Our coastline like most coastlines the world over have been identified to be eating into land over the last few decades. This is a result of both natural and human-induced factors.

Naturally, these changes arise through the normal sea-land interaction and also through climate change and global warming leading to sea-level rise.

For the Ghanaian coastline, current research predicts that global warming and its attendant sea-level rise contributes to only a few millimetres of coastline change per year.

For the Moree, Cape Coast and Elmina area could only have resulted through human activities which have accelerated the natural causes of coastal erosion.

The implications of these trends transcend to the fishery, tourism and marine transportation sectors as well as affects the safety of coastal residents and infrastructure.

It has been established and accepted by coastal scientist the world over that human activities are responsible for the accelerated coastal erosion and degradation of most coastlines.

These activities include building too close to the beach, sand mining (winning) and sea defence construction. It is clear that if the first two factors are controlled, there will not be the need to undertake most sea defence projects along coastal Ghana.

Currently, several coastal communities across the country experience the intrusion of the sea in their homes during storms and, especially, the rainy season.

If we are to investigate, we will establish that most of these communities have engaged in beach sand winning in the past and sometimes continue to do so even as their homes are flooded seasonally.

In Cape Coast and its surrounding coastal communities where tourism is a major part of the local economy, sand mining has contributed to the degradation that is evident on most of the beaches.

It is often surprising, disheartening and even embarrassing to see people scooping sand on the very beaches where tourists and holiday makers are relaxing.

The coast is a dynamic system which is closely linked with the sea, rivers and coastal dunes through the exchange of sand and nutrients. This link allows the coast to maintain equilibrium even after large volumes of sand have been taken.

This natural process has been perceived by most sand winners that there is an infinite amount of sand available on the beach, since hours after they create large hollows on the beaches they become filled with sand.

Currently, every owner of a beach front facility and some coastal communities are left to undertake their own forms of coastal defence when they experience the wrath of the Atlantic Ocean.

Such practices are not sustainable, since the measures which are usually undertaken do not agree with the wider coastal geomorphology and tend to exacerbate the situation.

At these current rates of coastline erosion and activities of sand miners, several more communities are going to be made more vulnerable to flooding in the years to come.

The central government will then be called upon to salvage the situation. It just does not make practical and economic sense to spend huge amounts of monies on coastal defence projects without eliminating the major human factors that cause them.

I often wonder what it takes to arrest and prosecute these environmental offenders? These people operate in our towns; they pass through police checkpoints. They undertake these activities mostly in broad daylight.

The excuse of under capacity and lack of equipment does not suffice here. Why can’t we arrest some of these contractors and offenders, prosecute them, sell their trucks and punish them with some community service (let them clean the beaches)? These will obviously serve as a deterrent.

It baffles me when I hear our leaders lament the state of our environment. We know the right things that must be done to ensure our environmental sustainability. We only have to be brave to enforce them.

It is time to develop a new consciousness and approach to our environments. We must not sit idle and wait for the doomsday before we act.

As Ghanaians, we should be responsible for our environments and ensure that the next generation, whom we have borrowed the resources of Ghana from; do not come only to clean up our mess.

When that day comes where our beaches will be no more; when the country will be saddled with looking for resources to protect coastal assets, all of us Ghanaians will bear those costs. Therefore, why not speak up now and ensure the right thing is done?

Marine sand mining is becoming an increasingly popular way to meet the global demand for sand, but unfortunately the current international legal framework governing the extraction process has been unable to prevent serious damage to the marine environment.

Sand has long been an important resource in our global economy. Spurred by our insatiable appetite for development and the construction projects necessary to meet it, sand has become the second most consumed natural resource in the world after fresh water.

A large part of the increased global demand for sand stems from it being a main component in construction materials such as cement and brick, but its diversity of uses in glass, plastics and technology components have also contributed to its increased demand.

A consequence of the increased demand for sand has been the depletion of some countries’ terrestrials and reserves and an increasing need for alternate sources of sand such as marine sand and seabed aggregate.

One might question the need for marine sand when some countries have vast amounts of desert sand at their fingertips. Unfortunately, not all types of sand can be used for all purposes.

Wind is a much more abrasive force than water, and as a result, desert sand consists of significantly finer and smoother grains than marine sand.

These results in desert sand being unsuitable for most construction uses as the smooth grains are not able to stick together as effectively.

This means that marine sand has become a much more necessary and profitable commodity even though it must be washed of the corrosive salt content before it can be used to make cement and other construction material.

The coarseness and consistency of sea sand also makes it a suitable material for large-scale land reclamation initiatives. These efforts to artificially extend countries’coast lines have been a major player in the demand for marine sand.

Some of the first land reclamation projects were to expand ports and harbours to increase ship access and improve the flow of trade. More recently, with population pressures and as urban land prices skyrocket, countries like Singapore.

International treaties drafted to protect the marine environment were largely driven by concerns over pollution from ships and land-based sources.

As a result, the early treaties were often focused on pollution prevention and abatement, but have evolved to include conservation efforts and the protection of biodiversity.

United Nations Convention on the Law of the Sea UNCLOS is a comprehensive legally binding convention that was established with the goal of bringing legal order to the sea and promoting the peaceful, equitable and efficient use of its resources while striving to protect and preserve the marine environment.

It was adopted in 1982 and has since been ratified by 168 parties. Article 192 gives States a wide ranging and unfettered obligation to protect and preserve the marine environment.

UNCLOS also delineates the maritime zones that provide coastal states with the sovereign rights to explore, exploit, manage and conserve the natural resources of the seabed and its subsoil.

Articles 208 and 214 call for coastal states to adopt and enforce laws and regulations to “prevent, reduce and control pollution of the marine environment arising from or in connection with seabed activities subject to their jurisdiction”.

UNCLOS also contains a provision mandating the monitoring of risks and effects of pollution of the marine environment and requiring the results be compiled into reports, published and made available to the international community.

States are also compelled to undertake environmental assessments when the State has “reasonable grounds for believing that planned activities under their jurisdiction or control may cause substantial pollution of or significant and harmful changes to the marine environment”.

These are also important measures for protecting the marine environment from pollution, but by leaving the extent of the monitoring and environmental assessment to the discretion of the member parties, their effectiveness remains tied to the member country’s national regulatory efforts.

As a binding treaty, UNCLOS contains provisions outlining the responsibility and liability for ratifying states in respect to their commitments to protect and preserve the marine environment.

Article 235 clearly provides that all parties are responsible for fulfilling these obligations under the convention and are consequently liable in accordance with international law.

Despite the liability provisions, few countries have been held accountable under UNCLOS for the environmental damage their dredging and land reclamation activities have caused.

This is largely because countries have been reluctant to initiate a dispute under UNCLOS for environmental damage resulting from these activities unless the activities also threatened their sovereignty.