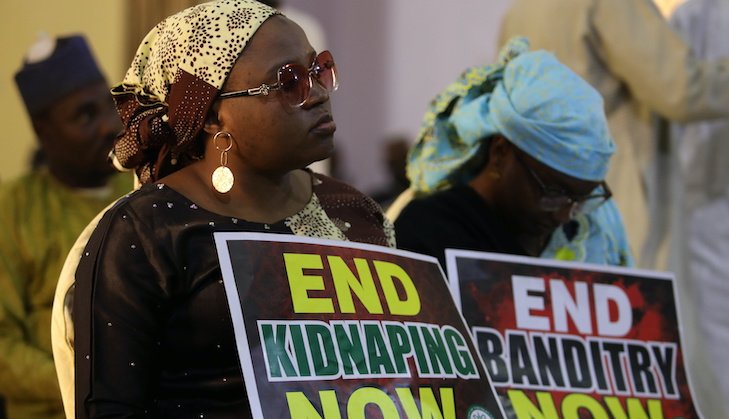 Eleven days into the new year of 2021, an unusual tale of two kidnappers was told by the Nigeria Police spokesperson Frank Mba.

Mohammed Amodu, a fearsome kidnapper active in the capital city, fell victim to a kidnapping by a relatively unknown kidnapper, Buba Babu. The kidnappers received more than N1.6m ($3,300) in ransom to secure Amodu’s release.

The bizarre event of the kidnapper falling victim to his trade follows the recent kidnapping of more than 300 school boys a few kilometers away from where President Muhammadu Buhari had gone on his end-of-year vacation.

There are many signs that government efforts to fight criminality, kidnapping and rebel activity are not producing results.

A few weeks prior to the school kidnapping, Boko Haram extremists admitted to killing more than 100 rice farmers in Borno State, in retribution for farmers cooperating with the Nigerian military.

The attack, staged at a rice field in Garin Kwashebe, occurred on a local government councillor election day, the first to be held in 13 years since the extremists launched an insurgency in the area.

Data from SBM Intelligence shows that between January and November 2020, there were 142 incidents in the Boko Haram insurgency in north-east Nigeria, an average of 13 a month.

READ MORE Nigeria is not a failed state, but it has not delivered democracy

At least 1,606 people were killed in 125 fatal incidents, an average of 13 per incident, suggesting that Nigeria is the third-most terrorised countries in the world, according to the Global Terrorism Index released on 27 November 2020.

As a symbol, the 2021 kidnapping of Mohammed Amodu, a “notorious kidnapper” and third in command of a kidnapping syndicate, suggests that Nigeria’s security challenges could remain largely unchanged in 2021.

SBM’s The Year Ahead report argues: “The problem of ungoverned spaces in Nigeria will become more pronounced in urban centres, and non-state actors will take advantage of these gaps to entrench themselves deeper in society.”

Olumide Adesina, a member of the Chartered Financial Analyst Society, says that is likely that Nigeria will see a further dip indirect investments until at least the first quarter of 2021 because of the insecurity.

Foreign direct investment in Nigeria fell by 29% or $1.2bn in 2020 due to the coronavirus pandemic, according to a report from the United Nations Conference on Trade and Development. Growing insecurity will likely see investors staying out of Nigeria’s financial markets, adds Adesina.

Lagos-based Adesina tells The Africa Report: “It’s critical to note that certain aspects of Nigeria’s financial markets are largely affected by the prevailing violence sited in the northern part of Nigeria, as over the years the foreign portfolio investors have increasingly gone wary on the growing unrest in major agricultural hubs of Nigeria. Investors hearing such [news] about Nigeria’s rising insecurity and unrest [are] changing their plans because issues of rising security are paramount to international investors.

He continues: “While this is happening, some Nigerian consumer staples stocks with high exposure in such affected regions have had their shares underperforming in spite of the bullish trend prevailing at the world’s best stock market on the account it’s not safe for industrial processing and distribution.”

Halogen Group, a security company in Lagos, predicts that “there will be few more sporadic attacks on public infrastructure and places.” It argues that they will most likely occur in Lagos State, the country’s commercial capital, and possibly other south-western states.

According to the security company, retailers, especially of high-valued items are at “high risk rating regarding their potentials for attack” till at least the first quarter of the year, while “some high-net-worth individuals will become targets – some planned and some opportunistic.”

Halogen Group sees the insecurity “crisis” as impacting “negatively on direct investment” especially on “Lagos, which contributes approximately 30% to Nigeria’s gross domestic product (GDP) and host to over 50% of Nigeria’s non-oil industrial capacity.”

Drawing from the fallout from the #EndSARS protests, in which the Lagos State government said it lost at least N234m due to the closure of the Lekki toll gates during protests; as well as an an estimated N700 billion ($1.8 billion) lost to the Nigerian economy in the first twelve days for the protest per Lagos Chamber of Commerce and Industry, Halogen Group sees “anti-government sentiments” as being high in Nigeria, which makes “sporadic actions against public establishments” easy.

The country is still reeling from the global pandemic impacts that led to a second recession in less than six years of President Muhammadu Buhari’s rule as a democrat. And the impact of rising insecurity in the country of 200 million is dire, says Wale Adeboye, a security expert.

Adeboye says the insecurity situation in the country is “acute”. According to him, “when you read the Nigeria Situation Report of 4 January 2021 on Relief Web, the forecast is that up to 5.1 million people risk being critically food insecure between June-August 2021. Now this is coupled with the fact that Nigeria is already in another wave of Covid-19 infections.”

He continues: “You can see from two human security angles of food and health why I said our security situation is acute. I deliberately did not start from the political and community security angles through which the year 2020 showed to us that Nigeria’s cup of violence was probably full.

For years, some of us have spoken continuously about Nigeria being on the precipice. It took both Covid-19 and the #EndSARS protests to prove us right. This is not to mention the growing threats by bandits in the north-west and time to time attacks by Boko Haram in the north-east.”

Another key area affected by the insecurity in the north, says Adesina, “is the tourism industry. Hospitality stocks have also underperformed on the bias of human activities as significantly reduced on recent attacks sighted in key tourist areas and lately educational centres thereby disrupting human mobility in certain areas of northern Nigeria.

Also, certain companies with high exposure to educational segments, are most likely to underperform than other key sectors like defence on the bias that the Nigerian federal government allocated a much lower figure of N545bn when compared to over N1.4trn allocated to defence, police affairs, and interior sectors.”

He adds: “The above analysis is a situation where funds allocated to security alone are almost equal to funds allocated to education, health and critical infrastructure combined in a fiscal year; this is detrimental to national development. The development of a society largely depends on the rate of crime. If the crime rate is high, it always scares away or discourages investors from coming to Nigeria to do business.”

According to Adeboye, “There is no doubt that 2021 will be more challenging in terms of security.” But, “if we have a smart-thinking government the situation at the moment presents golden opportunities to initiate and implement reforms in our security architectures and components. When people are pushed to the wall like Nigeria has done to its people, residents become receptive to opportunities to try new ideas. In my honest opinion, therefore, this is the time that the political leadership should make firm commitment towards human security-centred security and protection,” he explains.

READ MORE The colonial enterprise hard-baked violence in Nigeria: how it can be fixed

The SBM analysts predict that the stalemate between the Nigerian military and Boko Haram  will continue in 2021. “More states will be brought into the conflict as terrorists are looking to expand into the north-central.

The military would be fighting on several fronts – the north-east (with Gombe seeing more attacks) and the north-central, especially states like Nasarawa and Niger,” it adds.

As militant activities are likely to become more pronounced in 2021, “insecurity will continue to remain a daunting challenge with more attacks in urban areas across the country, as people looking to escape attacks in villages and towns will crowd the urban environment for security.

In the north-central and north-west, more clashes between bandits, farmers and herders, and local communities should be expected,” SBM wrote in its report.

By Ruth Olurounbi, in Abuja

Nigeria: Will insecurity, kidnapping and crime get worse in 2021? (theafricareport.com)