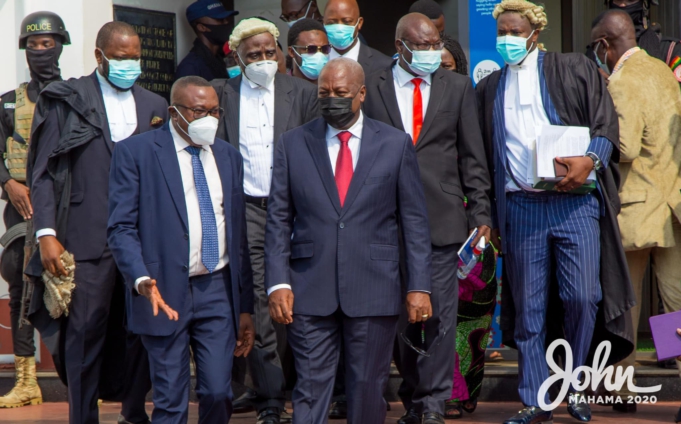 The petitioner, John Mahama wanted the request granted so the Chairperson of the Electoral Commission, Jean Mensa could be subpoenaed to testify in the ongoing election petition.

But reading the ruling of the court, Tuesday, February 16, Chief Justice, Kwasi Anin-Yeboah, said the petitioner’s legal team has failed to indicate how the evidence they intend to solicit from the EC Chairperson will help to determine the case.

Again, the Chief Justice explained that the EC Chairperson is not on trial hence she cannot be asked to vindicate herself adding that the success of the petitioner’s case is dependent on his own evidence.

But objecting to the ruling by the 7-member panel of judges made up of Chief Justice Anin-Yeboah; Justices Yaw Appau, Marful Sau, Professor Ashie Kotei, Mariama Owusu, Nene Amegatcher, and Gertrude Tokonor, Lawyer Tsikata said the new applications were being filed while the Chief Justice was reading out the ruling on the reopening of case.

These new motions, he said included a review of the ruling by the court on February 11, that the EC Chair cannot be compelled to mount the witness box and a stay of proceedings pending the hearing of the review application.

Acknowledging the submission, Chief Justice Anin Yeboah said the court will move the motions for the two applications filed by the petitioner after a date has been given by the registrar.

Mr. Mahama is at the apex court seeking an order for a re-run of the 2020 Presidential election between himself and President Nana Akufo-Addo, the candidate for the New Patriotic Party.

He alleges issues of irregularities and vote padding while arguing that no candidate obtained more than 50% of the votes cast in the December 7, 2020 election.