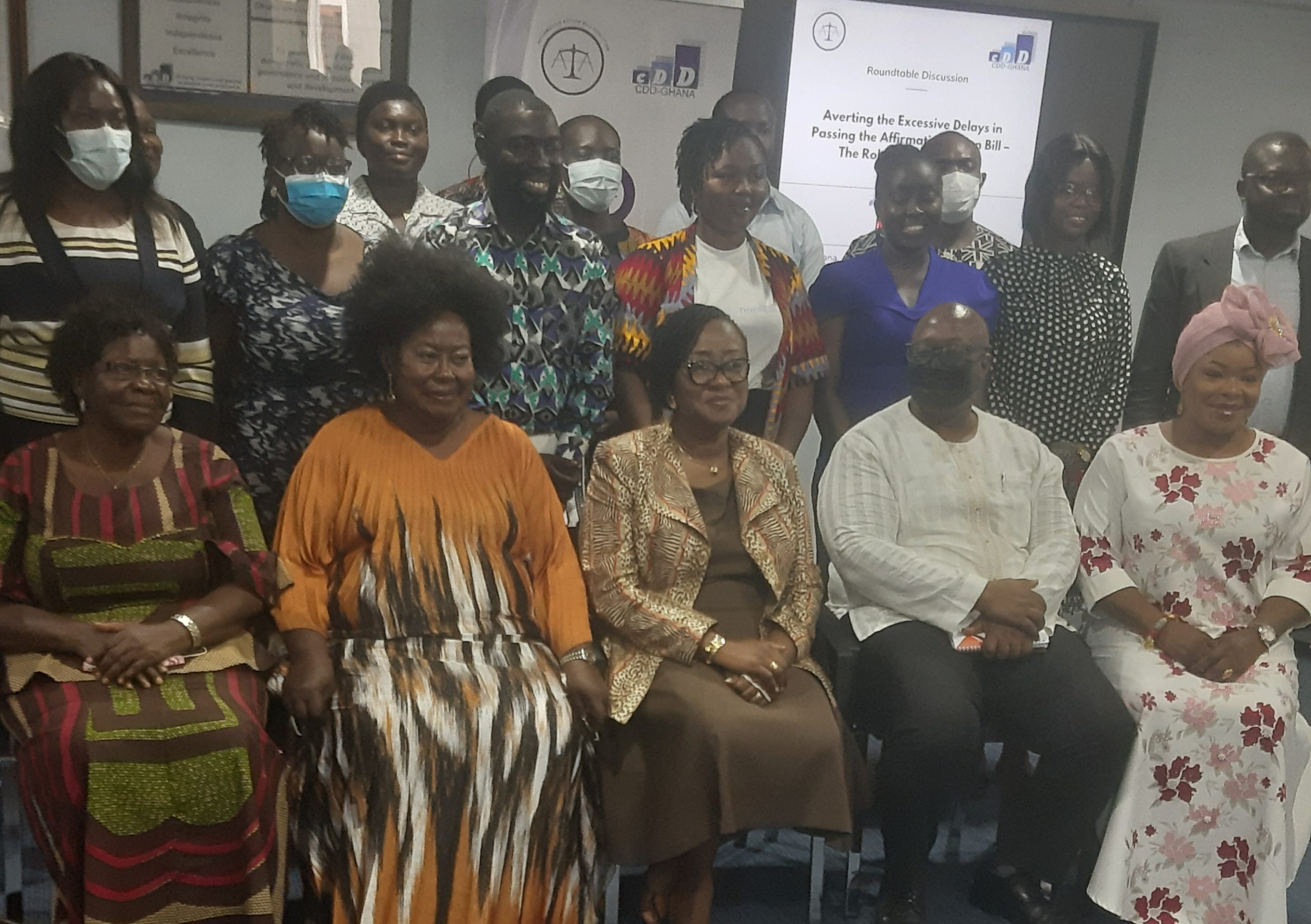 Accra, Ghana//-Civil Society Organisations (CSOs) have expressed concern that the absence of a substantive minister for the Ministry of Gender, Children and Social Protection is thwarting efforts in the push for the passage of the long-awaited Affirmative Action Bill (AAB) into law.

The bill which has been gathering dust at the Cabinet of President Nana Addo Dankwa Akufo-Addo since 2020 could have been pushed if there were the minister for Gender, Sarah Adwoa Sarfo, the CSOs lament at a day’s roundtable discussion organized by Ghana Centre for Democratic Development (CDD-Ghana) in Accra.

However Madam Sarfo who is also the Member of Parliament (MP) for Dome-Kwabenya is currently in the United States (US) to take care of her alleged sick son there.

The CSOs therefore call on Mr Akufo-Addo as a matter of urgency to appoint a substantive minister for that ministry to push the agenda for the passage of the bill into law for the inclusive socio-economic development of the country.

Although the Caretaker minister of the Gender ministry, Madam Cecilia Abena Dapaah who is the Minister of Sanitation and Water Resources, is doing her best to push for the passage of the bill into law, her hands are full of addressing sanitation and water resources issues in the West African country.

Speaking at the event themed-‘Averting the excessive delay in passing the Affirmative Action Bill – The Role of Stakeholders’, Convener of Affirmative Action Bill (AAB), Sheila Minkah-Premo, says the sector minister who should have supervised the processes of the bill to become a law is not around, calls on the government to show a strong political will by passing the bill into law now!

Updating the participants on the status of the bill, she notes the journey of affirmative action dates back to Ghana’s independence; however the drafting of Ghana’s Affirmative Action Law began as far back as the year 2011. However, till date, the bill is yet not passed into law despite incessant pressure from CSOs.

What is the Affirmative Action Bill?

According to her, Affirmative Action is a temporary mechanism aimed at removing discrimination, improving the rights of marginalised groups, who have been historically disadvantaged.

So, Ghana’s Affirmative Action Law seeks to remove the historical low representation of women in all decision-making spaces, while promoting democracy and development through effective participation of all citizens.

Madam Minkah-Premo adds Affirmative Action seeks to promote women’s representation to a minimum of 40% in all policy making spaces.

The AA Bill when passed into law, she argues, would provide an accountability framework for gender equality and the empowerment of women aimed at providing both the executive and legislative benchmark for measuring the commitment and progress of the country towards achieving gender equality.

1992 Constitution, others support the bill

The bill is in line with Article 17(4) of the 1992 Constitution and in compliance with country’s international human rights obligations, including the U.N Sustainable Development Goals (SGDs) – particularly Goal 5, the U.N Convention on the Elimination of all forms of Discrimination against Women (CEDAW), Beijing Declaration, and the African Union Agenda 2063.

Results of Ghana’s 2020 elections indicated that only 40 women made it into the 275-member Parliament, a situation which she believes demonstrates the persistence of gender inequality in the country.

Barriers to low representation of women

The convener is emphatic that the barriers impeding women from engaging in active politics include domestic duties, religious, finance, and the acrimonious and boisterous nature of politics in Ghana.

What should be done?

The Founder and Convener of the Alliance for Women in Media Africa (AWMA), Madam Shamima Muslim who chaired the discussions, appeals to her colleague campaigners for the passage of the bill to do their best to explain the bill to the public that would resolve to its acceptability.

The Director of Advocacy and Policy Engagement at CDD-Ghana, Dr Kojo Asante Pumpuni, calls for sustained advocacy and the setting up of a secretariat with people who have the technical knowledge to explain issues to everybody to buy into the campaign.

A broadcast journalist at Multimedia, Madam Emefa Ampaw urges the media to lead the conversation in the struggle for the passage of the Affirmative Action Bill, saying the bill is critical for the evenly distribution of the country’s resources among men and women.