Accra, Ghana//-She was born and grew up during the civil war in Lebanon – you can imagine how challenging that was. Having machine guns and hand grenades on the dining table was normal.

Talks about death, hatred and fear dominated daily discussions at that time. She and other nationals had to survive on the truly bare minimum – shortage of food and clean water and no electricity.

“When we made it to school, we had to be prepared for the harsh reality that we may not be able to make it home at the end of the day and there were instances when me and my brothers escaped by miracle, either from a heartless sniper or a bomb that exploded near the school bus. Sadly, many other children were not that lucky”.

In the midst of that dark phase, Dr Carole Nakhle has become a global energy icon whose expertise and advice are sought-after across the globe.

She is an internationally recognised authority on the interplay between geopolitics, economics, energy and governance.

Dr Nakhle worked with major oil and gas companies (Eni and Statoil) at the executive level, governments and policy makers including Special Parliamentary Advisor in the UK on Energy and Middle Eastern Issues, Commonwealth Secretariat, IMF and World Bank, as well as academic institutions and specialized think tanks on a global scale.

With these unparalleled width of experiences gained from working across the wide range of stakeholders, she is one of the global voices of energy.

Dr Nakhle who is also the founder and Chief Executive Officer of Crystol Energy, an advisory, research and training firm based in the UK, told African Eye Report in an interview that starting the company was not based on sudden inspiration or a specific business model to follow. It was rather based on experience, ambition and intuition.

“As soon as I completed my PhD, I got a job offer from the prestigious Wood Mackenzie. I had and still have a lot of respect and admiration for the company – especially that they shared with me one of their core financial models when I was doing my PhD and which gave me access to crucial data that was instrumental in completing my thesis”, she explained.

However, she did recall sitting on her bed, rocking back and forth wondering whether she should play it safe and accept the offer especially that her student visa was expiring and she hardly had any income.

“Still, I decided to turn it down. I didn’t want to play it safe and wanted to explore what was out there for me. Indeed, I explored various options including academia and industry (Eni and Statoil) as well as House of Lords in the UK.

She also worked with international organisations but as a consultant; she turned down two full time job offers from one of them.

It was not that Dr Nakhle did not enjoy what she was doing with those institutions, but she felt that there was still something she wanted to try now that she had a better understanding of market needs and gaps.

“Something that would make me feel deeply fulfilled, and that would give me the ability to work with a wide range of stakeholders as well as the constant luxury to select what I wanted to work on. I was also curious; I wanted to test my ability to run my own show”.

This is when Dr Nakhle decided to start Crystol Energy in 2012; she has absolutely no regrets.

She has succeeded because of her tenacity, curiosity and the determination to pursue her passion and what made her feel genuinely happy and fulfilled.

At first it was frustrating as she could not properly articulate what she exactly wanted – to the annoyance of her family and friends.

Dr Nakhle knew she wanted to do something different and challenging but she wasn’t sure what it was. She then accepted that she was sailing in a heavy fog and sooner or later she would see the other side of the lake. In this respect, it is not out of place to say that Dr Nakhkle is not scared of taking risks.

“The further I sailed, the better the vision became. But it took a while – it required patience and perseverance as well as the ability to go back on track after nasty experiences and sometimes unavoidable distractions”, she indicated.

In addition to personal attributes, Dr Nakhle has worked hard on equipping herself with extensive knowledge particularly as related to her area of work and on sharpening her analytical skills and technical abilities. This process she believes never ends.

Stands for many things

Dr Nakhle stands for many things – shaped by her upbringings during the civil war in Beirut, Lebanon, then her international experience. She is above all someone of utter common sense and balance, and that’s what she stands for in a world full of nonsense.

Dr Nakhle finds the energy world fascinatingly complex but also full of myths and half-truths which need to be constantly challenged and put right.

“I admit that my attraction to energy issues stems partly from my determination to show that what was traditionally a very masculine world can be illuminated, informed and guided just as much by women as by men.

And behind this may be my motivating wish to show that someone from a very different and difficult background can achieve high expertise and prominence and reputation in a completely different environment and culture”.

On a professional level, the affable Dr Nakhle finds the various activities she is involved in complementing and supporting her work as the CEO of Crystol Energy.

Take teaching for instance, she has been teaching for years and at different institutions and which she has no intention to give up.

Dr Nakhle has been involved in several life-changing initiatives which were introduced to support and empower women and the youth. Chief among them is Access for Women in Energy (AccessWIE) which she set up in 2007 with the aim to support the development of women in the energy sector globally.

“Throughout the years, we have organised many events that showcased female expertise in the energy sector and have partnered with other initiatives that share our values and principles around the world. We have also supported the development of similar initiatives in other countries” according to her.

More recently, and following the economic crisis that hit Lebanon, in addition to Covid-19, as well as the disastrous explosion at Beirut port in August 2020, she approached Lebanese Oil and Gas Initiative (LOGI), a local NGO to help Crystol Energy in offering regular internship to young graduates with interest in energy.

The idea according to Dr Nakhle was to enroll under each round one young man and one young woman for a couple of months and help them to improve their understanding of the global energy sector, further supporting their career progression.

From her perspective, “this was a small token of appreciation to Lebanese youth who are very talented yet struggling badly at these difficult times.

The idea proved to be very successful – not only we had 71 applicants in the first round, but we have also come across some brilliant minds and personalities”, she added.

Words of advice for young girls and women

“Whether you live in a rich or poorer country, be mindful that you will experience discrimination of some sort and at some stage of your life and career.

However, don’t let that distract you from pursuing your goals. I know this sounds like a cliché, but you have to persevere, believe in yourself and think strategically”.

Dr Nakhle knows how tough it can be for women, especially in certain cultures, when they want to pursue a career, particularly if it is perceived as unconventional, and at the same time have a family. But, from her personal experience, the two need not to be conflicting.

Her advice to young business leaders

There is the basic textbook advice such as aim high and be determined to reach your goals. Challenge yourself, be patient and embrace difficulties, she advised.

She urged them to stay true to their own values and follow their passion but remain agile in today’s fast moving environment.

“Then there is the all important people’s angle. You should also be a good listener and a good communicator. But above all I would say recognize the influence you will have on other people’s life and decisions, and use it wisely”.

Dr Carole Nakhle who was born and raised in Lebanon moved to the UK in 1998, originally for one year to pursue a Masters’ degree in Finance after obtaining a Bsc in Economics Science in Lebanon.

Then she got attracted to the field of energy economics and decided to enroll in a PhD programme in the UK.

In addition to her commercial role, she has lectured at various academic institutions including the Blavatnik School of Government at Oxford University, University of Surrey in the UK, and Saint Joseph University in Lebanon.

Her views are highly regarded with more than 200 articles in academic journals, newspapers and magazines to her credit.

Dr Nakhle is an ardent commentator on energy in the international media and at major conferences and industry gatherings, in many countries.

She has appeared on Asharq, Al Arabiyya, Al Jazeera, BBC, Bloomberg, CNBC, CNN, France 24 and Sky News, among others.

Dr Nakhle has authored two widely acclaimed books: Petroleum Taxation: Sharing the Wealth published in 2008 and re-printed in 2012 and used as primary reference in leading universities and industry training courses; and Out of the Energy Labyrinth (2007), co-authored with Lord David Howell, former Secretary of State for Energy in the UK.

Dr Nakhle has worked on projects in more than 50 countries, collaborating closely with host governments, parliaments and ministries, in addition to the private sector, think tanks and civil societies. She has also been on exploratory visits to the Arctic and North Sea.

In 2017, she gave evidence to the International Relations Committee at the UK Parliament on the transformation of power in the Middle East and implications for UK policy.

Dr Nakhle has played an integral part of the OECD Policy Dialogue on Natural Resource-based Development and has contributed to the development of the organization’s Principles for Durable Extractive Contracts.

She is an active member on the Governing Board of the Natural Resource Governance Institute and Member of its Audit and Finance Committee.

Additionally, Dr Nakhle is a Senior Fellow at the Lebanese Centre for Policy Studies and lead Expert with the Geopolitical Intelligence Services.

She loves dancing. She recalled that her mother enrolled her in ballet classes at a very young age as she noticed how she would move at the slightest beat. When she first requested a National Insurance Number in the UK, it was for a part time job as a belly dancing teacher.

Dr Nakhle also loves swimming, writing and traveling. She has been to many places around the world but her most memorable trip was to the Arctic where she reached 84 degrees north on board of a Norwegian ice breaker. The serenity and sheer simple yet majestic beauty of that place is simply magical. 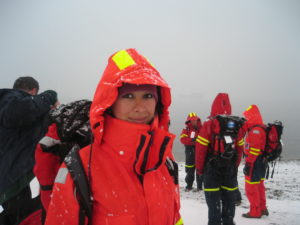 Dr Carole Nakhle on an exploratory trip to the Arctic 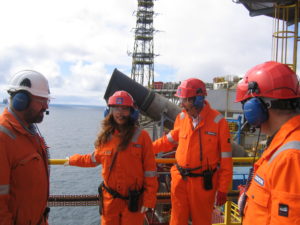 She also has close affinity to Africa where she has traveled extensively. Her first trip to the continent was to Sierra Leone on an IMF mission more than 10 years ago.

The first thing that caught her eye as she arrived to Freetown port was a flying Lebanese flag. But that was not the only thing that captured her attention; throughout her two weeks stay, she couldn’t help but noticing how grateful and kind people were despite their dire economic conditions. The sight of a poorly dressed child running under the rain got stuck in her memory. She can still hear his laughter.