Accra, Ghana//-We all love chocolates – when we can get them. According to industry statistics more than 17 million metric tons or 350 million bars of diary milk chocolate, that is about one million every day, are sold every year.

In the world’s most chocoholic countries, citizens consume about nine kilos of chocolate per person every year. Despite the popularity of the sweet cocoa product, the industry is laden with problems are that are not well known to consumers.

One of the most visible campaigns against child labour over the past 20 years has centred on the exploitation of children in cocoa farming.

In 2001, the International Labour Organisation, ILO, through its International Programme for the Elimination of Child Labour secured the agreement of chocolate manufacturers and cocoa farmers to eliminate child labour from the industry.

As it happens, The UN General Assembly has declared 2021 as the Year for the Elimination of Child Labour and once again, the spotlight has intensified on exploitation of children in the cocoa industry.

According to a 2013-14 survey conducted by Tulane University, an estimated 1.4 million children aged 5 years old to 11 years old worked in agriculture in cocoa-growing areas, while approximately 800,000 of them were engaged in hazardous work, including working with sharp tools and agricultural chemicals and carrying heavy loads.

The year 2025 has been set as the target for the elimination of child labour completely, but even the most optimistic perspective must be tinged with more than a hint of fear that the target may not be realized.

One reason for the skepticism is that the campaign, while completely worthwhile does not take the full view of the cocoa industry into account.

Chocolate and all cocoa products start with the cocoa farmer who typically lives in a village in West Africa. In an article titled Cocoa has a poverty problem published five years ago by the Counter Magazine succinctly captures the plight of most cocoa farmers in Ghana and the Ivory Coast.

The paper reported that “a joint study conducted by the French Development Agency and Barry Callebaut (the world’s largest cocoa producer) based on surveys conducted in Ivory Coast, found that farmers earned an estimated 568 West African Franc, or $1 per day”.

It has to be understood that the price of cocoa is set by the buyer and not the farmers. In Ghana, the Cocoa Marketing Board or Cocobod as it is known now, used to be a price broker for cocoa farmers but their leveraging power has been whittled down since the days of structural adjustment and the introduction of market forces.

In an Interview with Mr. Tetteh Homerku, who is the head of the Political Economy Unit at Third World Network – Africa, he explained that cocoa farmers have faced hard time since the with withdrawal of subsidies and other kinds of state support.

“Coupled with price volatility, income disparity across the value chain remains a persistent challenge in the sector. For instance, despite supplying the key ingredient of chocolate bars, cocoa farmers in Cote d’ Ivoire and Ghana earn only 3 to 6 per cent of the chocolate bars’ retail market value”.

Yes, the global chocolate market size was valued at USD 130.56 billion in 2019 and is expected to grow at a compound annual growth rate (CAGR) of 4.6% from 2020 to 2027. Only a minuscule fraction of this vast amount goes to the farmer whose farm gate price has dropped considerably since 2016.

So, any discussion of child labour in cocoa farmer must begin with the living conditions of the primary producers – the farmers.

Everyone agrees that children must not be used in hard work, especially when it deprives them of their educational opportunities. However, we have to differentiate between apprenticeship in cocoa farming and illegal child labour.

In Ghana, traditionally children in cocoa farming areas are introduced early to farming by accompanying adults to their farms. Without any specialist training centres or schemes for training young farmers, this system of informal apprenticeship is the only guarantee of any future for cocoa farming. 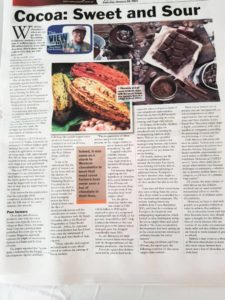 This article was originally published in the Mirror, a newspaper of the Graphic Communications Group

To improve farmers’ incomes, they ought to earn much more from the end use of their product but this is not the case. Once they sell their cocoa beans the earn nothing from the cocoa value chain which is controlled by a few multinational companies.

The website readingvisions.org published the Cocoa Barometer 2015, published by a coalition of European development and campaigning organisations, which looked at value distribution within the cocoa supply chain and asked whether “the many sustainability developments that have sprung up in the cocoa sector are resulting in sufficient income for cocoa farmers”.

Focusing on Ghana and Cote d’Ivoire, the report gave the following overview of the cocoa supply chain context:

Most cocoa farmers live in poverty and are ‘unorganised’, i.e. not in co-operatives or other organisations that can represent them and their interests.

It also found that “the cocoa supply chain is highly consolidated, with just a handful of companies controlling the processing of cocoa and the manufacturing of chocolate”.

Child labour is abhorrent and must be ended. Nations and society must work together to achieve that objective because the practice denies equitable opportunities and social justice to children in those conditions.

However, as UNICEF puts it, “most often, child labour occurs when families face financial challenges or uncertainty – whether due to poverty, sudden illness of a caregiver, or job loss of a primary wage earner”.

Of course, the main victims of child labour are the children involved and we need concerted international effort to end the exploitation of all children under all conditions.

However, we have to deal with poverty as a general condition in order to achieve that ambition. So, as chocolate lovers tuck into their favourite sweet, they should spare a thought for the difficult lives of cocoa farmers who are victims of an unfair international trade order and the children who are forced to work instead of going to school. Indeed, it may come as a shock to Western chocoholics to learn that MOST cocoa farmers have never SEEN a bar of chocolate in their lives.