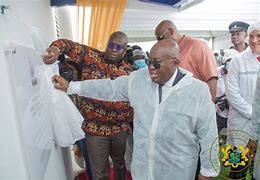 The GHS175 million (US$22 million) plant would produce infant cereal products for millions of children in Ghana and the West and Central Africa region.

Speaking at the commissioning ceremony, Mr Akufo-Addo says the new plant would increase Nestle Ghana’s production capacity by over 6900 metric tonnes and describes the commissioning of the new expanded plant as “timely investment”.

He notes that Nestle’s quick evolution in Ghana demonstrates the commitment of the company to the socio-economic growth and development of the country.

The President adds that the successes of Nestle in the country should motivate other companies to aspire to the heights of developing global brands and pledges his government support in that direction.

Since 2017, Mr Akufo-Addo says his government has taken bold and pragmatic steps to refocus the investment priorities of the country and mobilized the needed resources for the growth of priority sectors of the Ghanaian economy.

This he explains is “because we are determined to transform Ghana from being a mere producer and exporter of raw materials to a value-added industrialized economy which would provide opportunities, jobs and prosperity for all especially the youth of our country”.

Mr Akufo-Addo once again admits that the Russia’s invasion of Ukraine and the combined effect of the COVID-19 pandemic crisis are badly hitting the country’s economy but such investment by Nestle is a clear signal of confidence of the international business community in the country’s economy.

He uses the occasion to call on manufacturing and other businesses in the country to take advantage of the access to expanded markets created by the Continental Free Trade Area (AfCFTA) to grow their businesses.

In his own words: “West Africa’s population of some 350 million people and adoption of the ECOWAS Trade Liberalization Scheme (ETLS) to create a regional market have been re-forced by the establishment of the African Continental Free Trade Area whose secretariat is located in Accra and it represents a market of some 1.3 billion with combined GDP of 3 trillion United States dollars.

These regional and continental markets provide considerable opportunities for value-added products manufactured by entrepreneurs in Ghana”.

He continues: “I am delighted that Nestle has taken an active interest in the operationalization of the AfCFTA which will be seen as the game-changer to help reposition the private sector operators in Ghana to take full advantage of the market opportunities under the AfCFTA”.

On his part, the Minister of Trade and Industry, Alan Kyerematen adds that Nestle has become an icon in the country’s manufacturing industry, applauding that the commissioning of the expanded cereals plant is therefore a feather in the cap of Nestle.

He urges the players of the private sector to follow the shining example of Nestle Ghana to take advantage of the government’s initiatives particularly the One District, One Factory programme to grow their businesses.

The Chief Executive Officer of Nestle Central and West Africa, Mauricio Alarcon states the newly opened plant would increase the local production of the company’s cerelac  brand which is dominant in the markets for children in Ghana and the rest of West and Central Africa by 13,700 metric tonnes yearly.

While the Chief Executive Officer of Nestle Ghana, Georgios Badaro assures that Nestle which has been operating in Ghana since 1957, would continue to diligently contribute to the economy of Ghana.

He adds that with the commissioning of the expanded plant the company has created additional income generating opportunities for local farmers and suppliers in the country.