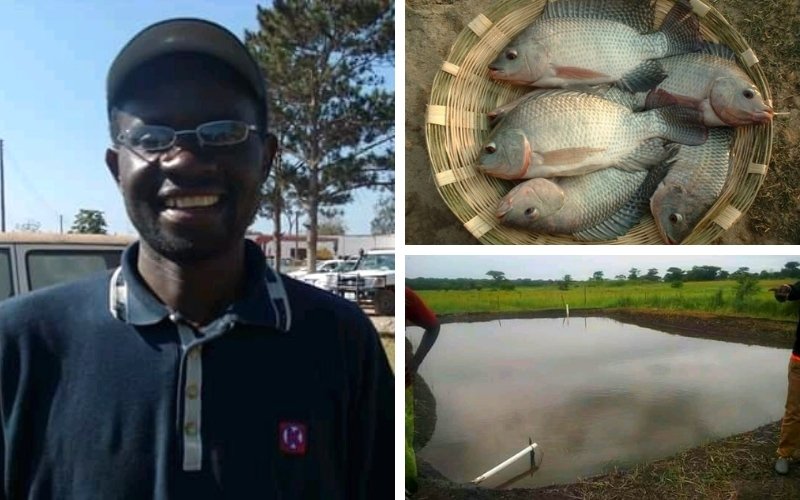 Allan Mbale is the founder and CEO of Vyazala Crops, a Zambian company that has been operating since 2014. Vyazala works with smallholder farmers to raise fish and chickens as well as cultivate certain crops, which the company then sells to its clients.

Mbale worked for a large donor-funded agriculture project for 11 years when his father approached him to join the family business.

His father had a successful construction company, Vyazala, and wanted his son to become his business partner. Mbale, however, preferred working in the agriculture value chain and convinced his father to change Vyazala into an agriculture operation in Zambia’s North-Western Province.

“We started with tobacco. We would demonstrate how the crop was grown on our farm near Solwezi in Zambia, inviting smallholder farmers (outgrowers) to observe and then we would ask them to become suppliers,” he says.

When tobacco didn’t achieve immediate success because of a lack of buyers, Vyazala tried sunflowers but the market remained difficult.

The mineral-rich North-Western Province has one thing in abundance: mines with large canteens that require a constant supply of fresh produce to feed their employees.

One mine approached Mbale to see if his network of farmers could supply fresh vegetables. With a foot in the door, he could talk to the mine’s procurement department to understand what they needed from the local agricultural producers. The main request was for tilapia fish.

“There is very high demand here. I would say the production of all the fish farmers in Zambia can contribute only about 20% of total demand. Just that one mine wanted 10 tonnes of fish every month.”

Mbale jumped at the opportunity and started researching what had to be done to set up an aquaculture project.

Using available finances, he was able to establish a few fish ponds but understood that to meet the existing demand, even just for the one corporate customer, Vyazala would need to scale quickly.

In 2015, Mbale spotted an opportunity through a joint project from the UN’s Food and Agriculture Organisation (FAO) and the International Labour Organisation (ILO), called Yapasa. The project focused on aquaculture and soya bean value chains in Zambia and the company was successful in its application, receiving a grant of approximately $68,500.

Through the Yapasa project, Vyazala provided training as well as input materials to small-scale fish farmers in the area. Inputs included the in- and outflow pipes for the ponds, the fingerlings – juvenile fish about 10 to 15 cm in length – and the feed.

“When necessary, we even provided shovels and wheelbarrows to some of the farmers. For each pond of about 15-20 m2 with a fingerling capacity of 2,000, the input cost is roughly 7,000 Zambian kwacha ($440),” explains Mbale.

“The criteria we use for those who want to participate mainly has to do with the availability of water bodies,” he says. “We also look at their proximity to other farmers as we put them into clusters of about 20 to make the management easier.”

The cost of loans or inputs provided are subtracted from the income generated once the fish are ready.

Vyazala currently works with 100 farmers, who typically each have one fish pond. On average, one pond produces 400 kg of fish per cycle. There are two cycles in a year.

The need for value addition

The original mine did not require the fish to be processed. However, that first supply contract expired and upon renewal, the requirement was to provide gutted, scaled and chilled fish. Mbale and his team realised that for long-term growth, a processing plant would be essential.

The company was selected as a Private Enterprise Programme Zambia (PEPZ) and Zambia Business Growth Fund grantee and received 50% co-funding to build the plant and buy a refrigerated vehicle. This amounted to 650,000 Zambian kwacha ($40,500).

“The plant is completed, equipment bought and installed, but it is not yet commissioned. The biggest challenge is power. We originally wanted to go solar but could not secure the funding. We still have to facilitate power provision.”

Vyazala kept the bigger picture in mind and set up a facility that could process more than just fish. “We have a chicken line and a fish line and even a compartment for sunflower oil processing,” he says. “Then we also have storage facilities and cold rooms.”

According to Mbale, the company will always look to adapt, depending on market demand. When the mine wanted fish, it set up an outgrower scheme for fish farming.

When the same mine said it could use around 16 tonnes of chicken per month, Vyazala diversified into chicken rearing on its farm and has added three other farmers as suppliers. It also still buys sunflower seeds from smallholder farmers.

Vyazala uses the sunflower cake – a by-product from sunflower seed processing – as feed for the fish and chicken.

“If I look back, there is one thing I would change,” says Mbale. “I would set up a livestock feed plant early to provide feed to our outgrowers.”