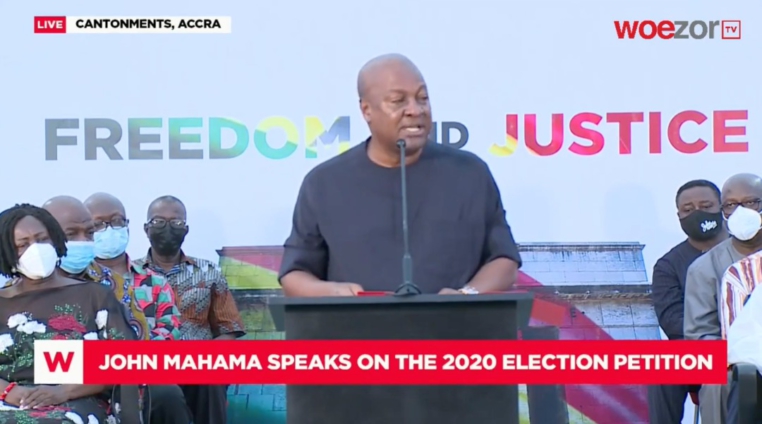 The Communications Director for Young Democrats in the Sissala East Constituency in the Upper West Region of Ghana, Prince Justice Ali has stated emphatically that the recent “do or die” declaration by John Dramani Mahama, the Flagbearer of the 2020 National Democratic Congress (NDC) is a must-do.

According to him, they do fully understand the meaning of the English idiom; “Do or Die”; hence, their full declaration of support for it and for the leadership of the former President.

“Those who understand the word, “review” to mean “cancel” will surely have difficulty in understanding what “Do or Die” means”, Mr Ali took a swipe at the governing New Patriotic Party (NPP) members.

“As far as the good people of Ghana are concerned, “Do or Die” is a good call in the right direction”.

Vigilance is the key

The Youth Democrats said they were deeply convinced that the Akufo-Addo/Bawumia government lost the 2020 elections and had no business being here but for the aid of the partisan arbiters at the polls and its adjudication process.

Under these circumstances, they welcomed the “Do or Die” as a subtle declaration of lack of confidence in the judicial system as a true arbiter and guarantor of fairness and justice. The court processes, the demeanour of the Justices during and after the ruling, are all a matter of public knowledge for them all to ponder over.

“We will rather settle matter at the polling stations than seek the aid of the Supreme Court in the next general elections. We are poised to act to liberate this country.

With vigilance and determination, the Young Democrats see victory of 2024 at hand. NPP know this for sure and that’s the reason that they have become jittery. The fear of being prosecuted is becoming real and creating consternations”.

These are the reasons for all heightened attacks and mudslinging on Mr Mahama. They wanted to assure Mr Mahama that, NPP would never be allowed to select their candidate for them. It is an infantile strategy that they have engaged in, and an exercise in futility, he stressed.

The good people of Ghana are gingerly waiting to usher in Mr Mahama to come and continue with his good works of building the nation.

This government has shown that it is incapable of doing the work. We have become worse off since 2017, Mr noted.

Touching on the four years of the Nana Addo/Bawumia government and the events of the last general elections, he said these had thought the good people of Ghana some bitter lessons.

Mr Ali said: “Never again should the people of Ghana allow this organised-crime entity to impose and lord itself over us with impunity. It has been five years of despotic rule, unbridled lawlessness, vindictiveness, broad daylight robbery, executive opulence and obscene nepotism”.

It takes a very determined people to uproot such a fascist regime that is determined to perpetuate its stay in power with the hope of continuing to cover up its own rot/theft, he fired.

“As we thank JDM for injecting this spirit of nationalism into us in his “thank you tour”, we are equally reaching out to the good people in NPP who are offended by the level of obscene thievery and clear disrespect for the rule of law to show their abhorrence by rejecting any subtle coercion or attempt by this corrupt government to buy off their conscience at the last minutes of 2024 to perpetuate another variant of the Nana Addo/Bawumia evil virus”.

In the upcoming elections of 2024, vigilance shall be the key, and vigilante, we shall be’.

The Young Democrats of NDC therefore wished to reassure the 2020 presidential candidate of the NDC, Mr Mahama that they are solidly behind him and his candidature for the 2024 elections.

“We shall not allow the mandate of the people to be stolen again”.

The impeccable record of Mr Mahama stands tall for the world to see. Ghana’s development was progressing steadily and healthily until Nana and Bawumia invented their tricks and concocted pure lies to deceive Ghanaians for their mandate, Mr Ali touted.

Development has since stagnated. Key roads in the Sissala land were under valid contracts and works were progressing steadily until this evil hearted government came in to halt all works.

“We cannot forgive NPP for putting us through this hell for five years now. The fact that they have not been able to find anything wrong with the contracts simply vindicates our point that the Nana Addo/Bawumia led NPP rode on the back of lies and deception and came to inflict wickedness on the the Sissala people. There was absolutely no justification for stopping the road constructions in the first place”.

On the contrary, what they have seen flourish in this regime is corruption. The Planting for Food and Jobs (PFJ) programme has become a conduit for the party supporters of NPP to loot taxpayers.

No subsidised fertilizers for farmers

For this farming season, farmers in the Sissala Land never saw the so-called subsidised fertilizers. They bought all their fertilizers at the commercial rates from the open market. Even then, they struggled and went through hell to find the products, Mr Ali stated.

“The unfortunate ones amongst us could not even apply fertilizers to our crops. Yet, government is claiming that some consignments of fertilizers were shipped into our land.

It is the same with the seeds. It is a monumental scandal of thievery that must be investigated. This government is deliberately asleep and unwilling to fight corruption”.

One Village, One Dam

The so-called One Village, One Dam (1V1D) is a fluke. “We were promised dams (irrigation scheme) in each village. As we talk, there is no single village in the Sissala East Constituency with a dam constructed by the Akufo-Addo/Bawumia government that is capable of delivering dry season farming. It was just a pure lie”.

For the One District, One Factory (1D1F), Mr Ali lamented that they were still looking for the foundations, if any of a factory under their 1D1F in the constituency.

Massive borrowing with nothing to show

Nana Addo and Bawumia, who lied to Ghanaians that they didn’t need to borrow to develop the country, have since borrowed over GH¢200 billion. What do they have to show us in this constituency? He questioned.

Mr Ali observed: “Prices of goods and services are skyrocketing creating general hardships. Our earnings have literally lost value. The hardship is real. The cedi has collapsed and petroleum prices are on a daily increase”.

Our dream of building our own houses is getting dashed as building materials have become unaffordable”.

With the continuous presence of the family and friends of Nana Akufo-Addo as the chair and commissioners of the Electoral Commission (EC) cannot be relied upon to do a professional job.