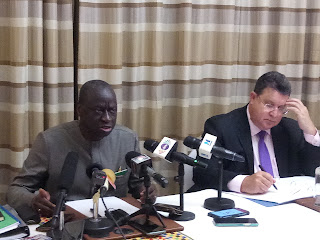 Accra, Ghana//-The World Bank Vice President for Western and Central Africa, Ousmane Diagana, has announced that the bank would double its current education portfolio of $3.1 billion to $6.2 by 2025.

According to him, this would enable the bank to help address the challenges confronting education in the 22 countries which make up the Western and Central Africa region.

Mr Diagana disclosed this in Accra at the closing press briefing of the bank’s new regional education strategy “From School to Jobs: A Journey for the Young People of Western and Central Africa” meeting.

He noted: “We are in a time of crises: learning crisis, health crisis, and economic crisis. But this is an opportunity for us to turn these crises into good things”.

Touching on the landmark World Bank Africa Western and Central Education Strategy 2022-2025, Mr Diagana assured that the bank and the minister of education and finance and the other stakeholders would work assiduously to ensure that the strategy is implemented.

“We will put in place systems to monitor and evaluate progress of the implementation of the strategy”, he emphasized.

On his part, Ghana’s Minister of Education, Dr Yaw Osei Adutwum, added that the strategy when implemented would transform the region’s education sector.

Earlier opening the ministerial meeting on education for Western and Central Africa, Ghana’s Vice President, Dr Mahamudu Bawumia, said like many countries, Ghana is dealing with the issue of learning poverty and the consequences of the COVID-19 pandemic.

That is why he is happy about the focus on the strategic themes of the conference namely: finance and governance tackling learning poverty and foundational skills technical vocational education and training, and tertiary education and skills.

He noted: “We will not be able to deliver change without building and sustaining political momentum in the region.

In many of the region’s countries, more efforts are needed to rationalize the governance of education systems to achieve greater coherence, cooperation, and coordination”.

So he believes in the conclusions of the Education Commission: that education unlocks not only individual opportunities, but also unlocks gender equality, better health, better qualities of life and a better environment.

That infant and maternal mortality can be twice as high among uneducated women compared to those who are educated remains a compelling fact, he noted.

Africa is a young continent and getting younger by the year. According to the United Nations, half of Africa’s population is under the age of 25 and the continent will be home to about 25 percent of the entire world’s working-age population by 2050.

Across the continent, the Central and Western African sub-region has the highest growth in population of young people. Between 2000 and 2020, the under-25 population increased by 82 percent and 68 percent respectively; compared to 18 percent in Northern Africa.

Classical economics reveals that the balance between factor endowments — land, labour and capital— is critical to realising comparative advantage. Thus, this demographic development could be a huge asset for achieving the Africa We Want and the UN’s Sustainable Development Goals.

However, this tremendous asset will only become the ‘demographic dividend’ if our countries and regions invest in the education of all our young people, according Mr Ofori-Atta.