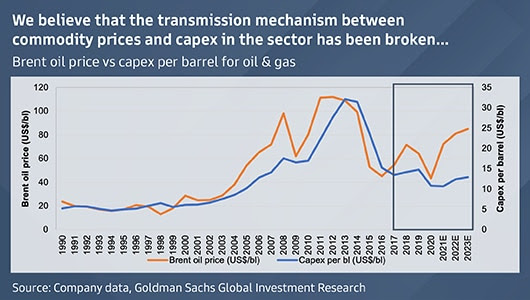 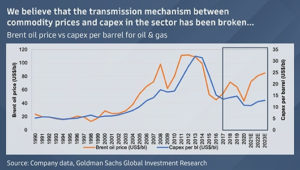 Even as oil prices climb higher, the flow of money into new oil and gas projects has stalled as investors increasingly avoid industries that produce fossil fuels and heavy carbon emissions.

That breakdown between energy prices and capital expenditures is likely to prop up the cost of a barrel of oil, but it could also help support the transition to low-carbon energy.

We spoke with Michele Della Vigna, head of natural resources research in EMEA at Goldman Sachs, to discuss the firm’s outlook for commodity prices as investors increase their focus on climate change.

Your research shows that the link between higher energy prices and capital expenditures has broken down. What severed that connection?

Michele Della Vigna: The capital markets engagement on climate change has reached very high levels. We can measure it in many ways, like climate change shareholder resolutions where the approval rate went from 10% to 40% during the past 10 years.

Because of this shift, the industry finds itself severely capital constrained on traditional hydrocarbon investment in different ways. For smaller exploration and production companies it’s about getting financing.

For larger integrated oil and gas companies it’s about decarbonizing. But either way, none of these companies can scale oil and gas projects the way they used to. And if you think that most companies effectively are forced to embrace a carbon budget, a carbon budget ultimately leads to less oil and gas development, leads to higher hurdle rates, or cost of capital for these projects, and automatically means that whatever the cash flow available may be, capital expenditures are restrained.

This severe restraint on capex in oil and gas is what breaks that historical relationship and even in a tight oil and gas market, prevents the creation of new oil and gas fields.

That prolongs the up-cycle and brings what we call the “revenge of the old carbon economy” because this creates supply tightness and ultimately generates what could be one of the most interesting commodity up-cycles we’ve seen in decades.

Higher oil prices are absolutely consistent with a push for decarbonization that comes from the capital markets.

At the GS Global Strategy Conference, your colleague Jeff Currie said investors are also influenced by the recent history of investment losses in energy. Is that another reason capital isn’t going into this sector?

Michele Della Vigna: It’s a very reasonable comment. But interestingly, if you look back to previous recoveries, you used to see a doubling of capex within two or three years. This time around, we think capex in two or three years will barely go up in oil and gas by 20%. So something is not just cyclically but is structurally different here.

Now, there will be other avenues of capex. If you included low-carbon investments, you would see a bit more capex recovery because there is a shift to low carbon but still nothing like the capex increases we’ve seen in previous up-cycles.

Is this a global issue? Does it break down differently depending on the geography?

Michele Della Vigna: There are geographical differences, but bear in mind, capital markets are global. The push is stronger in Europe, but it is also felt in the U.S. and in other regions.

So although it’s true to say that the European energy companies are probably more carbon constrained, so are the U.S. companies where the focus on oil growth is minimal even at an oil price that historically would have led to much more activity.

Even the national oil companies are focusing much less on oil growth and much more on the development of low-carbon businesses. So I think this is a global process. It has some regional bias, but it’s a global process.

To learn how the decline in capex affects buybacks, dividends and the energy transition, read the full interview here.