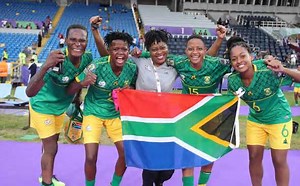 This year’s Women’s Africa Cup of Nations has been a spectacle of great football from the 12 countries that have competed in this year’s tournament.

11 countries travelled to host nation Morocco for the WAFCON 2022 which started on the second of July.

The competition placed the 12 countries into three groups of four teams each. Nigeria was the last winner of the WAFCON back in 2018 when Ghana hosted the tournament.

The competition has been dominated and has only been won by two countries since its inception in 1998 with Nigeria having lifted the trophy 11 times and Equatorial Guinea twice.

The betway tanzania app download is compatible with IOS or Android devices and lets you can the fixtures and odds on all of the remaining matches of the WAFCON.

This Monday saw the semi finals of the 2022 WAFCON taking place and we now know which teams will be playing in the final.

Banyana Banyana made it through to the final after beating Zambia in their semi final clash. It was a close game with the winning and only goal of the match taking place in the dying moments of overtime.

The winning goal came from Linda Motlhola through a penalty goal in the 94th minute and was enough to secure the South African team their spot in the final. The other semi final match was between Nigeria and host nation Morocco.

The match ended one all after full time which meant the match had to go into penalties.  Morocco went on to win the match deservingly through penalties with the final score of after penalties ending at 5-4.

There is now only two matches remaining in the 2022 WAFCON with the match for third spot between Nigeria and Zambia taking place on Friday night at 22:00 at the Stade Mohammed V in Casablanca.

Morocco and South Africa will have had a few days rest and preparation time for the final match. The winner of the match will be the third trophy holder of this competition.

The match will take place at Prince Moulay Abdellah Stadium on Saturday the 23rd at when the match kicks off at 22:00. The odds for the winner of the final are very close with the odds sitting at 2.70 for Morocco to win and 2.30 for South Africa to win. Both teams go into the final without having lost a match in the tournament.