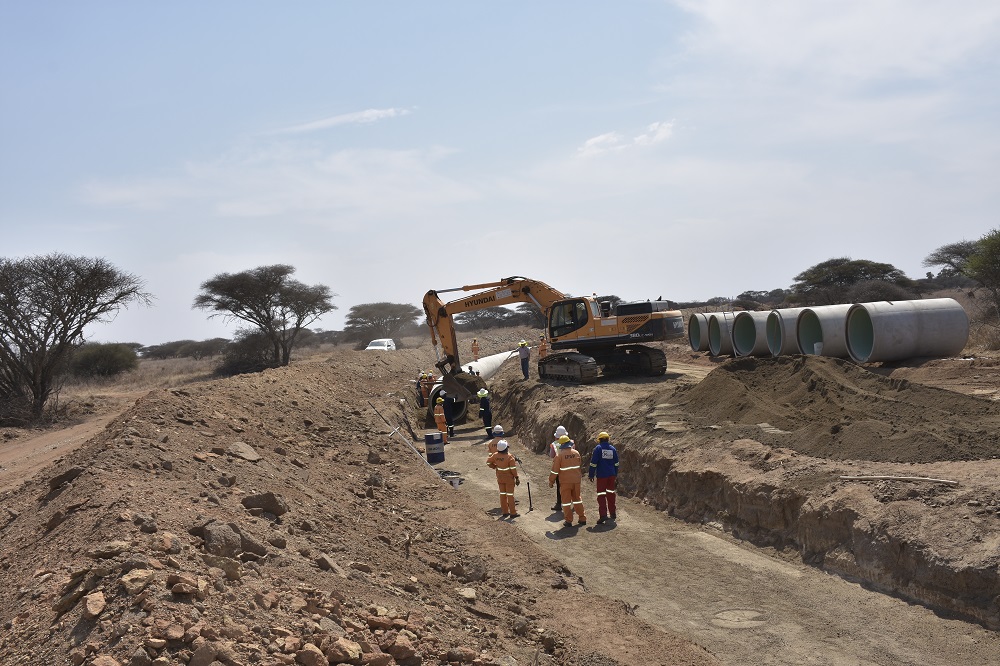 The United Nations (https://bit.ly/3sZ0Mz5) warned that the world could face a 40 per cent shortfall in water supply by 2030, with Africa – which already suffers from greater levels of water stress than other regions – likely to bear the brunt.
The economic impact of the shortfall in water infrastructure and supply is already severe. Sub-Saharan Africa currently loses an estimated (https://bit.ly/30kvxlS) 5 per cent of its annual gross domestic product (GDP) due to poor access to clean drinking water and sanitation, 5 to 25 per cent of its GDP to droughts and floods in affected countries, and 40 billion hours of otherwise productive time annually, collecting water.

Having delivered on sustainable water supply projects in the SADC region, South African-based construction and engineering firm, Khato Civils, has announced its intention to expand across the continent and play its part in tackling Africa’s infrastructure shortfall.

The African Continental Free Trade Agreement (AfCFTA), the world’s largest free trade area, came into effect in January 2021. It is expected (https://bit.ly/3sZwgp0) to increase levels of intra-Africa trade by over 50 per cent by 2030 and offers the opportunity for increased Pan-African collaboration in major infrastructure projects.

“Problems like food shortages are not occasioned by a lack of food on the continent necessarily, it’s about our underdeveloped land and waterways. If we can step up infrastructure development, we will solve a lot of other problems as well,” says Mr Phiri.

“AfCFTA gives us a chance to have a business without borders.

“We will now be able to go into places like Zimbabwe, Zambia and other countries to compete. It also gives us a chance to compete with multinationals from India and China in other African countries. The agreement will lay to rest some of the restrictions that were imposed by colonial legacies of the past.”

As the world becomes more populous, increased urbanisation, climate change and changes in food production are driving water demand at a rate that outpaces supply.

Globally, 80 (https://bit.ly/30lOVz5) per cent of wastewater goes back into the ecosystem without adequate treatment, resulting in 1.8 billion people worldwide drinking contaminated water.

Over 300 million people in Sub-Saharan Africa lack access to clean drinking water and over 700 million live without access to good sanitation.

The world faces a severe water shortage by 2030, and Africa is likely to bear the brunt – as exacerbated by the impact of climate change.

Africa’s water sector has an annual investment shortfall of USD 13 billion (urban areas) to USD 27 billion (rural areas), while African countries lose between 5 and 25 per cent of GDP due to issues related to lack of water infrastructure.

The Opportunity: Every $1 USD spent brings between 3 and 24 USD of economic benefits

For every USD 1 invested in water and sanitation, there are direct and indirect economic returns to individuals and households, the health sector, and agricultural and industrial sectors, ranging from USD 3 to 34, according to (https://bit.ly/30kvHcY) the World Health Organisation.

“If you look at big cities like Accra, their biggest issue is water and sanitation,” says Mr Phiri, “The same applies to other cities like Lagos and Kinshasa with power and roads coming a close second”.

“Water and sanitation is without a doubt the main area that will boom in Africa in the short-term future.”
In order to unleash these economic benefits, Khato Civils Chief Executive Officer Mongezi Mnyani called on governments to accelerate infrastructure development and foster public-private partnerships. “Political will is at the centre of it all,”  Mr Mnyani, said.

“Infrastructure initiatives must be government-driven because that’s where the agenda is set and major decisions are made. Governments must work collaboratively and also develop strategies that entice the private sector so that firms like ours have an easier time carrying out projects.”

Derisking Africa in the eyes of global capital is key to closing that funding gap. Mr Phiri believes indigenous African construction and engineering firms – previously often overlooked in favour of international firms – have a role to play in building investor confidence, saying “I believe it’s all about getting projects done on time, within budget, and with proper quality.

“People will trust you more if you have a track record of delivering what’s needed with allocated funds.

“Risk comes in when we have companies that do not do what’s required of them with borrowed funds. Once we develop professional and social proof based on the work done with borrowed funds, it will boost our credit rating and make it easier for us to access more capital.”

Khato Civils has been making a mark on water infrastructure across the Southern African Development Community (SADC) region for decades, with Mr Phiri at the helm for about 11 years.

“We took over the company in 2010 because we saw a niche area in South Africa,” he said. “Lots of South African companies were either being priced out of deals or running out of budget to complete certain projects. We also wanted to bring a special quality to the market in a way that exceeds what customers want and need.”

Also speaking in an interview with AfricaLive.net (https://bit.ly/3sW3g1l), CEO Mogezi Mnyani added: “We may be based in Johannesburg, but we have offices in Zimbabwe, Botswana, Ghana and South Sudan.

We are looking to set up offices in other regions as well because our vision is to diversify into other markets and offer our products to countries that need them the most across the continent.”

With Khato Civils’ ongoing expansion and 85 per cent of their staff based in local sites, the company is poised to expand Sub-Saharan Africa’s water infrastructure and supply, thus improving climate resilience and mitigating food security risks, pending greater investments in water infrastructure. “It’s not just about business for us, we work to ensure we leave a legacy by changing the lives of communities,” Mr Mnyani, said.

The government of Botswana is implementing the North-South Carrier Project to address water shortages in its growing capital, Gaborone.

The Khato Civils/South Zambezi/Evolution Engineering JV (https://bit.ly/3qlqpsk) is designing and constructing a Transmission Water Pipeline of approximately 100km from Masama Well fields to Mmamashia Water Treatment Plant in Gaborone, to convey 64Ml/day of borehole water abstracted from both Masama East and West Wellfields.

The project started in May 2020 and Khato Civils is rallying to complete what would normally require 2.5 years in half the time, as per the client’s wishes, and despite the COVID-19 pandemic.

In connection with the above-mentioned North-South Carrier Project in Botswana, Khato Civils is working in a joint venture with South Zambezi (https://bit.ly/3ehjnlR) to increase the capacity of the Mmamashia Water Treatment Plant to handle increased water pipeline flows.

The project entails designing, building and equipping all protection for the water treatment plant to function effectively, critically examining the maximum water flows and associated pressures, design calculations and drawings, amongst other activities (https://bit.ly/3v55Fso) The plant will treat a maximum of 110 megalitres of raw water per day.

Khato Civils and South Zambezi have a long-standing business relationship. This joint venture serves as a clear example of the type of collaboration African engineering firms can form to deliver infrastructure projects ahead of schedule.

The Lake Malawi project was conceptualised as a long-term and sustainable intervention to water problems that have been affecting the ever-growing population of Malawi’s capital city, Lilongwe, for over a decade.

Khato Civils is in a joint venture partnership with South Zambezi (https://bit.ly/3sROZmi) to extract water from Lake Malawi, clean and transport it to the Lilongwe Water Station, 124km away, before piping it to the city’s population. Khato Civils’ designs have been approved by the Malawi Water Board and the national government.

Shaping Africa’s Future With A Commitment to Green Building

The Khato Civils leadership also emphasises a commitment to sustainable engineering, construction and infrastructure development. “Our designs always have an element of green building in terms of energy savings, alternative sources of energy and local materials. We also research and look to bring in green technologies so that we ensure sustainability even as we build,” Mr Mnyani., said.

Mr Phiri added: “I believe our future in this industry, in relation to sustainability, will largely depend on solar energy. We want to be recognised in this space and we are moving ahead with sealing important partnerships with Canadian firms to get the right competencies. We see this as an emerging sector.”

Another of Khato Civils’ key service offerings is advice on cost-effectively executing projects from the design stage. “The importance of preliminary work before the execution stage is very important,”  Mr Mnyani said.

“We are resourceful enough and open enough for the use of various energy forms along the course of work. We have incorporated hydropower and even solar power, in the design, to ensure continuity at all times. We also believe in preserving natural sites, indigenous trees, graves and other important landmarks of countries.”

A Call For Transformative Partnerships

Khato Civils is now looking to both inspire a new generation of African engineers while accelerating its own development by forming new strategic partnerships.

“Another big plus of the AfCFTA agreement is that fellow Africans will see an African-owned company like us that is well organised and accomplished and our success will rub off on them. Overall, the trade agreement provides a platform where trailblazing African companies can set the marker for the rest to emulate,” Mr Phiri indicated.

“We look for competent like-minded partners and have found some in Kenya, USA, Italy, and other countries. The companies we work with have done business in far-flung areas, including Asia, and understand how to operate in sometimes unfavourable conditions.”

“We are open to partners that have a passion for changing the status quo, care about African development, and are not just interested in profitability.”