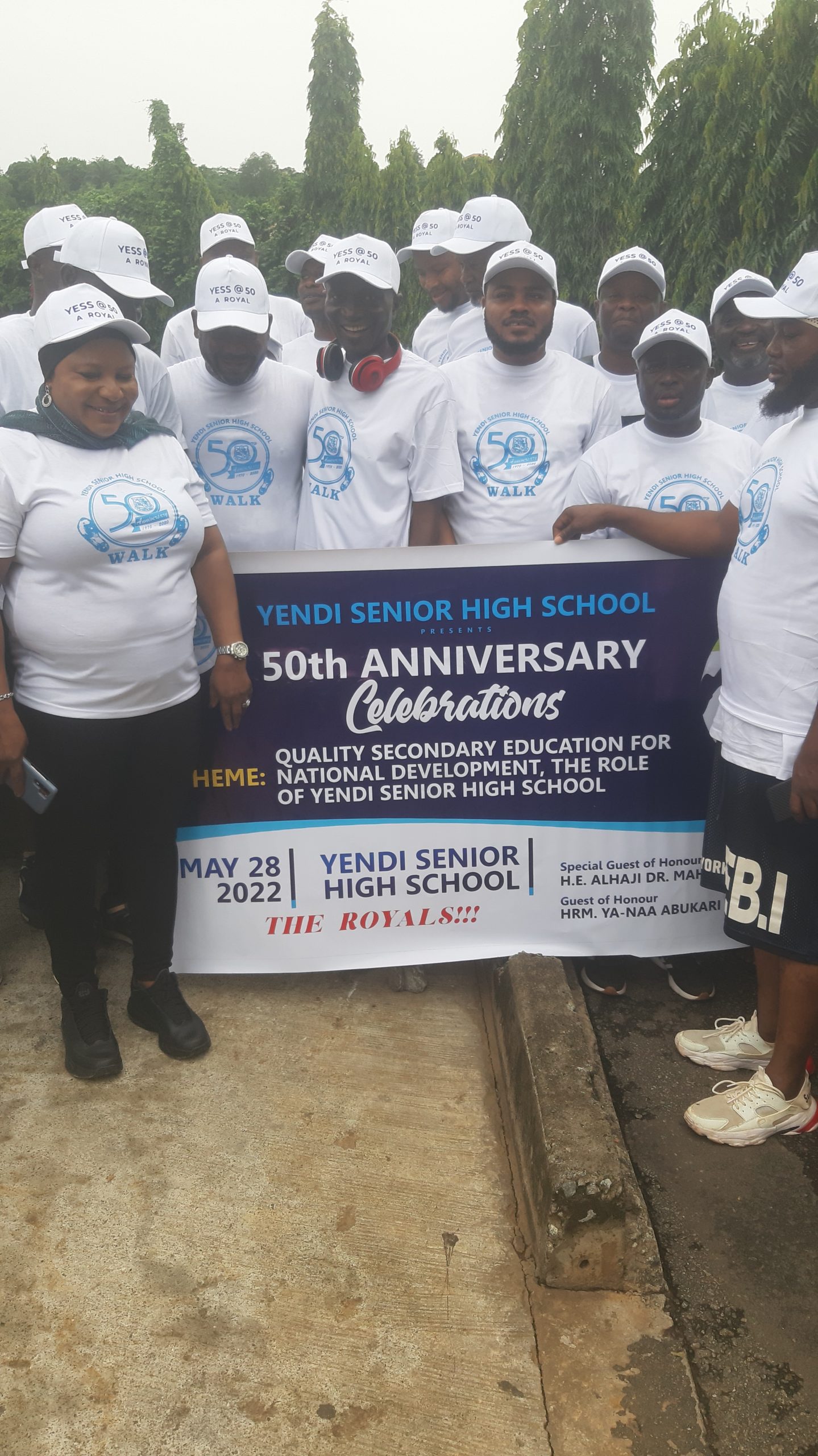 Accra, Ghana//Old Students of Yendi Senior High School (SHS) living in Accra today defied downpour to embark on the 50th anniversary’s health walk to create awareness on the activities line-up for the celebrations.

The walk which started from the Ayi Mensah Toll Booth and ended at Aburi Mountains lasted over two hours.

Speaking after the walk, Alhaji Mutaru Goro Iddrisu, National President of Old Students of the Yendi SHS popularly known as Royals, said the purpose of the health walk was to create awareness about the anniversary’s activities among themselves and the general public.

Similar health walks Alhaji Iddrisu said would be held in Tamale, the Northern regional capital; and Yendi, the traditional capital of Dagbon.

He added that walks formed part of effort of creating awareness on the main anniversary which falls on the 28th May 2022 which is expected to be graced by the Vice President of the Republic of Ghana, Alhaji Dr Mahamudu Bawumia,  as the Special Guest of Honour.

Alhaji Iddrisu also stated that His Royal Majesty, Yaa Na Abukari Mahama II will be the Guest of Honour for the occasion, while the Grand Durbar would be chaired by the Vice Chancellor, Tamale Technical University (TATU), Professor Abass Braimah.

The Guest Speaker for the day according to him would be the former Pro Vice Chancellor, University for Development Studies (UDS), Professor Seidu Alhassan.

The weeklong celebration is expected to commence on Sunday, May 22, 2022. Some of the activities lined up for the occasion include Float through some principal streets in Yendi, Inter-House Debate competition, Clean Up exercises, Symposium, Video Shows, Fun Games, Cultural Performances, among others.

Alhaji Iddrisu was quick to add that a number of development projects  have been undertaken by the Royals to give a face-lift to the school which is the first Senior Secondary in the capital of Dagbon kingdom, Yendi. It was established in November 1970 under the able leadership of Mr. C.B.A Teviu, the first headmaster of the school.

If you go to the school now, we have renovated 90% of the infrastructure. And we have built every beautiful, complex and very gargantuan  entrance gate of the school”, Alhaji Iddrisu elaborated to journalists during an interview.

What next after the anniversary?

“You know that education is continuous. So, we will continue to support the school. We will now from the physical to the nontangible which are the attitudes, behavioural, discipline, among others to improve on the academic performance.

Alhaji Iddrisu used the opportunity to all the Royals and associate members of the school for their unflinching support. He also thanked companies and individuals for their generous support.

On his part, the Member of Parliament (MP) for Mion in the Northern Region and a product of the school, Abdul-Aziz Ayaba Musah said the school has contributed greatly to the human resource base of the region and the country at large.

According to him, they are other four MPs in the current eighth Parliament of Ghana who are products of the Yendi Senior High School. These he mentioned are the MP for Chereponi, Razak Tahiru; MP and Deputy Minister of Sanitation and Water Resources, Amidu Issahaku Chinnia; MP for Sagnarigu, A.B.A Fuseini; and MP for Savelugu, Alhaji Jacob Iddrisu.