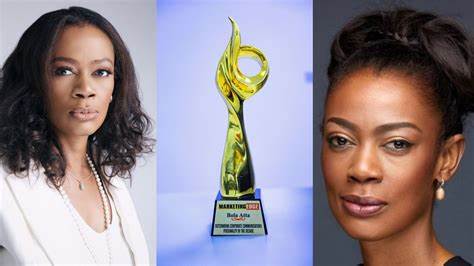 The awards ceremony, which celebrates excellence in Nigeria’s Integrated Marketing Communications industry attracted the very best of the Advertising world across Nigeria.

The award is in recognition of her commitment to excellence and the positioning of UBA as a foremost pan African Bank.

Her dedication to improving lives through her role as the CEO of the UBA Foundation, which has for many years, been impacting the lives of many through the foundation’s scholarship grants and other initiatives, also played a role in her being selected above her peers to receive this award.

Madam Bola Atta who graduated from the University of Sussex with a Bachelor’s degree in Economics and an M.B.A, in Marketing at Duquesne University qualified as the nominee for the prize as a result of her impressive contributions at the steer of UBA’s corporate communications with various laudable initiatives that have further increased the bank’s market share and brand presence.

Speaking on the award, she wrote on her Linkedin page: “I have always loved doing what I do and my objective has never been acclaim or recognition. It’s the milestones; the changing lives! Therein lies the fulfilment.

However, it is nice sometimes to receive an award especially from a highly reputable source. Grateful for the award as the Outstanding Corporate Communications Personality of the Decade. Wow! Thank you Marketing Edge!”

Madam Atta showed appreciation for the award saying that in her position as the Group Head of Communications at UBA she has to keep innovating and stay ahead of the ever changing creative landscape”.

At UBA I have grown a lot through the diversity and sheer size of the pan-African establishment. There are so many exciting tasks within the group, that you are constantly challenging yourself to get better”.

Madam Bola Atta has been the recipient of various awards and recognitions for her work. She was named as one of the 40 top Nigerians under 40 in 2008, listed as one of the 100 most influential women in Nigeria in March 2015 and was crowned Best Marketing professional in West Africa in 2017.

She more recently, received the honour from MIPAD as one of the world’s most influential 100 creatives of African descent for 2021.

Read the original article on This Day.