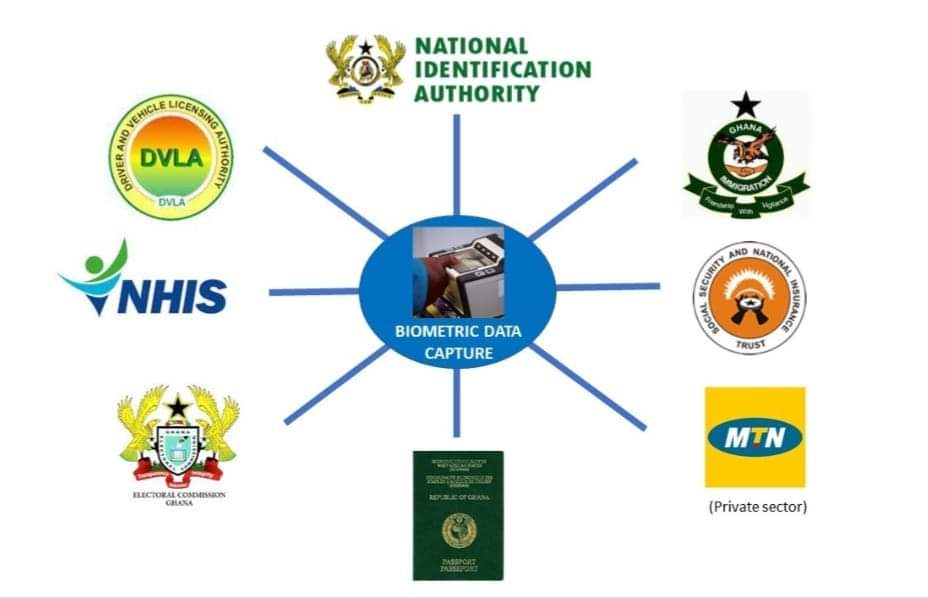 Accra, Ghana//-Afua Kwakwa (name changed for privacy reasons) visited Ghana during Christmas to see her parents. She combined her visit to her parents with a desire to accomplish a few tasks while on her month-long vacation in Accra.

On arrival at Kotoka International Airport, she completed an immigration form and also had her biometric data captured. The process through immigration specifically, and through the entire airport generally was quite smooth.

While in Accra she visited the passport office to renew her passport. Her previous passport was not a biometric passport. For the SECOND time, she had her biometric data captured.

She also visited Driver and Vehicle Licensing Authority (DVLA) to renew her Ghana drivers licence which had long expired. To her surprise, her biometric data was captured for the THIRD time.

She tried to access her bank accounts which had become dormant due to inactivity. She was informed that in order to access her account she needed a Ghana Card. Afua visited the National Identification Authority (NIA) in pursuant of the Ghana Card, and for the FOURTH time, her biometric data captured.

She was informed by friends in Ghana that she could lose her MTN number if she did not register her number with the provider.

She proceeded to MTN to register her SIM card and for the FIFTH time, had her biometric data captured. This was even after she had the Ghana Card.

This time, Afua was quite surprised because to the best of her knowledge, MTN is a private entity. All previous biometric captures were undertaken in Public or Government institutions.

Luckily for her, she had no intentions of working on a voters ID card otherwise she would have been subjected to the SIXTH biometric data capture.

It will not be surprising if in the future, she is asked for her biometric data again before being allowed to secure a voter’s ID.

Fortunately also, Afua had no intentions of enrolling in the National Health Insurance Scheme or accessing SSNIT, otherwise, she would have had her biometric data captured for the SEVENTH and EIGHTH time respectively.

Afua’s case may be unique and striking because she had to accomplish many tasks within a relatively short period. It is however a good illustration of the multiple times one has to have his/her biometric data captured and the possible implications.

This suggests a lack of coordination among the many Government agencies capturing biometric data and raises several questions which may require prompt attention.

First, why do we (Ghanaians) have to pay so many times for the same biometric data to be captured?

Second, is it not less safe to have our biometric data spread across many different institutions?

Third, is hacking not easier if so many different institutions with varying degrees/levels of security have our biometric data?

Fifth, can Government improve upon the integration and efficiency of the data collection and management by centralising these efforts as much as practical?

The Government’s efforts to collect biometric data are commendable but they must NOT be done in an uncoordinated manner. Integration is critical to improving efficiency, effectiveness and the safety of the data.

I am not an IT person and I will not pretend to be one but my limited knowledge tells me that we can do better than we are currently doing.

We must find ways to harmonise the data, weed out inaccuracies, strengthen the security and improve the overall integration of the system.

Our quest to increasingly capture biometric data must be combined with an appreciation for integration and data protection.

Hopefully, our Government will find ways to improve upon what prevails currently.