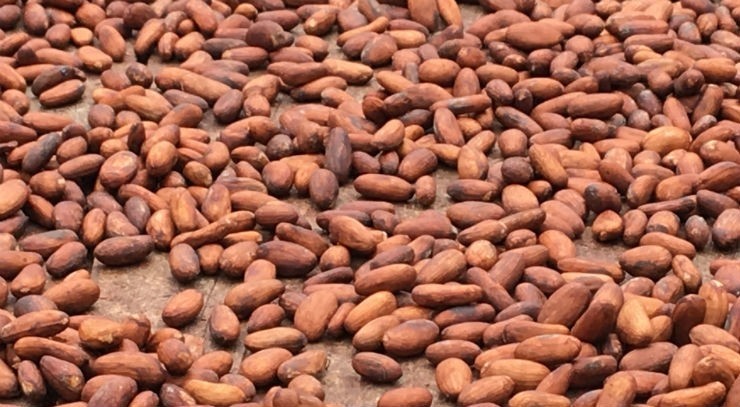 Accra, Ghana//-Maame Esi Yeboah, a 66-year-old cocoa peasant farmer at Akweteykrom, a cocoa growing community in the Central Region likes many cocoa farmers in the country’s forested regions walk through dangerous paths to harvest their cocoa.

The dry leaves on the ground crackle as they walk to their small farms with sharp machetes to detach the yellowish cocoa pods from the trees.

Afterward, they hand-picked the cocoa pods and split them with the machetes and removed the cocoa fruits for fermentation under banana leaves for a number of days and then dried the beans in the sun on wooden stands for about a week.

After that, the smallholder cocoa farmers would hire a truck to transport the beans through undulating roads for hours to the nearest designated cocoa purchasing centres.

Here, they sell the beans to License Buying Companies (LBCs) at a fixed floor price set by the Ghana Cocoa Board (COCOBOD), regulator of the country’s cocoa industry.

The LBCs buy the cocoa beans on behalf of COCOBOD,  while Cocoa Marketing Company (CMC) which is a wholly owned subsidiary of the COCOBOD resells the cocoa beans to both local and foreign processors including Olam, Cargill Hershey’s, Nestlé and Mondelez.

Industry experts said 60 percent of the cocoa produced in Ghana is exported to Europe and America, with the remaining 40 percent processed in the country into other bi-products such as chocolate, liquor, soap, body cream and other confectioneries like Milo and other products.

These products are mainly consumed by people living in urban Ghana, with the majority of the cocoa farmers having little or no knowledge about what cocoa is used for.

Over 95 percent of cocoa farmers in the country have lived in the typical rural hinterlands all their life, and have never tasted any of these bi-products produced from their cocoa, a Technical Extension Officer of the Cocoa Health Extension Division (CHED), Frank Antwi added.

However,  Maame Yeboah and her colleague smallholders in the cocoa producing regions- Ashanti,  Bono, Bono East, Ahafo, Central, Eastern, Western, Western North, and Volta are not making money due to the falling cocoa prices on the international market.

Cocoa prices continued to tumble as demand remains slow due to the devastating impact from the novel coronavirus pandemic and a large surplus in the international market is also expected in the 2020/21 season, a Reuters poll showed.

“Farmers have struggled to sell beans over the last 12 months, in large part due to the impact of COVID-19 in the hospitality sector, with closures denting demand,” said analyst Caroline Bain from Capital Economics.

According to her, COVID vaccines rollout and lifting of containment measures will be key to the market.

The pandemic has reduced grindings to as much as 10% compared to last year as out-of-home consumption of chocolate fell strongly.

But even if vaccination allows for a recovery in the hospitality sector, a large surplus will be left after that, the analysts said.

“Origins are behind on selling and the current market dynamics does not encourage (industry) buying early,” said an industry source.

Poll participants also cited as a bearish factor in the market the $400/tonne living income differential (LID) introduced last year by top producers Ivory Coast and Ghana, which led some consumers to be more conservative in their buying, helping to boost stocks at origins.

Casper Burgering, Senior economist Industrial Metals & Agricultural Commodities collaborated that concerns about farmers’ living standards are increasing in many countries, especially where agricultural commodities make up a large share of the economy.

The prices of cocoa beans have been tumbling for some time, causing many small-scale farms in Ghana and Ivory Coast to find themselves in financial difficulties.

“As the cocoa prices are too low, too many farmers will run into financial difficulties. The economic sustainability of the sector is at stake”.

As a result, with persistently low prices, some farmers are forced to stop farming. For instance in the Bono and Ahafo regions, some cocoa farmers are switching to crops such cashew, pineapple and cassava which are very profitable.

This according to industry watchers creates a worrisome and undesirable situation that does not benefit the cocoa farmers and the economy in the short, medium and long terms.

Although Ghana supplies about a fifth of the beans used by the $100 billion chocolate industry, it reaps about $2bn in annual export revenues after neighbouring Ivory Coast, the returns are rarely enough for farmers to break even.

Isaac Tetteh, 57-year-old cocoa farmer at Akuapem Mampong where the first cocoa was cultivated by Tetteh Quarshie who introduced cocoa farming to Ghana in the late 1880s, said: “We have been farming cocoa for years but our finances are not good”.

“The declining cocoa prices which are triggered by the covid-19 pandemic are going to worsen our plight. So, the government and COCOBOD should come to our aid”.

To address the cocoa price shocks on farmers, Ivory Coast and Ghana have joined forces to guarantee the living standards of their cocoa farmers.

The West African countries control around 60% of the world’s total production of cocoa beans. Also, cocoa beans from Ivory Coast and Ghana are of high quality.

That gives both countries clout with the cocoa-processing industry. Ultimately, the stakeholders agreed on a “living income” cocoa premium of  $400 per tonne on all cocoa contracts sold by the countries for the 2020/2021 season, according to Mr Burgering.

“In addition to the effects of weather conditions, the price of cocoa is also heavily influenced by supply developments in Ivory Coast and Ghana. Cocoa news from Ivory Coast, which accounts for 42% of global output, has a particularly large effect on the price trend of cocoa on the world market”.

Realising this, government agencies in Ivory Coast and Ghana especially COCOBOD and other interest groups in the countries are committed to improving conditions for farmers.

Their aim according to experts is to secure a higher income for their farmers to prevent poverty. This is designed to safeguard the continuity of the sector in the long term.

To achieve this, the authorities have various options at their disposal, such as the introduction of floor prices or the granting of export subsidies.

For their part, however, these measures can also cause problems. They tend to encourage overproduction and sometimes lead to illegality including cocoa beans smuggling.

How importance is the crop to the farmers and the nation

Opanyin Kwame Adu, a 45-year-old cocoa farmer at Seikwa in the Bono Region, said: “The cocoa beans are a very important source of income for people in Seikwa and its neighbouring communities”.

Cocoa plays an important role in the economy of Ghana. The cocoa industry employs approximately 800,000 farm families spread over six of the ten regions of Ghana. The crop generates about $2 billion in foreign exchange annually and is a major contributor to Government Revenue and GDP.

Cocoa which is the mainstay of Ghana’s economy is cultivated in nine regions out of the 16 regions of the country. About 850,000 farm families spread over these cocoa regions of Ghana are believed to be involved in cocoa farming and its related activities.

The crop generates about $2 billion in foreign exchange annually and a major contributor to the country’s Gross Domestic Product (GDP), according to COCOBOD.

Recently, the Chief Executive of Ghana COCOBOD, Joseph Boahen Aidoo revealed that Ghana is on track to meet the 50 per cent local processing target of cocoa beans produced in the country.

This is in line with the government’s agenda to increase cocoa production to one million metric tonnes per annum.

Although Ghana is currently processing about 40 percent of its cocoa beans locally, Mr Aidoo is confident that the country will soon meet the 50 percent target.

To this end, COCOBOD would strengthen its incentive packages to help local processors and artisanal chocolate makers expand their businesses, he said at the launch of National Chocolate Week celebrations this month.

The new factory Mr Aidoo noted would increase the capacity of local production to about 550,000 tonnes which puts the local processors in a good position to meet the government’s 50 percent processing target.

In recent times, many Ghanaians especially those in the urban areas have cultivated the habit of consuming cocoa products including chocolates, pebbles, and cocoa powder due to their numerous health and nutritional benefits.

But the problem with the current Covid-19 pandemic is that nobody knows when it will be abated. So, the Government of Ghana and COCOBOD should do something drastic to alleviate the plight of the cocoa farmers.