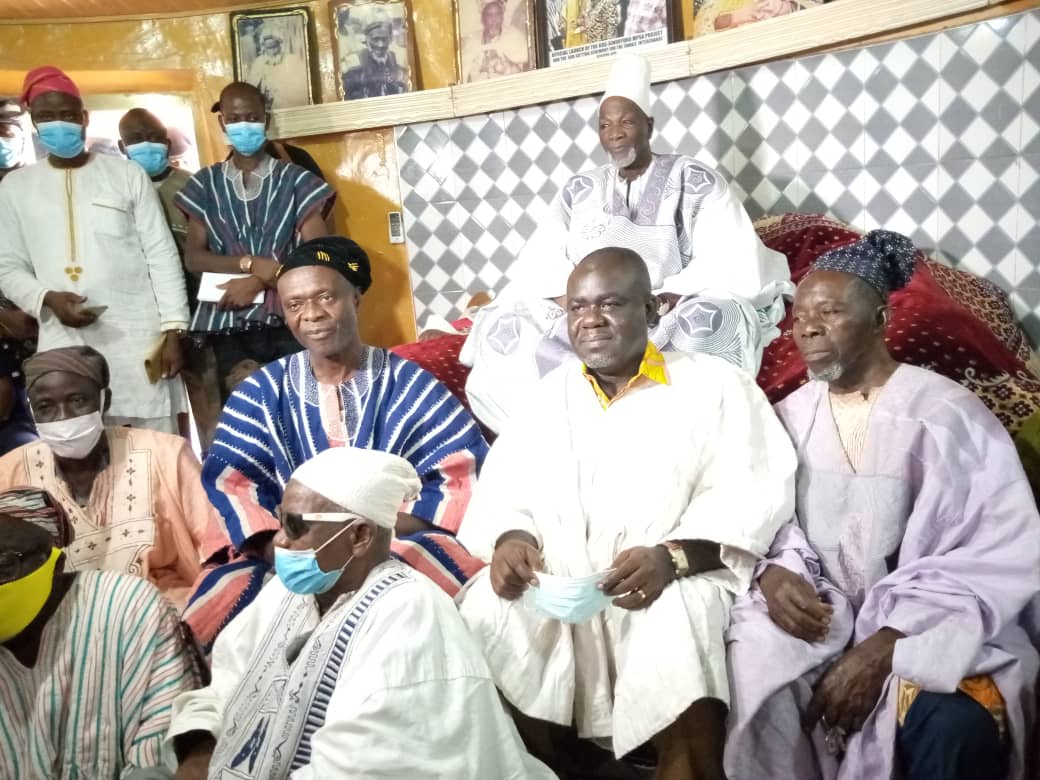 Yendi, Northern Region, Ghana//-The Minister for Transport & Aviation,  Kweku Ofori Asiamah, has assured the Overlord and people of Dagbon that President Akufo-Addo’s second term in office will see him bring more developmental projects to their doorsteps, especially, in Yendi.

One of such developmental projects, he noted, is the construction of a DVLA Office with modern facilities to serve the area as well as other communities nearby.

“Developing the northern parts of Ghana, especially, Yendi remains a top priority of His Excellency Nana Addo Dankwa Akufo-Addo. That if we are able to put up a very nice DVLA Office here, it will as well serve the people of Saboba, Zabzugu, Tatale, Bimbilla, Kpandai, Wulensi and other communities. All of them will come here and transact business. We need to protect the lives of our people”, he noted.

He added: “If somebody buys a motor and wants to use it here in Yendi and you tell that person to go and register it in Tamale, he or she won’t go. So, as part of the President’s vision that we must take development to the doorsteps of the people, we will make sure that we build a modern DVLA Office and furnish it with modern equipment to enable us to train our people and license them properly.

We don’t want the police to continue to harass them because it is the duty of the police to make sure that whoever drives a motorbike or a car must have the appropriate license. So, if we don’t bring a DVLA Office here, they will either go to goro boys for them to be given a fake license or they won’t even go at all”.

The Minister for Transport and Aviation, Hon. Kwaku Ofori Asiamah being taken through the designs of the Tamale Airport phase II project by the Managing Director of the Ghana Airports Company Limited, Mr. Yaw Kwakwa

Mr Asiamah made this observation on Friday, March 27, 2021, when he in the company of the Northern Regional Minister, Shani Alhassan Saibu, led a delegation from the Ministry of Transport & Aviation, Ghana Airports Company Limited (GACL) and the Ghana Civil Aviation Authority (GCAA) to a pay a courtesy call on the Overlord of Dagbon, Ya Naa Abukari II, in Yendi, to ask for his permission and blessings to inspect the ongoing Tamale Airport phase II project.

Commenting further, Mr Asiamah said it was important for one to live a worthy life. Therefore, a DVLA Office for the people of Yendi and nearby communities, will help reduce the trauma that victims of motor accident go through when the motorbike or car in which the victims were travelling in do not have an insurance.

So, I am assuring the King of Dagbon that we are working on building a DVLA Office in Yendi. It will not be long for you to see the construction of the DVLA Office here”, he posited.

His comment was in reaction to an appeal made by the Overlord of Dagbon in his welcome remakrs which was read on his behalf by Dr. Jacob Yakubu Mahama.

Appeal by Overlord of Dagbon

Ya Naa Abukari II had complained bitterly about the increasing indiscipline on road networks within the Yendi Municipality by drivers and motorists leading to hikes in the spate of motor accidents, a situation he largely attributed to unlicensed drivers.

Due to the situation at hand, he said precious lives are lost almost every day, stressing that there was the need to minimize the occurrence if not totally eliminated.

To curb the occurrence, the Overlord of Dagbon, appealed to the Transport & Aviation Minister to facilitate the opening of a DVLA branch office in Yendi to serve the Eastern Corridor.

“Motorcycles are the most popular means of transportation in northern Ghana, and their accidents are major causes of out-patient attendance and admissions in our hospitals. Precious lives are lost daily due to motor accidents, especially among the youth. Safety on our roads is also limited by unlicensed drives and riders.

Many riders are unlicensed because they have to travel to Tamale to acquire license and also to register their vehicles or motorcycles. It is in this light that I appeal to you to facilitate easy access to the services of the DVLA by opening a branch in Yendi to serve the Eastern Corridor”, he appealed.

The King also appealed to the government to as a matter of urgency, roll out the phase III of the Tamale Airport Project which is the expansion of the terminal and some other facilities “to avoid an encounter with serious difficulties upon the completion of the phase II of the project”.

He further appealed to the government to consider the development and upgrade of the Yendi Airstrip to the status of an airport since the area has little or no opportunity for water transport but huge potential for air transport.

Responding to the appeals made by the King, Mr Asiamah assured that the Yendi Airstrip project will soon takeoff when all the technical challenges are addressed.

For instance, the proposed site which was previously an airstrip, has been encroached upon, with portions of the the landed property housing several households. A portion the land has also been fixed on it a telecommunication mast to facilitate communication services in the area.

Government is now torn between choosing the old site and pay compensation to owners of the houses closer to the proposed airstrip location or go in for a new site.

“Government can take a decision after the technical experts have completed their work. This is a promise that the President has made to the Overlord of Dagbon that the airstrip that we used to have in Yendi, which was very useful, we will not allow it to go waste. If you look at that zone, we need that facility”, he emphasized.