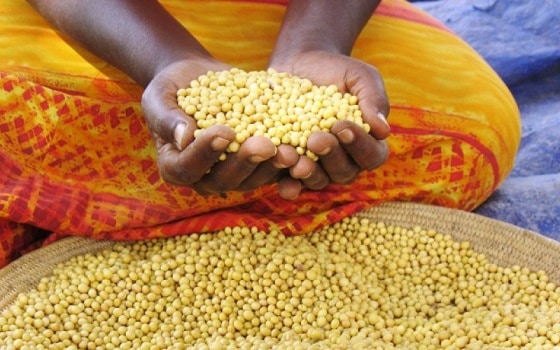 Accra, Ghana//-Local soya bean producers and processors have lamented that a lack of attention from government has resulted in collapse of the industry – leading to a total export of raw soya beans produced in the country.

Data from the Council for Scientific and Industrial Research (CSIR) show that soya beans are not only important in poultry feed production but can also be processed to produce (assuming the beans are non-GMO and organic) vegetable oil, tofu, meat-substitutes like soya-mince and chunks, milk, ice-cream and a host of other healthy, vitamin-E and protein-rich foods – creating thousands of jobs for Ghanaians while affording them access to relatively cheap nutrition.

Speaking to B&FT, the CEO of soya processing company Taipana Limited and Convener of the Rice Millers Association of Ghana, Yaw Adu Poku, said local processors have lost the market to Indian investors who buy all the raw beans and add value to them before re-importing them to Ghana.

“All of us who went into soya processing are on our knees,” Mr. Adu Poku said – recounting that a solar plant he invested in over a decade ago that could produce 50 tonnes of vegetable oil is no more because government only concentrated on producing the beans without proper policies for off-takers.

“Government policy was only to create a job for the farmers. So, the farmers produced and there was no buyer. We stepped in to buy, but there was no deliberate policy to support the processors and so the Indians took advantage of the loopholes.”

Mr. Adu Poku said proposals and lobbying have been carried out by soya bean processors to convince government it should be included in its flagship programme One District, One Factory – but to no avail.

“With soya bean processing, you can kill 20 birds with one stone. Exporting the raw beans is not in our interest. Processing it right here will support our poultry industry, and Ghana will not have to import eggs from Burkina Faso.”

Mr Adu Poku explained that some Ghanaian processors in the initial stages had a challenge with extracting 90 percent of the oil from beans when producing the poultry feed.

Even though this was a challenge with some local processors, he maintained that such processors needed government support to upgrade their operations and also buy new equipment. “But because there was no policy to support the local processors, the Indians saw an opportunity there and created a market for the raw beans to be exported without processing.”

Mr. Adu Poku narrated that he had to lay-off tens of his workers as production capacity began to decline. “I do not have any grudge with the Indian investors. I am rather speaking to our government that we are losing millions of dollars from importing vegetable oil and expensive poultry feed.”

Mr. Adu Poku stated that with the Ghana Commodity Exchange (GCX) in existence and operating, there is no reason to reinvent the wheel. He appealed for the Ministry of Food and Agriculture to include revamping soya bean processing plants in the One District, One Factory policy.

He is optimistic such a move would enable processors to access cheaper funds to make their production competitive. “We can do it here in Ghana. Why should we produce raw soya beans for export, then we go and import it back with added value at a high cost? Look at the amount of foreign exchange used to import oil into the country,” he noted.