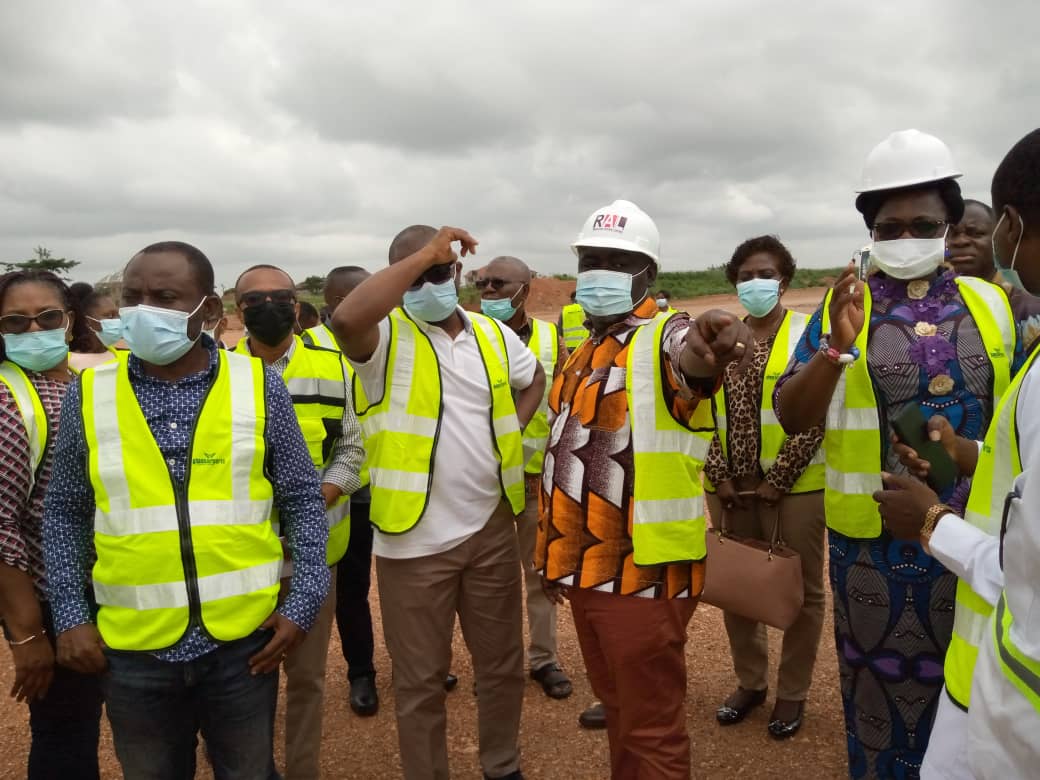 Sunyani//-Ghana’s Minister for Transport, Kwaku Ofori Asiamah, has directed the Ghana Airports Company Limited (GACL) to take immediate steps to pull down all private and commercial buildings that have encroached the Sunyani Airport land.

He has further directed the GACL to ensure all buildings with silver roofing sheets that are closer to the Sunyani Airport are removed or replaced with roofing materials that meet Aviation standards. Affected victims who fail to comply with this directive will also have their roofing sheets being removed.

The directive is expected to be carried before the project is completed by end of May, 2021. This is to ensure the safe arrival and departure of airplanes that will be using Sunyani Airport facility.

According to the Transport Minister, the directives are not only meant to comply with Aviation standards but also to ensure the health safety of the people.

“We don’t want an accident to occur before they will come and say that we saw the building project and did not act”, he noted.

Mr Asiamah made these observations when he paid a working visit to Sunyani in the Bono Region on Monday, March 29, 2021, to inspect the rehabilitation of the Sunyani Airport project.

Commenting further, Mr Asiamah said if an action is not taken to restore the encroached land, it will also affect future plans of the airport, thus, if they want to expand the facility.

Asked whether the encroachers will be compensated, the Transport Minister answered in the negative.

“We will not give anybody compensation package knowing that the land does not belong to them. It is wrong for them to come and build on government land – the land that we are going to use to build airport for the benefit of everybody in this country, particularly, for the people of Bono, you cannot come and build an individual house there hoping that government should come and compensate you. When the time comes, we will not compensate anybody”, he stressed.

Touching on the level of progress made on the project, Mr Asiamah said: “The contractor is on course and on time. I was afraid that maybe because of the COVID-19, they were going to have the issue of project overrun cost but the contractor has assured me that they are within time and have completed about 95% of the project.

We are hoping that by the end of May, the project will be completed for the airlines to start flying there. This airport will start running again”.

The Bono Regional Minister, Justina Owusu Banahene, commenting on the project said once it is completed, it will ease trade and boost economic activities in the region.

She assured of teaming up with the Municipal Chief Executive of Sunyani West to educate those who have encroached on the airport lands to vacate the land, stressing that “encroachment should be out from the project site”.

The MD of GACL, Yaw Kwakwa on his part was hopeful that the project will be completed on schedule.

He indicated that the runaway which has been extended from 1,280 meters to 1, 400 meters with additional 60 meters at each end may be extended to 1,900 meters as far as their future plans are concerned.

Since 2015, no plane has been able to land at the Sunyani airport as a result of damages on the runaway. Even though the then government secured $400million loan facility from the African Development Bank (AfDB) to construct terminal 3 and other airport projects, priority was not given to that of the Sunyani Airport, therefore, abandoning the runaway to further deteriorate.

On June 25, 2019, government signed a contract agreement with Messrs Resources Access Limited (RAL) for the Rehabilitation of the Sunyani Airport at an estimated cost over GH₵48.7 million. The consultant to the project is Engineering Services Provision Company Limited (ESPCo).

However, the contract period was revised, making the duration 17 months. The project is expected to be completed by end May, 2021.