Accra, Ghana, October 7, 2020//-David Tamakloe, the Managing Editor of Whatsup News, a virtual newspaper has been picked up by the police.

He was picked up this afternoon from his office.

Mr Tamakloe who is an executive member of the Private Newspaper and Online Publishers Association of Ghana (PRINPAG) is currently at the Tesano Police station.

One of his workers who is also at the police station confirmed to ModernGhana News. Another worker told ModernGhana News that his arrest is in connection to a publication.

He was arrested over the publication below: 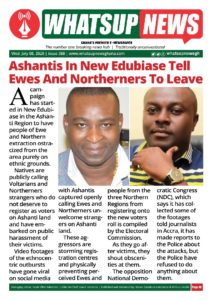 Checks at the Tesano police station indicated that Mr Tamakloe was at the station with his lawyers. Since the assumption of office of the Akufo-led government several Ghanaian journalists have been intimidated by the police, party officials and some members of the government.