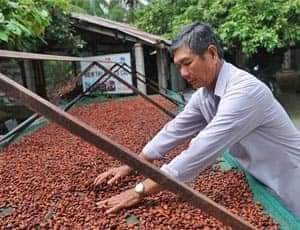 Accra, Ghana//-The news that broke that China has exported some quantities of cocoa beans to Belgium has generated fuss among Ghanaians.

Many Ghanaians who reacted to the news published on social media particularly Facebook, said China is bent on breaking Ghana’s and Ivory Coast’s cocoa production and export dominance.

The two West African countries control 60% of the world’s total production of cocoa beans. Also, cocoa beans from Ivory Coast and Ghana are of high quality.

Reacting to the news, Jennifer Nimako Boateng said:  “It is terrifying, the prospect of having China in the game. We know how they play; they don’t relax till they dominate. Ghana can kiss its cocoa edge goodnight soon….”.

Another Ghanaian by the name Kojo Zer said: “Trouble for Ghana and Ivory Coast”.

Ralph Ofori-Adeniran, a Ghanaian journalist based Germany lamented that Ghana and Ivory Coast would start importing cocoa beans from China to increase their production.

In his words: “Very soon Ghana and Ivory Coast will start importing cocoa beans from China, because China has started producing cocoa!…

Our incompetent politicians are simply full of talk. After talking a good game, they go back to the same old colonial business module-exporting raw materials only”.

Meanwhile, typical of China’s “copycatting”, they have probably developed a GMO cocoa strain and will soon overtake the world’s 80% producers (Ghana & Ivory Coast)”.

He asked: “What really happened to that spirit in Tetteh Quashie, who saw the Basel missionaries cultivating and making chocolate in Akropong Akuapem and deciding that he was going to transform Ghana into the world’s biggest cocoa producer?

He eventually succeeded and made the country produce more cocoa than even its native origin in South America, Mr Ofori-Adeniran said.

“Well, now, with China in the game, the tables are about to turn….Lest I forget, I can very much confirm that China will overtake Ghana soon in cocoa production. Guess why? Well, it is the Chinese who are destroying all the cocoa farms in Ghana at the moment and in the guise of illegal gold mining.

Worst still, the current political class in Ghana-the New Patriotic Party (NPP) are gleefully helping the Chinese in the destruction. You see how narrow-minded politicians are?”

For Akua Konadu:  “Those guys don’t just do anything without a long-term agenda. They destroy our cocoa farms and we think it is just about illegal mining. It is called Hegelian Dialectic-misdirect people from their true intentions…..”

Bernice Bessey, another journalist working in a local newspaper said: “It serves us right. If politicians, chiefs and citizens out of foolishness will give out their land to foreigners to mine and destroy the land in the process.

Somebody working at cocobod is paid more than a farmer producing the cocoa beans. We relapse into colonialism since our greediness wouldn’t let us be rational human beings”.

However, Victor A-Addo treated the Chinese entry into the cocoa production space with a pinch of salt, saying: “Forget them, let’s just produce the ones we have left, for ourselves”.

So the ordinary Ghanaian can actually start feeling what our chocolate tastes like…Ghana must produce their own for their own”.

He continued: “Personally, I think this is an opportunity for Africa to shut their doors and concentrate on themselves.  If Africans don’t buy from China….they will collapse. ..Simple as that…They can’t force us to buy…”

“…and you will appreciate how stealthily they have sprung on us all. Who knew China was developing a cocoa industry?  Not that they needed our permission. But just to show how noisy we are in everything we do”, Nene Azu stated.