The COVID-19 shock demonstrated the power of policy. The quick rebound of investment in Europe (excluding in Ireland, where real investment is lagging behind) shows that public support was crucial in softening the impact of the economic shock on firms and households.

However, there are signs that the COVID-19 crisis has exacerbated existing asymmetries and inequalities. The pandemic’s impact is not being felt evenly across Europe. Regions are rebounding at different speeds. While digitalisation and the green transformation of the economy are accelerating profound structural change, Europe risks becoming more unequal.

These are some key findings of the 2022 edition of the EIB’s annual Investment Report, Recovery as a springboard for change. The report, the most comprehensive, regular examination of investment in the EU, looks back at the impact of the pandemic on individuals, firms and countries within the European Union.

It also looks forward, at how to use the recovery as a springboard for transformation by examining investment in climate change and digitalisation. And it discusses the role of public support in ensuring a just recovery, preventing rising inequalities.

You can read the key findings here

“Public support was and remains crucial in safeguarding jobs and keeping business afloat during the pandemic. But our latest investment report shows that the different social and regional vulnerabilities that existed before the crisis are exacerbating an uneven recovery and amplifying existing heterogeneity,” said EIB Vice-President Ricardo Mourinho Félix. “That is why the EIB will consistently ensure that the opportunities offered by the transition to a greener and more digital economy are shared throughout the European Union. Modernising infrastructure must be accompanied by further investment in social infrastructure — and particularly in talent, skills and training — to make this historical transition one that is just for all.”

“In less than two years, real gross domestic product (GDP) and investment are back to pre-pandemic levels. Policy support has been crucial for the recovery, but the crisis is not over. Vulnerabilities and risks of asymmetries persist, while the capacity of firms and people to adapt to the new normal has still to be tested. Omicron is adding to the challenges, substantially increasing uncertainty,” said EIB Chief Economist Debora Revoltella.

“This is the time to start focusing on the future. Investment needs are huge, to adapt to the new normal and reap the benefits of the green and digital transition. Public and private investment have to complement each other. This calls for continued policy focus on public investment and increased efforts to catalyse private investment.”

Investment in the European Union: Policy support weakened the link between the impact of the crisis and future investment

Throughout Europe, real gross fixed capital formation — a measure of investment — declined substantially in 2020, but less than predicted. Moreover, it took just two years for investment to recover from the pandemic shock, compared to more than a decade after the global financial crisis. By the end of the second quarter of 2020, real investment in the European Union fell by a dizzying 14.6% relative to the fourth quarter of 2019. It quickly rebounded, however, and returned to its 2019 level by the second quarter of 2021 (excluding Ireland).

While the initial shock of the COVID-19 crisis was largely indiscriminate and all countries in the European Union were hit, the impact has now become more uneven with investment recovering at different speeds. By the second quarter of 2021, real gross fixed capital formation was above pre-pandemic levels (compared to the fourth quarter of 2019) in 20 EU members, and below pre-crisis levels in seven countries.

The EIB Investment Report shows that public support was widespread and targeted firms most in need, but not “zombie” firms that were already financially weak. Firms with low cash buffers were significantly more likely to receive policy support. However, indicators of long-standing financial weakness, such as excessive debt, low interest coverage or low returns on assets, had no significant effect on whether a firm received assistance.

What is even more important is that the policy support allowed firms to maintain their investment plans, irrespective of the sales losses experienced. Firms that received support were also more likely to preserve their investment programmes and therefore accelerate their transformation.

European firms now expect to increase investment this year. The proportion of firms investing in the past year was relatively low (79%), but a net balance of +18% of firms expected to increase investment in 2021, a sharp turnaround from the previous year (-28%). Sentiment indicators for the economic climate and availability of internal finance are switching back to positive as the recovery takes hold.

Policy support and investment plans, by loss of sales

In the European Union, policy was successful at preserving jobs and preventing a significant rise in unemployment overall, but labour market conditions deteriorated for young people and those with less education. Adverse employment effects, although limited overall, were concentrated among the under-30s and those with lower levels of education.

Improving skills and retraining will need to become key policy targets to tackle the looming problem of reallocation in the labour market, avoiding a scenario where workers are trapped, on a large scale, in declining industries and failing firms.

Employment fell most for the young

EU firms have been digitalising as a response to the COVID-19 crisis, but less so than US firms. Some 46% of EU firms have responded to the pandemic by becoming more digital, vs. 58% in the United States. The share of US firms that have already adopted advanced digital technologies is also higher: 66% vs. 61% in the European Union.

In the European Union, firms that had already implemented advanced digital technologies were more likely to digitalise further as a result of the pandemic — making it even harder for slow adopters to catch up.

While close to half of firms that had already implemented advanced digital technologies said they increased their digitalisation as a response to the pandemic, only a third of less digitally advanced firms said the same. In Europe, 26% of firms fall into the “neither” category. They are neither digitally advanced nor on the way to becoming more digital as a response to the pandemic. This compares to 18% of similar firms in the United States.

This growing digital divide poses risks for the labour market. In Europe, 33% of jobs are associated with firms that are doing nothing in the digital sphere, compared with some 20% in the United States.

Investment in climate change stalled due to the pandemic, but the EU policy leadership is paying off for the future, with more firms expecting to invest and a booming EU greentech sector

Around 43% of European firms invested in climate measures to address physical and transition risks — more than in the United States — despite some investment stalling because of the pandemic. The proportion of firms investing in climate measures is marginally below the 45% reported in 2020, but a growing number of firms expect to invest in the coming years. Overall, the share of EU firms investing and expecting to invest in the climate remains significantly higher than in the United States.

Supporting innovation among firms focusing on green technologies is a key element of Europe’s net-zero emissions strategy. By lowering the cost of greenhouse gas abatement or pollution reduction, greentech innovation can ensure the European Union reaches climate neutrality in a cost-efficient manner.

Financing for greentech innovation has been on the rise in recent years. After a minor setback from 2013 to 2016, venture capital and private equity investments in European greentech companies increased sharply from 2017 onwards, reflecting growing societal concerns about the environment and sustainability, and the increased focus of EU policymakers on private financing as a catalyst for the green revolution. 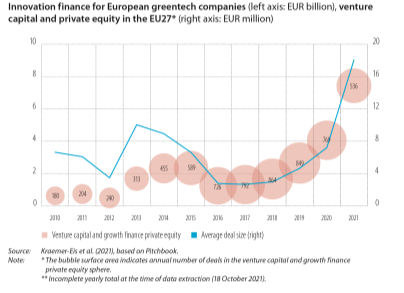 The EIB annual report on Investment and Investment Finance is a product of the EIB Economics Department, providing a comprehensive overview of developments and drivers of investment and its financing in the European Union. It combines an analysis and understanding of key market trends and developments with a more in-depth thematic focus, which this year is devoted to European progress towards a smart and green future in a post-COVID-19 world. The report draws extensively on the results of the annual EIB Investment Survey (EIBIS) and the EIB Municipality Survey.

It complements internal EIB analysis with contributions from leading experts in the field.

About the Economics Department of the EIB

The mission of the EIB Economics Department is to provide economic analyses and studies to support the Bank in its operations and in the definition of its positioning, strategy and policy. The department, a team of 40 economists, is headed by EIB Chief Economist Debora Revoltella. Find out more about the EIB’s research here.