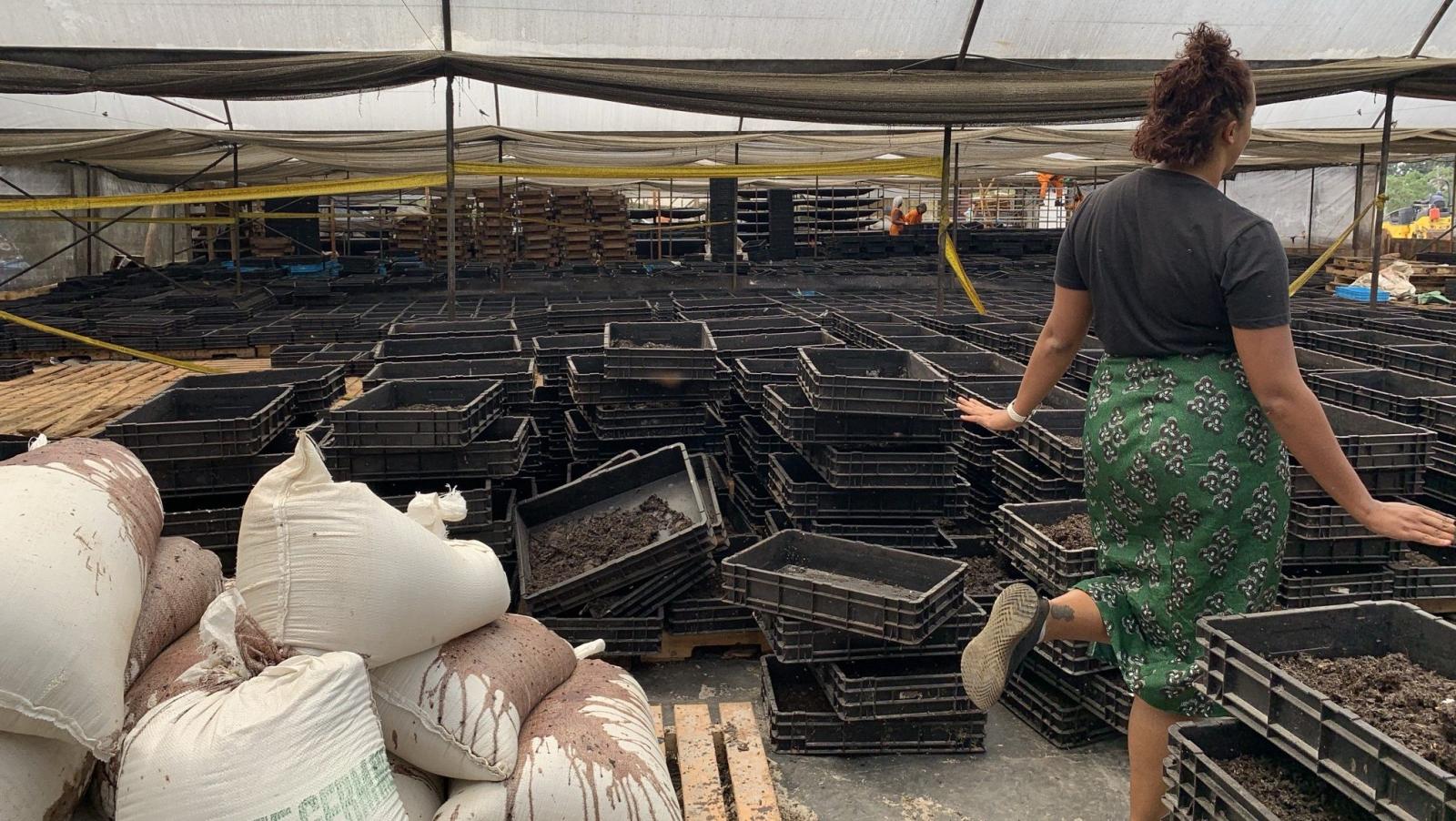 A farm for maggots? It’s a tough sell for some. But not for Talash Hujibers, who decided to try her hand at insect farming when she saw the smattering of insect-protein companies popping up around Europe while at school there.

Hujibers grew up on a farm near Nairobi. After studying agribusiness in the Netherlands, she came home and dove headfirst into a swarm of flies, food waste, and fundraising—on a mission to produce enough animal feed to replace soy and fishmeal as both grow increasingly unsustainable.

Now 25, she employs 64 people, and is courting investors who may want to help her scale.

Hujiber’s firm, InsectiPro, is not the first to take this fly-feed idea and run with it, but it’s vying to be among the few to both scale and turn a profit. She expects to repay her $1.5 million investment by the end of this year, which would make her a rare success in a space that’s been hot for several years, but still racing to prove its concept.

Though Barclays has estimated the insect protein space will be worth $8 billion globally by 2030, its major players in regions like Europe have blown through capital and struggled to produce at scale.

At least in Africa, InsectiPro’s traction might signal the industry’s future. With its conducive climate, welcoming regulatory environment, and urgent demand for new sources of animal feed protein, east Africa is uniquely poised to take the lead.

“Kenya’s climate and organized chaos allow the insects to thrive,” says Hujibers. “While there’s a bit of organization in waste management, the waste doesn’t have a place to go, so companies like InsectiPro can step in and fill a gap in a sustainable, circular way.”

At first, Hujibers thought she’d try fish farming. But when she learned how pricey the feed was, she got curious about alternatives. She caught wind of the Black Soldier Fly (BSF), whose larvae can be boiled, dried, and fed to fish and livestock. “How is this insect so magical?” she recalls thinking.

At least on paper, the model sounds too good to be true. The flies feed on old food scraps from local grocers and restaurants. Their eggs (the maggots) are then converted into protein-rich animal feed, which is cheaper and often healthier than traditional feeds like fishmeal and soy. Some firms also sell droppings from the maggots as fertilizer.

It’s a win-win-win: Organic waste gets diverted from landfills, while small-hold farmers get to cut costs while maintaining the nutrition requirements of their livestock. BSF also demands less water and arable land than other options.
Soy farming has been linked to deforestation and land-grabbing, and overfishing has made fishmeal costly and unsustainable. As global food demand is projected to rise 70% by 2050, creating a protein shortage and food crisis in which east Africa is especially vulnerable, bringing BSF into the mix sounds like a no-brainer.

Of course, the reality is never that simple. Hujibers’ predecessors have learned the hard way that despite flies’ pesky ability to survive where we don’t want them to, rearing them at scale has proven tricky.

The industry’s first big player, AgriProtein, got its start in South Africa 10 years ago before relocating to the UK last year. It spent more than $135 million on R&D trying to figure out how to scale, and announced big plans in 2017 to partner with construction conglomerate Christof Industries to erect 100 new factories worldwide. Four years later, it’s in the process of selling its flagship facility in Cape Town and its UK operations are under administration, a form of insolvency proceedings, CEO Jason Drew confirmed.

Drew says the Cape Town R&D and production test facility “has been invaluable as we developed our large scale factories,” he explained, but “the site has come to the end of its usefulness for the group.” While two new sites in California and the Netherlands are complete, building timelines have been delayed, and the other 98 have not even been started.

Cobus Kotze was a founding team member of AgriProtein, and worked closely with Drew for almost 10 years. He now runs his own smaller BSF operation nearby in Cape Town.

In his view, the African context lends itself to smaller-scale and lower-tech approaches. Given the low price of feed here, repaying massive capital expenditures on top-tier technologies for controlling the flies’ climate and purifying the waste they eat ultimately requires production on too unwieldy a scale. Among other things, it becomes hard to secure a steady stream of waste.

“There’s a real danger in the space of thinking the solution is just high-tech, higher-tech, more sophisticated,” Kotze says. “But there’s a balance there—you have to find the right technology that fits the price point of the market you’re producing in.”

That’s why Hujibers and a growing group of Kenyan BSF entrepreneurs are doing things a bit differently.

While AgriProtein and big European firms like France’s Ynsect and the UK’s Entocyle have raised and spent hundreds of millions honing optimal environments for their flies, scrappier Kenyan startups have a unique advantage: the flies can thrive in the country’s natural climate.

Rather than spending exorbitantly getting her climate just right, Hujibers has just two climate-controlled rooms and instead leans heavily on heat guns and sprinkler systems. She says even though this makes the flies a bit less efficient than they could be, the cost-savings are well worth it.

Other BSF pioneers in the region include Ecodudu, which recently received funding from the Frankfurt-based impact investing fund Greentec Capital Partners, and Victory Farms, the country’s largest producer of Tilapia fish, which launched a BSF pilot in May 2020 to try to cut costs on fish feed.

In addition to the conducive climate, a major driver of all this buzz around Nairobi has been the International Center of Insect Physiology and Ecology (ICIPE), which was founded in 1970.

Based just 12 kilometers (7.5 miles) outside the city, it has partnered with the Rockefeller Foundation to spread the BSF gospel in the region by offering training and dispensing larvae. Most local BSF entrepreneurs got their start there, including both Hujibers and Laura Stanford, founder of The BUG Picture; the two used to share a greenhouse.

“We’d experiment together and learn from each other’s mistakes, which made it less lonely,” says Stanford, whose firm also champions the leaner, imperfect-environment approach. “And it was cool that it was another girl, since as we know the world is overrun with men in business.”

Indeed, BSF has been a unique catalyst for female entrepreneurship. According to Dr. Chrysantus Tanga, the entomologist leading INCIPE’s training program, 40% of the 11,600 farmers they’ve trained in the last three years have been women. As control of land and capital in Kenya still skews heavily male, and BSF requires less of both than other kinds of farming, it’s proven to be more accessible.

As a female entrepreneur, however, it’s notoriously tough to secure capital—and even tougher as one based in Africa—so Hujibers got her start by piggybacking off her father’s flower farm, Terrasol.

She now produces about 2-3 tons of feed per day and still can’t keep up with demand. And she’s out-producing the one local player that’s had no shortage of capital: her MIT-trained competitors over at Sanergy hope to hit 50 tons per month of BSF feed by the end of May, while she expects to be closer to 150 by that point.

This is in part because Sanergy comes to the world of BSF from a slightly different angle: rather than food scraps, their flies eat human poop. The company’s focus is on tackling urban sanitation by building low-cost toilets in the city’s slums and turning the waste into fertilizer—but they realized a few years in that rearing BSF would get them more bang for their buck: animal feed, with fertilizer as a byproduct.

Flush with cash from a cadre of impact investors like Echoing Green, Ashoka, the Gates Foundation, Novastar, and the Finnish and Dutch governments, they’ve recently attracted more commercially-minded funders Axa and Cornerstone. Much like AgriProtein, however, they face the high costs and challenges that come with working from dirtier wastes.

“The advantage in Kenya is that BSF work here is really tying into the government’s agenda on the circular economy,” says Sanergy CEO David Auerbach. Indeed, while regulations still hinder the industry’s growth in many states, Tanga and INCIPE have successfully engaged policymakers in approving the use of insect-based protein in animal feed in Kenya.

The future of fly feed

When thinking about the future of BSF, many in the Kenyan space look excitedly at Rwanda. With a more organized system for collecting waste, a warm climate, similarly friendly regulations and particularly pricey feed, it’s where Stanford has recently opted to relocate.

She hopes others join her in taking advantage of the opportunities offered by the industry. “What we need is just more people to get into BSF,” Stanford stresses. “I actually don’t have competition—there’s enough organic waste in the world to do this everywhere, and the demand for animal feed is so high that there’s enough room for everyone to do this.”

Tanga is working to establish a BSF Association to encourage farmers to learn from each other and make it easier to enter the space. He says his research suggests demand far exceeds the current volume being produced, with more than 80% of farmers willing to switch from fishmeal and soy over to BSF if given the choice.

As the sale of AgriProtein’s Cape Town factory appears to mark the firm’s departure from the continent, it could be the smaller, nimbler enterprises in east Africa that are the ones worth watching.

“I don’t know anyone who has entered this industry and left it – I think you fall in love with it,” says Stanford. “People get excited once they get over the whole idea of a maggot.”