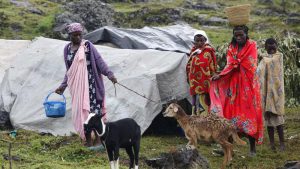 London, UK, June 22, 2020//-A coalition of international, national, and refugee-led organizations in the Horn, East and Central Africa (HECA) have called on governments in the region to reopen borders for asylum seekers.

The organizations are calling on governments to put in place measures that manage the current health emergency while ensuring asylum seekers can seek protection.

Countries in the HECA region host approximately 4.6 million refugees and asylum seekers and have a long history of receiving asylum seekers and providing them with protection. Before the pandemic, the countries continuously received new people seeking safety and protection from violence and conflict, political persecution, or other threats to their lives.

States started closing their borders in March as a public health measure to contain the transnational spread of COVID-19, without safeguards for the many women, men and children fleeing threats to their lives and freedoms and needing to seek asylum.

“While countries in the region are faced with a genuine public health emergency, governments, with support from international partners, must find solutions that respect international human rights and refugee law commitments, including the right to seek asylum.

Burundi, Ethiopia, Rwanda, and Somalia closed their borders in March 2020. In Kenya, the borders with Somalia and Tanzania closed on 16 May. Asylum seekers and refugees who cross into Kenya are sometimes arrested and returned to the border point of entry.

Blanket border closures contravene international refugee law by denying people in need of international protection an effective opportunity to seek asylum. They also violate the principle of non-refoulement, which prohibits states from turning away people at a border and returning them to a country where they would be at risk of persecution or danger.

Along the DRC-Uganda border, approximately 10,000 displaced people have been camped out since May, waiting to seek asylum in Uganda. Following a 16 June decision by the Uganda government to allow them to enter the country, efforts are underway to prepare for their safe entry, quarantine, and settlement.

“We welcome Uganda’s decision to receive this specific group of Congolese asylum seekers. We urge the government and partners to ensure quarantine conditions for this group are dignified, and to develop more general measures to admit people needing international protection at other border points,” said Robert Hakiza, Coordinator of the Global Refugee-Led Network-Africa Chapter.

On Uganda’s border with South Sudan, for example, hundreds of people displaced by recent fighting between government soldiers and armed groups in Central Equatoria State are stuck, hoping to cross into Uganda.

They are living in makeshift structures and are in urgent need of food, proper shelter, medical care, and access to clean water. Uganda closed its borders on 20 March.

“Regional bodies such as the East African Community (EAC), the Intergovernmental Authority on Development (IGAD) and the African Union (AU) should provide more leadership and guidance on how countries can safely open their borders to asylum seekers.

The international community must also step in to provide the needed assistance to displaced persons, whichever the side of the border they are on,” said Lydia Zigomo, Oxfam’s Regional Director in the Horn, East and Central Africa.

The organizations are calling on regional bodies to help and encourage governments develop procedures and policies that would allow movement across borders for individuals wanting to seek asylum.

This should include workable protocols for COVID-19 screening, testing and quarantine, and special measures that address the needs of marginalized groups, such as unaccompanied children, particularly in quarantine facilities.

“While the EAC has been instrumental in supporting harmonized border screenings to allow the movement of cargo across the region, they have been silent about access to asylum-seekers.

Regional bodies must not leave refugees out of their COVID-19 response plans,” said George Kegoro, Executive Director of the Kenya Human Rights Commission.