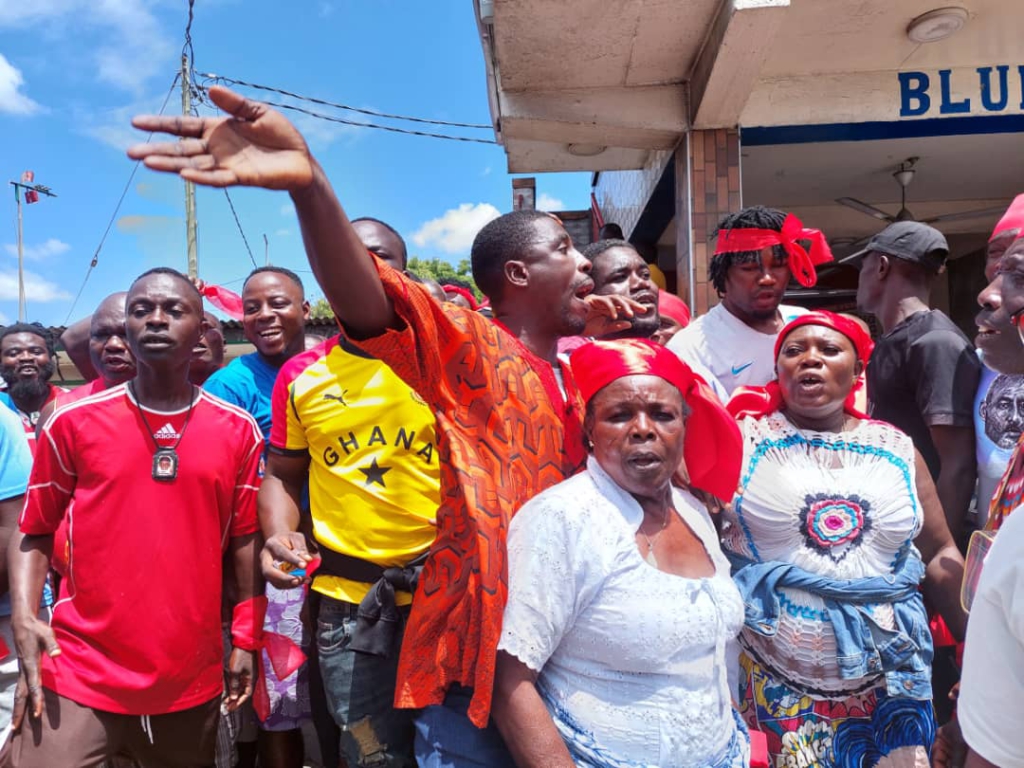 Accra, Ghana//-The youth of Odododiodoo, one of three constituencies that constitute the Accra Metropolitan Assembly (AMA) in the Greater Accra Region, are protesting the alleged removal of the current Mayor of Accra from office.

This follows reports that Mohammed Nii Adjei Sowah, will be replaced by Elizabeth Sackey, the former Deputy Minister of the Greater Accra Region in the soon to be announced MMDCEs list.

“As a group, our interest is not to question or rundown the competencies of the other aspirants in this contest but it is proper to know who and what they are bringing to the table. We are not looking forward to an armchair Mayor or one that will only be a puppet and to succumb to the whims and caprices of some selfish party elders within Greater Accra Region.

“We want a leader who will be at the beck and call for all manner of persons irrespective of the party coloring,” part of a statement released by the group and sighted by JoyNews reads.

On Thursday, the Director of Communications at the Presidency, Eugene Arhin announced that President Akufo-Addo had submitted the list of nominated Metropolitan, Municipal and District Chief Executives (MMDCEs) to the Minister of Local Government and Regional Reorganisation, Dan Botwe.

The release of the information led to speculations that the names of some 37 women are part of the list.

Notable persons like Elizabeth Sackey, and Catherine Reckling, the District Chief Executive for Sekyere South in the Ashanti Region are alleged to be on the list.

But reacting to the rumours, the Concerned Youth of Odododiodoo argued that the current Mayor of the Accra Metropolitan Assembly would best fit the portfolio and can serve the President’s vision of Accra and that of the people.

According to them, this assertion is based on the successes Mohammed Nii Adjei Sowah has chalked over the years.

“As a true grassroot and a loyalist of the Danquah-Busia-Dombo tradition, Mohammed Nii Adjei Sowah delivered Greater Accra against all odds by winning 21 seats as Regional Secretary in the 2016 elections. A portfolio he had held for two terms running. His appointment and having received a 100% confirmation on 24th March, 2017 didn’t come as a fluke.

“Adjei Sowah has always prioritized sanitation which has long been an issue in Accra, at the nexus of public safety, public health, the informal economy (which employs about 75 percent of Accra’s residents), and emissions contributing to climate change. He’s constantly emphasized inclusivity and equity which remains as his core work.”

Again, under the ambit of Mohammed Nii Adjei, the three constituencies under the Accra Metropolitan Assembly can now boast of newly built constituency offices which have been commissioned and currently in use in the enhancement of activities of the NPP.

“The periods of renting constituency offices in these three constituencies are now a thing of the past.

“We strongly admire the tactful contributions during the just ended 2020 election. In spite of his ill health during that period, he never reneged on sitting at the table to draw strategies and to show the way during the electioneering period. Indeed, Mohammed Nii Adjei Sowah is a masterpiece and we are fortunate to have him,” the group stressed.

Meanwhile, leadership of the NPP are urging members to remain calm and respect President Akufo-Addo’s nominees.

At a press conference in Accra on Friday, September 17 2021, the Director of Communications of the NPP, Yaw Buaben Asamoa, acknowledged the fact that, not every person will have his or her preferred candidate nominated, but asked members to welcome the President’s decision.

“We urge everybody to be calm and to act in ways that promote good relations at a working level in order to give the nominees the best possible opportunity to work in the interest of the grassroots of the nation,” he stated.