October 19, 2017//-China’s economy grew 6.8% between July and September according to official data released Thursday, slowing slightly from the prior quarter.

The growth rate, which compares expansion with the same three months in the previous year, met forecasts.

The latest GDP figures are still above Beijing’s annual growth target of 6.5% for 2017.

The world’s second largest economy is trying to rein in debt and contain a housing bubble without hurting growth.

Those efforts are expected to have weighed on economic activity in some parts of China, but growth has been supported by higher-than-expected rise in trade and bank lending.

The result followed growth of 6.9% in the first and second quarters of the year.

The figures come as China holds its Communist Party congress to determine the country’s direction for the next term.

President Xi Jinping said the country will deepen economic and financial reforms and further open its markets to foreign investors, amid disappointment from some foreign executives and analysts about the pace of reform.

“China’s economy has been transitioning from a phase of rapid growth to a stage of high-quality development,” Mr Xi said when he opened the congress on Wednesday.

The country wants to wean its dependence away from export-led growth and toward domestic consumption.

Since the global financial crisis, China’s economic growth has slowed, from an average of 10% a year in the previous three decades to a rate of 6.7% last year.

Some are slightly more optimistic about the path ahead. The country’s central bank governor said earlier this week that China’s economy could grow 7% in the second half of this year, while emphasising that more needed to be done to reduce the risks from a rapid build-up in debt.

Other data providing insight on the health of China’s economy was also released on Thursday.

Retail sales rose 10.3% in September from a year earlier, edging down slightly from analysts’ expectations for a 10.2% rise.

China’s factory output grew 6.6% in September from a year earlier, beating expectations, while fixed investment disappointed with a 7.5% expansion in the first nine months of the year. BBC 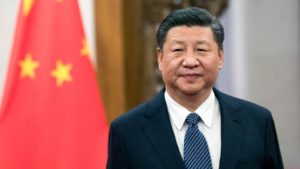