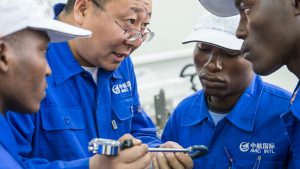 June 28, 2017//- China is Africa’s largest economic partner. Yet it has been a challenge to understand the full extent of the partnership due to a dearth of data.

A new report by McKinsey Africa, a leading management consultancy firm in Africa finds that its involvement is bigger and more multifaceted than previous studies suggest.

Through a study conducted across eight countries that together make up about two-thirds of Sub-Saharan Africa’s GDP, the report finds that there are already over 10,000 Chinese firms operating in Africa—four times the previous estimate.

About 90 percent of these are private firms, of all sizes and operating in diverse sectors, with about a third in manufacturing. These firms are bringing capital investment, management know-how and entrepreneurial energy to the continent, and in so doing, are helping to accelerate the progress of Africa’s economies.

Across trade, investment, infrastructure, financing and aid, China is a top five partner to Africa—no other country matches this level of engagement. The China-Africa relationship has ramped up over the past decade with trade growing at around 20 percent per annum.

FDI has grown even faster—at an annual growth rate of 40 percent. China’s financial flows to Africa are 15 percent larger than official figures suggest when nontraditional flows are included. China is also a large and fast-growing source of aid and the largest source of infrastructure financing, supporting many of Africa’s most ambitious infrastructure developments in recent years.

Chinese firms are market-driven and investing for the long-term

Operating across many sectors of the African economy, in addition to manufacturing, a quarter is in services and a fifth in trade and in construction and real estate. Chinese firms already handle 12% of Africa’s industrial production—valued at $500 billion a year in total.

Nearly a quarter of the 1000 firms surveyed said they covered their initial investment within a year or less. A third recorded profit margins of over 20 percent. These firms are agile and quick to respond to new opportunities.

They are primarily focused on serving the needs of Africa’s fast-growing markets rather than on exports. Chinese firms have made investments that represent a long-term commitment to Africa. Of the Chinese firms surveyed, 74 percent said that they are optimistic about their future in Africa.

Clear benefits, but challenges must be addressed

The report points to three main economic benefits to Africa from Chinese investment and business activity:

While on balance, China’s burgeoning partnership with Africa is a positive for Africa’s economies, governments and workers, there are areas that need significant improvement:

Maximising the impact of the partnership

Kartik Jayaram, a senior partner and co-author of the report said, “Chinese engagement with Africa is set to accelerate—by 2025 Chinese firms could be earning revenues worth $440 billion, from $180 billion today. Additional industries could be in play for Chinese investment, including technology, housing, agriculture, financial services and transport and logistics.

However, to unlock the full potential of the China-Africa partnership, we have identified 10 recommendations for Chinese and African governments as well as the private sector. To highlight two key ones—African goverments should have a China strategy and the Chinese government should open financing and provide guidance to Chinese firms.”

a senior partner and co-author of the report s, Kartik Jayaram, McKinsey Africa