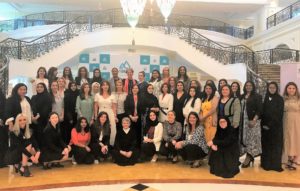 When the COVID-19 pandemic hit, Farida Mercedes, an HR executive at a global cosmetic company, was on the cusp of a promotion. She had worked 17 years with the company.

Her six- and seven-year-old sons needed a full-time parent to help them navigate the newfound challenges of online learning. Mercedes and her husband, a corrections officer, never discussed who would leave their job to help the kids during their school day. “I took that burden on myself, and he was very supportive,” she said. “But it just was no question.”

Mercedes is one of the 2.3 million women who left the US workforce in 2020. In the first 12 months of the pandemic, women accounted for 53 percent of US labor-force exits. And the April 2021 job report from the US Bureau of Labor Statistics revealed a concerning trend: of the 328,000 American jobs gained that month, 102 percent of net job gains belonged to men.

The COVID-19 crisis has especially magnified the disproportionate challenges facing Black and Latina women in the United States. Nearly one in 11 Latina women in the country (8.8 percent) were unemployed as of January 2021; the group had the highest unemployment rate.2 More than one in 12 Black women (8.5 percent) in the United States were unemployed.

Employer-offered flexibility, such as reduced hours and a shifted work schedule, doesn’t necessarily preclude women from balancing a double shift of full-time childcare and employment.

That is particularly true for mothers who are the primary or sole breadwinner of their families, a group that represents up to 68 percent of Black families and 41 percent of Latino families.

Women who cut back their paid-work hours to accommodate family responsibility risk losing wages, benefits, and opportunities for advancement, not to mention sleep. Taking a temporary leave of absence can also set women back. Studies have shown that women who take a year off from work after giving birth earn less than women who don’t.

What choices do working mothers face during the pandemic? And how do cultural norms, workplace policies, and socioeconomic factors affect those choices?

To gain insight into those important questions, McKinsey spoke with Mercedes and Dr. Victoria DeFrancesco Soto, a political scientist at the University of Texas at Austin, mother of two, and coauthor of the report America’s recovery from the 2020 ‘shecession’: Building a female future of childcare and work.

The following is an edited excerpt of the conversation.

McKinsey: Dr. DeFrancesco Soto, you call the current economic downturn a “shecession.” Can you explain?

Victoria DeFrancesco Soto: Traditionally, recessions hit men the hardest, but this was the first shecession—where we saw this proportion of impact on women. Men are gaining employment, from the latest job numbers—not a whole bunch, but they’re gaining—while we’re losing.

McKinsey: Farida, when did you realize you couldn’t continue to work full-time while supporting your kids through virtual school?

Farida Mercedes: At the beginning of the summer, I knew I was struggling. There were a lot of things happening. The Black Lives Matter movement was happening, as well as the pandemic.

I remember the moment like it was yesterday. I came downstairs, and my mom was there. And she made a joke about something, and I started laughing. My son looked at me and said, “Wow, Mommy, I haven’t seen you laugh in a really long time.

You look happy.” My mom and I looked at each other and I said, “I need to do something. I’m not showing up for them. They’re not seeing a happy mom.”

It took three weeks from that moment until the moment I was able to speak the words to my employer: I was leaving. I contemplated and questioned. Am I making the right decision? Are we able to financially do this?

My job was a part of my identity. Everything that I had known and worked for … I felt like it was going to be completely taken away or going to stop. And who was I going to be?

My job was a part of my identity. Everything that I had known and worked for, the levels that I had risen, everything that I had accomplished, I felt like it was going to be completely taken away or going to stop. And who was I going to be? Now, four months in, I still question it sometimes. I know that I made the right decision, but I questioned myself.

I feel lost. I miss being an influencer at work and having these robust conversations. Now I am talking to my second grader about, “Did you do that reading assignment?” or to my kindergartener, “Did you make sure that you colored in your ocean for your story?”

McKinsey: Do cultural norms put more pressure on women to leave the workforce than men?

Farida Mercedes: I believe women have never really had the support that men have had in the workforce. I grew up in a very traditional Latin American culture, but I find myself to be very progressive.

I was taught from a very young age that you never depend on a man. Get your own job; work on a career. It was very important to me. And that’s why leaving my role of 17 years was very, very difficult.

Now, being with my kids every day when they’re in class on Zoom, I realize that there was no way that I could do the job that I was doing and support them. And my husband never had that role.

I’ve always done the things for school, for the doctors, and things like that [exhibit]. So it just wasn’t a conversation. It was, “You’re going to make that decision; if that’s something that we need to do so that we can support the kids, that will be you.”

Victoria DeFrancesco Soto: Anecdotally, as a mom with kids, I can speak to it in terms of a cultural assumption. And I might add that I’m Latina. In Latin American culture, there are stricter kinds of gender norms.

Combine the fact that Latinas are the ones who have been hardest hit by the shecession with the fact that you have these gender norms, and it’s really a recipe for disaster for women and women of color. So I think it’s important in all of these conversations to bring in that lens of culture, race, and diversity.

McKinsey: Do you think the rate of women leaving the workforce will continue to rise?

Victoria DeFrancesco Soto: I do. I wrote a report [America’s recovery from the 2020 ‘shecession’: Building a female future of childcare and work] for YWCA over the summer.

I agreed to do it in June, with no childcare, right? So I would wake up at 4:00 a.m. to get one-and-a-half to two hours of uninterrupted work. I’ve always been an early riser, and I can push myself. But I got to the point where I thought I had COVID-19, even though I didn’t, because I was so exhausted and so rundown.

Until things are back to normal, you’re going to see women break because it’s an unsustainable pace.

McKinsey: What are the implications of women leaving the workforce at a higher rate than men?

Victoria DeFrancesco Soto: For women, the implications depend on their SES [socioeconomic status] and skills. Because we know that job advancement is based on your trajectory. And whenever you have gaps, that’s when the spiral can start.

Seeing the job numbers from December, combined with some of the commentary we are seeing about no end in sight for the job losses of women, it’s a spiral. That’s the one word that comes to mind. Because for those women who are able to go back, they’re not going to be able to advance to the degree they would have before.

For women who were in the service industry and have a lower SES, I’m worried that they may not get employed again. Because when we look at the intersection of the pandemic with automation, we see that a lot of these jobs were already on the chopping block.

Unless we have a robust reskilling and retooling program that’s put forward, I’m really worried that a chunk of lower-SES women may not be able to find stable employment again.

This is going to have long-term implications. It’s not just about right now or the next quarter or the next set of quarters. This is about a decade or two.

McKinsey: What do you see as the future cost, both to the economy and for families, of this many women leaving the workforce?

Victoria DeFrancesco Soto: It will be costly and expensive on so many fronts. First of all, there’s the paychecks—the lost revenue. I think that is front and center. But I think one thing that’s also very important to think about is the long-term losses and benefits.

So that means that how we planned to retire—whether we’d been paying into our Social Security or paying into our 401(k) or a 403(b)—[is going to change]. We’re just simply not going to have that. I think it’s important for folks to realize that women are really feeling the pain now, but ultimately, this is hurting us at a macro level as well.

They were already in a very tenuous position, both in terms of income and access to resources. And this has potentially sent them back to a place where they may never recover.

McKinsey: What interventions can help support families so that they can return to the workforce at equal rates as men?

Victoria DeFrancesco Soto: Our childcare system was broken to begin with, in terms of how much we pay for childcare and the availability of childcare before COVID-19. It is falling apart. So I think that a drastic overhaul, something approximating universal childcare, is necessary, in addition to maternity leave. That all goes together.

I also think that we need job training for our lower-SES women. Retooling them and retraining is an investment that needs to be made.

McKinsey: And is this something that is unique to the United States, this lack of social-support systems for women?

Victoria DeFrancesco Soto: Yes. And it’s embarrassing. You look at all of our OECD counterparts, and we’re always at the bottom of the stack in terms of our childcare provisions and in terms of our maternity-leave policies. [The United States ranks 37th out of 39 OECD countries for spending on early-childhood education and care.5 Childcare costs up to 25 percent of a two-parent family’s income and up to 50 percent of a single-parent family’s income.]

Farida Mercedes: You hit it right on the nose. It’s going to be harder than ever to get back into the workforce, even for myself. If I’m out for one year, what does that mean when I go back? Do I start from scratch again?

Am I still considered at the role and position that I was in before? Do I just walk back in as an assistant vice president? What does that mean when we do make the decision to go back? And how, as a country and a workforce, are we supporting women like myself to get back in?

This interview was conducted by Kweilin Ellingrud, a senior partner in McKinsey’s Minneapolis office. This piece was edited by Astrid Sandoval, an executive editor in McKinsey’s London office.