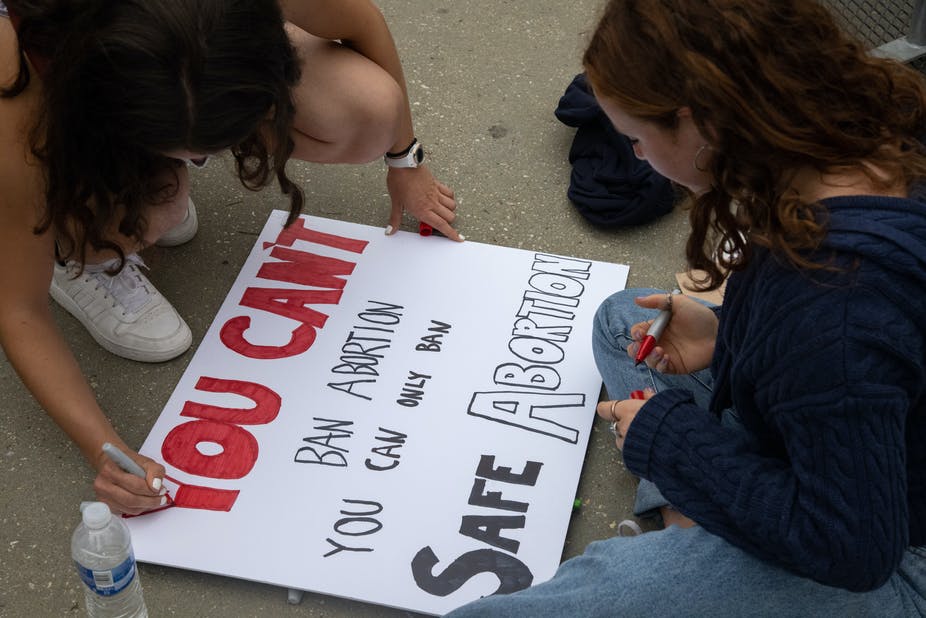 A leaked draft of a majority opinion of the US Supreme Court has revealed the court’s leaning towards undoing its 1973 landmark ruling (Roe v Wade) which gave women in the US a constitutional right to abortion.

The leaked document is not the court’s final decision – this is expected in a couple of months. But reproductive health experts are warning that it could threaten women’s rights around the world. The Conversation Africa’s Ina Skosana spoke to reproductive health researcher Sara Casey about how women in Africa could be affected by US policy decisions.

1. What is Roe v Wade? What’s its significance in relation to abortion rights?

Roe v Wade is the landmark United States Supreme Court decision that gave women a constitutional right to abortion. That decision means that pregnant people living in the US can obtain an abortion on request, subject to some restrictions. Individual states can introduce restrictions on that access, but cannot ban abortion.

The leaked US Supreme Court opinion that could overturn Roe means that each US state can make its own laws regarding whether or not abortion should be permitted, and under what circumstances.

If the ruling striking down Roe is eventually issued, 26 US states, where 58 million women live, will certainly or probably ban abortion. Only 16 states have laws protecting the right to abortion. Millions of people living in the US will lose access to safe abortion care.

Those who are poor, young, black, undocumented or have experienced intimate partner violence will be most affected. They are most likely to have an unintended pregnancy, are more likely to die due to pregnancy or its complications, and have least access to sexual and reproductive health services.

The World Health Organisation (WHO) and other international bodies recognise that abortion access is linked to human rights. Banning abortion does not reduce the number of abortions.

This decision would make the US an outlier in the world.

Over the past 25 years, countries around the world have moved towards liberalisation of their abortion laws. In 2003, the African Union adopted the Protocol to the African Charter on Human and Peoples’ Rights on the Rights of Women in Africa (commonly known as the Maputo protocol). It explicitly recognises abortion as a human right in cases of rape, incest and foetal impairment and to preserve the mental or physical health or life of the woman.

2. What, if any, is the implication for women in African countries?

Anti-abortion ideology in the US has already affected US foreign policy, and disrupted access to sexual and reproductive health services in Africa and globally.

The US in the largest bilateral funder for sexual and reproductive health. Countries that rely heavily on foreign aid to fund their health system look to donor countries for guidance. It is likely that countries may use the US abortion ban to further restrict abortion access out of fear that the US global health assistance on which they depend may be reduced.

This happened under the Global Gag Rule, which was in place under the Trump administration (and every Republican administration since 1984). The rule required non-governmental organisations based outside the US that received US government global health assistance to certify that they would not use any funding to provide legal abortion services, referrals, or information to clients, or to advocate for the liberalisation of a country’s abortion law.

Despite its intention, research has shown that this policy has resulted in increased abortions and decreased contraceptive use in sub-Saharan Africa and Latin America and the Caribbean.

Research we conducted provided evidence of the devastating impact of the Global Gag Rule in Kenya and Madagascar on integration of health services, health facility closures, disrupted referral networks and weakened advocacy efforts. In our studies, we found evidence of a chilling effect of the rule where organisations tended to over-interpret it out of fear of losing US funding.

Stakeholders in Malawi, Senegal and several other countries reported that national policymakers look to US abortion politics as rationale for restricting abortion access.

In addition, the religious right in the US has emboldened local and regional anti-choice movements, particularly in Kenya. The US anti-choice movement’s success with the Supreme Court will likely encourage and strengthen their efforts elsewhere, and threaten local progress in advancing sexual and reproductive health and rights.

Women and adolescents who find themselves with an unintended pregnancy, particularly those who already face structural inequalities, will be most affected.

3. Why does a decision in a US court have a bearing on women in Africa?

This decision should not affect women in Africa. For the reasons described above, though, it may in fact do so.

It is, however, important to note that abortion is still legal in the US and clinics are still open. This is a draft opinion, not yet a ruling. The Global Gag Rule is not currently in effect, so NGO funding is not subject to those restrictions on their funds.