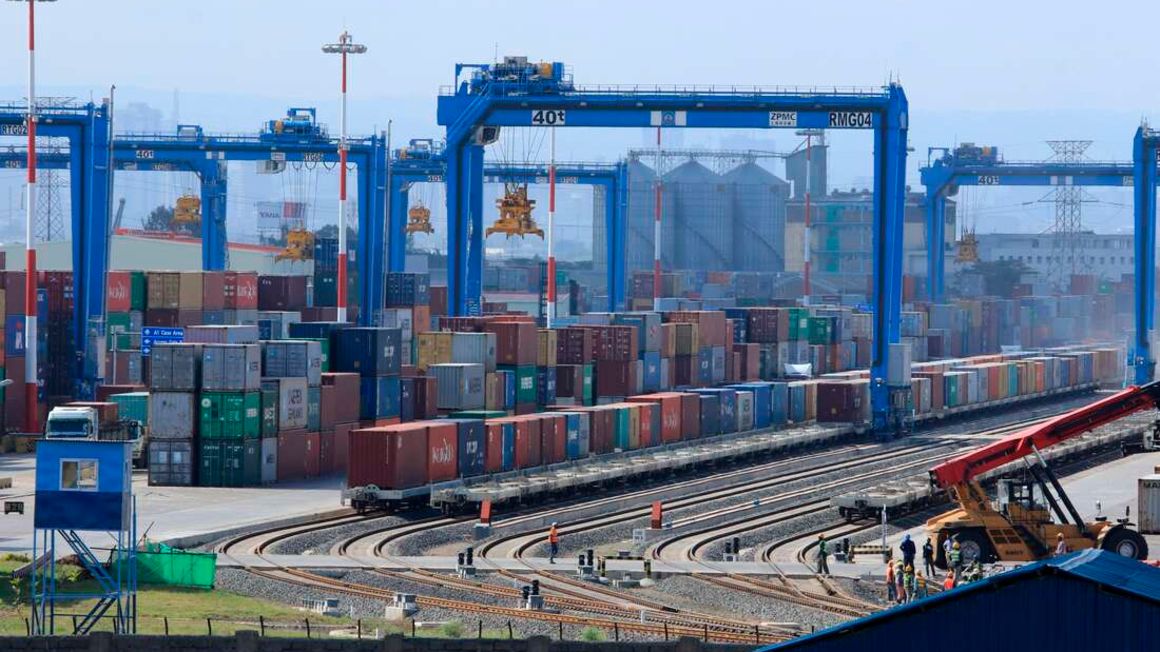 Accra, Ghana//-From January 2020 to April 2021, the volumes of cargo that have been through Chinese ports were almost 19.5 billion tonnes.

Within the same period, the container throughput stands at over 350 million 20FT container equivalent units.

Since the pandemic, China has been recovering faster than many other countries, with their export figures rebounding spectacularly after the first half of 2020. Western countries started buying large volumes of products from China, especially the United States of America. So, huge volumes of shipping containers had to leave Chinese ports.

Cargoes for ocean freight are transported in metal containers. When these shipping containers are delivered to the port of destination, they usually circle back to the port of loading, albeit many make a few stops along the way when required. When it gets back to the original port, the process repeats itself.

That has not been happening. It is because China is currently shipping way more to the US, Europe and the rest of the world than it is importing. China has been moving a lot of shipping containers to their biggest markets and these containers do not circle back to facilitate other exports.

Millions of shipping containers were stranded at many locations around the world when the pandemic started. Congested ports also did not have the needed manpower to process customs procedures in a fast manner. These hampered global container circulation.

The story is not the same in most parts in the world. A shortage in this instance means shipping containers are congested somewhere, concentrated elsewhere, not repurposed or out of commission.

A few months back, Bloomberg reported on a massive backlog of 28 container ships that were waiting to enter just the US ports of Long Beach California and Los Angeles.

An additional 16 ships full of containers were expected to arrive over the following three days. A week before that, it was 26 container ships. Reports from officials monitoring marine traffic in San Pedro Bay indicated it was less than the 40 container backlog peak back in February 2021.

Also, back in March 2021, one of the world’s largest container vessels, a 400m-long 200,000-tonne ship called The Ever Given, got stuck in the Suez Canal and frustrated the entire global shipping industry. About 12% of global trade use the canal daily. So it’s understandable how and why it became such a big deal.

The Ever Given got stuck after it run aground and wedged sideways across the canal, blocking passage for other ships.

There were over 360 ships that were waiting on either sides of the canal to cross during this blockade. This contributed to the current shortage of containers globally. It made worse an already ailing world container circulation.

During the second half of 2020, ecommerce traffic exploded all over the world. Amazon profits have soared past 200% since this pandemic begun.

China represents a very large volume of suppliers for ecommerce websites and China is currently shipping more to the US and Europe than it is importing.

You’d have to also factor in the fact that over the last few decades, there has been a lot of outsourcing to China. So already, China has been exporting massively to many parts of the world.

This global container shortage situation has been a problem waiting to happen only very much exacerbated by the current COVID pandemic.

Heavy competition for available containers has sent shipping rates through the roof. The whole situation looks dreadful when you factor in the current limited air freight capacity since the pandemic started. The airline industry has been dealt a heavy blow with record low number of flights.

In the West, retail purchasing has shifted to primarily ecommerce because of lockdowns and other COVID-related restrictions. As earlier stated, China is exporting more to the West than vice versa and most of these shipping containers are not circling back. Compared to Q1 2020, freight rates have gone up by as much as 300% from China to the USA.

That shipping cost surge must be borne by someone: the consumer.

Remember, extra shipping costs must be borne by someone.

E-commercehas picked up in Ghana at a fast and impressive pace. The brief lockdown we experienced also accelerated this. Yet, it’s still not mainstream to use an app or a website to order for broiler (frozen chicken product) for cooking. The fact still remains that a large volume of what we consume as citizens are imported.

Because China is facing a challenge with container circulation, any country that depends on Chinese exports will be affected. It’s safe to say then that it is why seemingly every country in the world is affected by this inadequate container circulation, including Ghana and where we get our imports. Think electronics; think automobile spare parts; think household items, etc.

What’s happening is that there’s so much cargo waiting to be loaded onto shipping vessels, and the ships are ready,but shipping containers are scarce because of all the above-mentioned.

The higher the demand, the more visible the variance

Let’s take frozen poultry products. Almost everybody eats chicken, generally speaking. The sale price of one carton of chicken leg quarters (broiler) has increased from GH¢97 as at two weeks ago, to GH¢115 this week. It looks like it’ll go up a bit next week as well. I know because I checked.

All this is because freight rates and other delivery costs to Ghana have gone up just as with other places in the world due to the limited availability of shipping containers. Importers are not carrying these extra costs for you.

That shipping cost surge must be borne by someone. If you’ve bought a broiler recently, you just took that added cost.

Frozen products face a particular challenge because about 10% of the world’s shipping containers are refrigerated, what they call “reefers”.

Reefers are meant to transport perishable products like seafood and poultry. While all of freight is affected, it’s easy to see why freight involving reefers face a more acute challenge.

All this will stop when trade flows smoothen out.The problem is, COVID seems to be resurging. So normalcy in this respect in 2021 does not look likely when you take into consideration the recent spikes in cases in many places in the world.Then there’s new COVID variants that keep popping up.

It wasn’t raining when Noah built the ark

Those that prepared for a day when consumers do not need to enter brick-and-mortar stores for shopping items have literally made billions of dollars and made their co-participants and other stakeholders millions and billions of dollars. #Amazon

So I’ve been talking about solutions. “Emergency preparedness is a team sport.” Eric Whitaker said that. There have been two occasions where I’ve held discussions (in passing) on the limited availability of shipping containers. From how they’re addressing challenges, I’ve thought “yeah this could work really well”.

I had an interesting conversation with one company the other day, Innovative Distribution Solutions (IDS). They had an innovative approach to the shocks that Ghanaian supply chains are suffering because of COVID.

IDS has created an app where, in a world moving further away from brick-and-mortar, one can create and sell products on a small scale or on a large scale, all from the convenience of your mobile phone, anywhere in the world.

A lot of competitors are in the eMarket space. What makes IDS stand out to me, is the extensive warehousing and cold store infrastructure for frozen products well positioned across the country.

Remember when I said consumers in Ghana are not accustomed to buying broilers from a phone or a laptop? IDS makes that possible with an app that is populated with an impressive and growing number of wholesalers, retailers, and even a good number of insulated aboboya’s that make frozen product deliveries right to your doorstep.

In effect, you candirect delivery of your dry stock into an IDS warehouse, or delivery of your frozen products into an IDS cold store, and once your eStore on the IDS app is loaded with your very own stock, that’s it: you can sell without ever handling a single one of your products because IDS supports dry and wet last-mile deliveries as well.

The other conversation I had was with MNE Shipping. The way they explain their project, they make me think of supply chain as the ‘different stages of things’. Because a thing in overseas doesn’t just land in Ghana. It passes through many stages.

They’ve broken it all down into many stages and have taken a critical look into how tomake the operations of each stage very efficient, by improving value for money. There’s a difference between lowering delivery costs and increasing value for money.Still, the two are not mutually exclusive.

Traditional shipping lines had one main objective: to deliver your product at the lowest cost. So over the years, the ships got bigger and bigger. That made them slower and slower.

And by their sheer volume of containers per vessel, they made multiple stops along the way to Ghana. The result of this is that delivery cost per unit gets reduced, but delivery time got way too long.

What MNE Shipping understands very well is the concept of working capital, of you, the shipper. When you have ordered products from overseas to Ghana while it is on this traditionally slow ship, that’s your working capital locked up right there.

That’s your money sitting on someone’s big ship, not earning you a single cedi or pesewa. Even if you really needed it, you can’t send a helicopter for it because it’s probably under a thousand containers far out at sea. So that’s a real problem.

MNE Shipping believes that the shipping industry should be speeding up shipments, not slowing it down.

Traditional shipping companies got carried away by their unit economy calculations with their super mega ships. But they didn’t account for the law of unintended consequences elsewhere in the Ghana man’s pocket.

If you have two months of inventory on your books as opposed to one month, your balance sheet will be bigger but at what cost.

What’s the true cost of capital? There is a cost of having your working capital in the form of cargo sitting on someone’s slow ship for four to six weeks.

Their solution: to utilise medium-sized shipping vessels that are fast and singularly headed directly for Ghana. So, delivery periods becomes shorter and the economies of scale still do kick in because each delivery by sea from MNE is a shipload nonetheless.

I believe they hit that critical clientele mass that allows them to do regular shiploads with ease. All this is towards reducing that delivery cost per SKU (Stock Keeping Unit) from an overseas factory to your doorstep.

In a pandemic, this is innovation.

Container shortages have changed the working dynamics of many trading companies since COVID. As many economies recover, things will only get worse (and then better) because global demand for shipping services will go higher. The global shortage of shipping containers will persist for a much longer while then we’d like.

Necessity is the mother of invention. What are you doing differently?

He is an Agro-Commodities Traderand the CEO of Maxwell Investments Group.

He is also the Official Business Advisor to Ghana’s General Agricultural Workers Union (GAWU) of TUC Ghana, the largest agricultural trade union in Ghana. He writes about trending and relevant economic topics, and general perspective pieces.