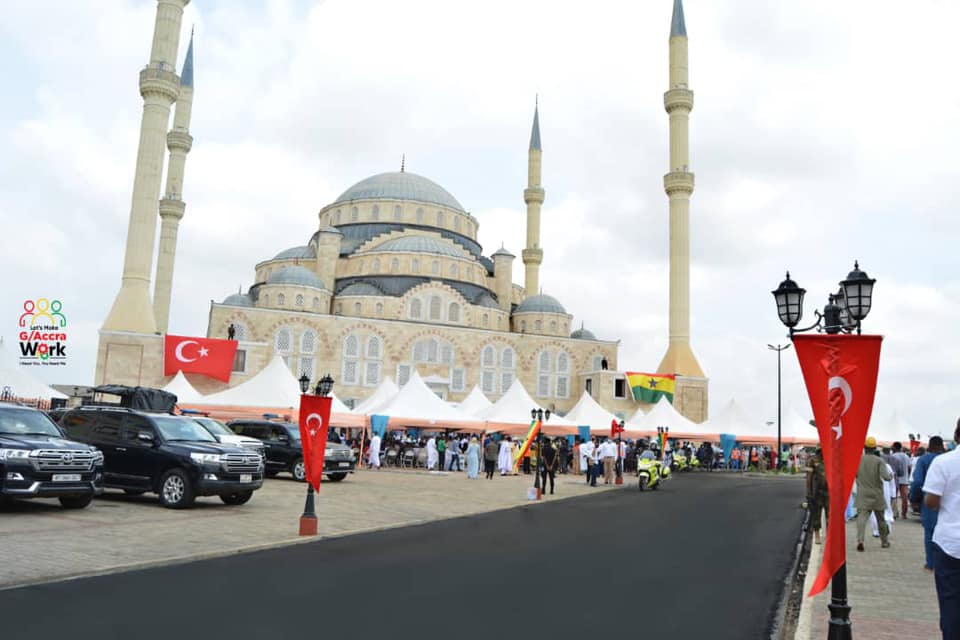 Accra, Ghana//-Ghana National Mosque Complex, the second largest in West Africa, and situated on a 42-acre land at Kanda, a suburb of Accra , has been commissioned and opened to the Muslims for worship.

The mosque which is estimated to cost $10 million was built by the Turkish Hudai Foundation in Accra with the support of the Turkish government.
The complex comprises a 15,000 seater-capacity mosque, a library, an office complex and residence for the Chief Imam, research complex, a senior high school complex, a clinic, an administration block, an auditorium, and a conference centre.
The mosque is replica of the Ottoman-era historical Sultan Ahmed Mosque, also known as the Blue Mosque, located in Istanbul, Turkey.
At a ceremony to officially open the grand mosque to the Muslim community in Ghana, President Nana Addo Dankwa Akufo-Addo said it was heartwarming that as a Christian majority country, symbol of Islam can beautifully adorn the landscape of the capital city.
To him, “it is not just the beauty it adds to the Accra skyline,” but the demonstration of the religious harmony that exist in Ghana, which continues to be the envy of the rest of the world.”
Emphasing the importance of the mosque in the theological aspect of Islam, the President noted that the mosque is not just a place of prayer, but a hub for social and cultural activity.
He stressed the invaluable role the complex would play in positively impacting the lives of the people in the Muslim communities in the country.
ALSO READ: https://africaneyereport.com/no-government-contributed-a-pesewa-to-building-of-ghana-national-mosque/
“In other words, a mosque is supposed to bring people together and not divide them,” he stated, urging the National Chief Imam and Muslim leaders in the country to use the occasion of the ceremony to further foster the unity of the Muslim community and the unity of the Ghanaian people.
President Akufo-Addo called also on the managers of the Mosque complex to take good care of the facility, and build its profile as a tourist destination for travelers and devotees of the faith.
He tasked the Tourism Minister to craft an appropriate strategy to make the edifice a place of pilgrimage and tourism.
The President thanked the government and people of Turkey for the sacrifice they had made to bring the National Mosque of Ghana project to fruition.
He was sure that the gesture would further deepen the strong bonds of cooperation and friendship between the two nations.
“You have indeed honoured our country with such a magnificent edifice. In the days to come, this edificie will serve as a historical reference point in Ghana-Turkey relationship,” he said.
The mosque complex will serve the Ghanaian people and their visitors from across the world, as a mosque, a scientific institution, as well as a health and social services centre.
The event was witnessed also by the President of Niger, Mohamed Bazoum, Vice President Dr Mahamudu Bawumia, the immediate former president of Niger Mahamadou Issoufou, Prof Ali Abass, President for the Directorate for Religious Affairs of the Republic of Turkey, the diplomatic community, and a host of dignitaries, including religious leaders and traditional rulers.African Eye Report/GNA