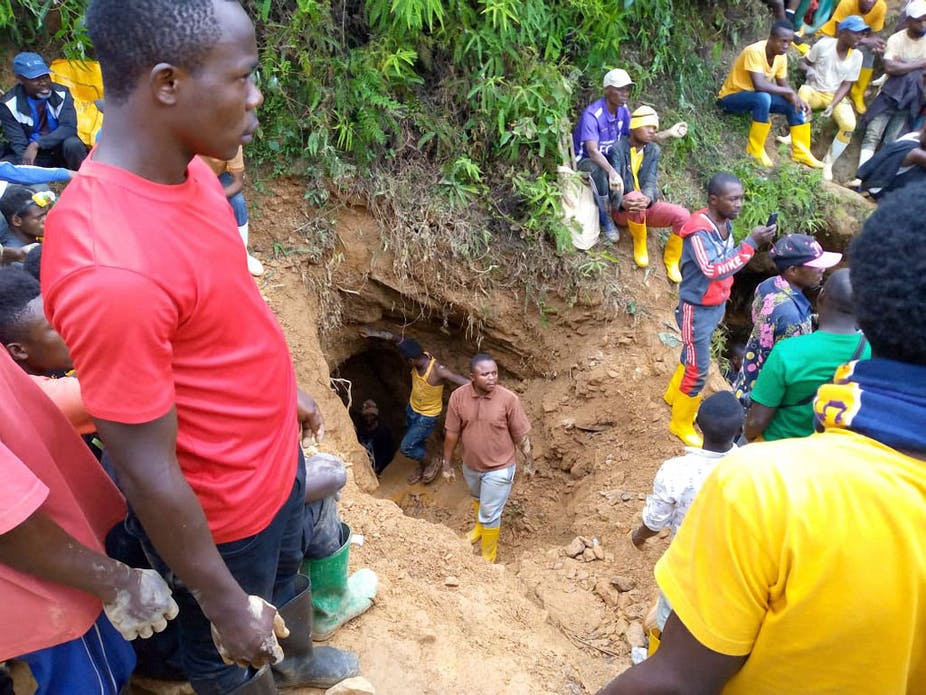 As a result, the continent’s mining industry has become dominated by transnational corporations such as Glencore, AngloAmerican and Barrick Gold.

Alongside these corporate giants, operating largely beyond the formal reach and control of African governments, sits the artisanal and small-scale mining sector.

This is defined by the OECD as mining operations with predominantly simplified forms of exploration, extraction, processing, and transportation.

Roughly one quarter of the global gold, tin and tantalum supply is produced by artisanal and small-scale miners. In 2019, there were an estimated 10 million people working in the sector across sub-Saharan Africa.

The mass privatisation of mining and the turn to foreign direct investment has created conflict with these miners. They have been displaced and marginalised. Displacement is often financed by corporations and carried out as government military-led ‘sweeps’.

The African mining literature (especially the more influential policy papers and flagship development agency reports) has been centrally preoccupied with how African firms can integrate into industrial mining value chains led by foreign corporates. It seldom considers how and from whom value is transferred when industrial mines interact with small-scale mining economies.

In our recently published research looking at the case of South Kivu province in the eastern Democratic Republic of Congo (DRC), we document these ‘everyday practices and struggles over value’.

We demonstrate how a coalition between foreign corporate capital and the Congolese state has held back local processes of adopting technology and forming capital.

We direct attention towards the important role played by small-scale mining in African societies and economies, and how transnational corporations hobble the potential of this sector.

Artisanal mining is the most important source of livelihood after agriculture in South Kivu. Nevertheless, transnational corporations have hoovered up the most valuable and strategically important deposits, forcing artisanal miners to more marginal and less productive areas.

Hundreds of thousands working in the province produce an estimated 4,800 kilograms of artisanal-mined gold annually. In 2020, this equated to a market value of around $265 million. The value of Congo’s total gold production is approximately $2 billion annually.

Artisanal miners extract gold from underground pits, alluvial sites and riverbeds. In Kamituga, South Kivu’s largest mining town, where we conducted our research, drillers and diggers go down in pits of up to 100 metres deep.

Outside the pits, the extracted ore is ground and processed using mercury amalgamation. The gold is sold to local traders, who in turn sell to master traders, who smuggle most of the gold production to neighbouring countries. It’s then taken to destinations such as Dubai.

Of the estimated $265 million in artisanal gold South Kivu produced in 2020, our research in Kamituga has shown that artisanal and small-scale Congolese miners and traders captured between 90% and 95% – $240 million to $250 million. This estimate is based on survey and financial logbook data collected from mine workers and managers in 2009-2010, 2015, 2016 and 2017.

The bottom category of mine workers, such as transporters and diggers, earn between $56 and $136 per month. Skilled workers such as timber workers, drillers and machine operators earn between $116 and $180 per month.

Technical directors and team leaders earn between $172 and $412 per month. Successful shaft managers can make a profit of between $764 and $1670 per month. Small traders make between $200 and $400 per month, while master traders make much more, up to several thousands of dollars per month.

Shaft managers and traders invest part of their profits in farming and livestock, real estate, commerce, transport, and non-mining productive activity (such as brick making). Managers and traders also import consumer goods, construction material and food into the country for resale.

They also reinvest in gold production, which drives investment in production technologies and mechanisation. As a result, artisanal mining in South Kivu has become more productive.

Around 2010, shaft managers noticed a decrease in the quality of the extracted ore in Kamituga. In response, they introduced machinery that grinds large rocks into fine powder.

Congolese managers and traders in Kamituga have driven a process of semi-mechanised gold mining, all of it based on locally made machinery. Their major problem, however, has been that they were working in an area under concession of the Canada-based multinational Banro Corporation.

Banro’s permits made any artisanal and small-scale mining on its grounds illegal. It initially tolerated this on its Kamituga concession, but its attitude changed when artisanal miners mechanised. Banro saw mechanisation as depleting the deposits on its concession far more rapidly than the traditional artisanal mining methods.

In response, in early 2013 Banro laid charges against owners of the grinding machinery in Kamituga. Eventually, their mills were appropriated by state agents with the support of local military and police.

By 2017, there was still no judgement on the case against the mill owners. The president of a miners’ association in Kamituga reflected that

Since 2012, artisanal miners have been leading a life of uncertainty. They continue in their work, not knowing what day their enemy will surprise them.

Banro has since gone into Canadian government creditor protection and the DRC has got a new president and South Kivu governor. These developments have shifted the balance of power away from foreign corporations.

But the breathing space for small miners might not last long. The Congo has a long history of the state and mining corporations working together to suppress artisanal and small-scale miners in South Kivu. This has happened across different political regimes since the 1970s.

The World Bank continues to promote the potential benefits of foreign-led industrial mining across Africa. Yet African governments are beginning to depart from this prescription and confront foreign mining corporations. This shift might represent an ideological break with the past, and the emergence of alternatives to a disruptive model.

This article was first published in an extended format on the Review of African Political Economy blog.