Minneapolis, Minnesota, USA, May 30, 2020// – The governor of Minnesota, where protests have erupted over police brutality and the death of George Floyd during the last week, has fully mobilised the National Guard to Minneapolis for the first time in state history.

Governor Tim Walz said the deployment comes as part of an effort to help quell the protests, which have often started off peaceful before descending into chaos, with fires and looting – violence he largely blamed on outsiders.

“We do not have the numbers,” Walz said. “We cannot arrest people when we are trying to hold ground.”

Minnesota National Guard General Jon Jensen said all the state’s guardsmen had been activated, and some 2,500 members were expected to be mobilised by midday. “It means we’re all in,” Jensen said.

It is the “largest domestic deployment in the Minnesota’s National Guard’s 164-year history,” the National Guard said on Twitter.

The deployment comes more than four days after the killing of George Floyd, which has set off angry protests across the United States against police brutality and the treatment of African Americans. Friday saw demonstrations and marches, sometimes violent, in Minneapolis, Louisville, Kentucky, Atlanta, Georgia, Houston, Texas, Washington, DC, and elsewhere.

Floyd died on Monday after Derek Chauvin, a white officer, pinned the Black man’s neck down to the ground with his knee for nearly nine minutes.

A bystander video of the incident shows Floyd pleading for help, repeatedly saying: “I can’t breathe.”
Floyd eventually goes motionless, and Chauvin continues to kneel on Floyd’s neck for nearly three minutes despite appeals by bystanders to get off of him, according to court documents.

The four officers involved, including Chauvin, were fired on Tuesday. Chauvin was arrested and charged with third-degree murder and manslaughter on Friday, more than three delays after the incident.

Governor Walz said he expected Saturday’s protests in Minneapolis to be the most intense yet. Protesters have previously told Al Jazeera they plan to stay in the streets until at least all four officers have been arrested and charged, despite nightly curfews and the presence of the National Guard.

“They would not need the [National Guard] if they would just listen to the people,” said Aman Mohamed, another Minneapolis resident.

It’s uncertain what exactly it’s going to take for things to calm down, but Layla Ahmed, another resident, told Al Jazeera “having one person arrested is not enough. We need all four.”

In a joint statement with the family of Floyd, Benjamin Crump, a prominent civil rights lawyer whose firm is representing their case, called the arrest of Chauvin “a welcome but overdue step on the road to justice”.

The fact that the three other officers, identified as Thomas Lane, Tou Thao, and J Alexander Kueng, stood by while Chauvin pinned Floyd with his knee for almost nine minutes “demonstrates a breakdown in training and policy by the city” the statement said. “We fully expect to see the other officers who did nothing to protect the life of George Floyd to be arrested and charged soon.

Over 6 MILLION of you have signed this petition (started by a 15 year old, btw) to urge @MayorFrey & DA Mike Freeman to ARREST & CHARGE ALL FOUR officers involved in the murder of George Floyd. Join the fight as we get #JusticeForGeorgeFloyd!! Petition: https://bit.ly/2yOX8BE 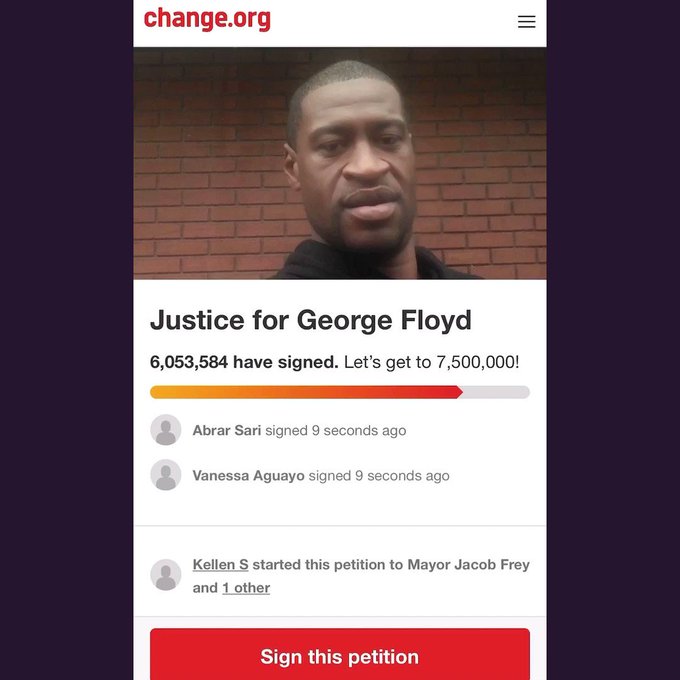 The bail for Chauvin has been set at $500,000, according to an official document provided by CNN. If convicted, he could face up to 25 years in prison.

In addition to more arrests, Crump and the family said it is essential that Minneapolis “closely examines and changes its policing policies and training procedures to correct for their lack of proper field supervision; the use of appropriate, non-lethal restraint techniques; the ability to recognise medical signs associated with the restriction of airflow, and the legal duty to seek emergency medical care and stop a civil rights violation.” 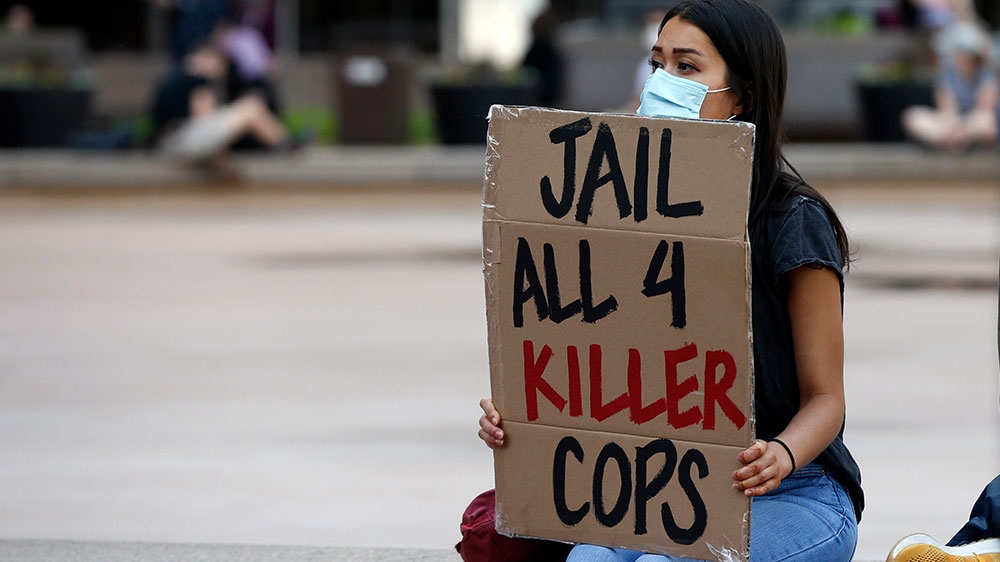 Crump also said the family had hired an independent medical examiner to conduct their own autopsy, following the release by the preliminary autopsy report by the Hennepin County Medical Examiner’s office.

The report said there were “no physical findings that support a diagnosis of traumatic asphyxia or strangulation”.

Floyd likely died from “the combined effects of … being restrained by police, his underlying health conditions and any potential intoxicants in his system,” the report added.

Responding to the report, Floyd’s family said: “We are not surprised, yet we are tragically disappointed in the preliminary autopsy findings released today by the medical examiner. We hope that this does not reflect efforts to create a false narrative for the reason George Floyd died.”

Meanwhile, in south Minneapolis on Saturday morning, community members cleaned up from the previous night’s protests as National Guardsmen continued to arrive in the city.

“It doesn’t seem like [the National Guard] contained much,” said Stefanie Rangel, 27, who helped organise the clean-up crew that has been picking up “lots and lots” of broken glass in the hopes that children can walk around safely.

It’s not hyperbolic to say that every business has been effected, but many locally owned ones were spared in comparison to the major corporate outlets. 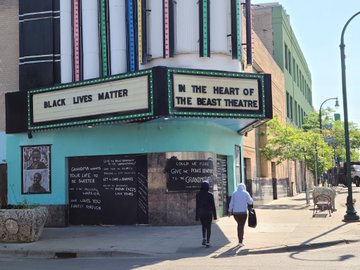 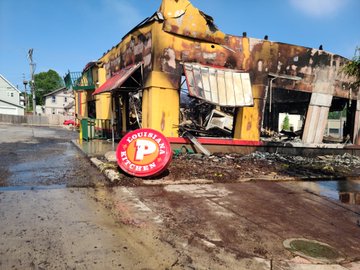 Wahab T, a resident of 25 years, who said he knows half of the small business owners in the area from living just a few blocks away, is ambivalent about the National Guard’s involvement.

“They’re here to help,” he said. The bad part, he thinks, is that kids have to see guardsmen walking around with guns. “They think this is a warzone.”

Another longtime resident, Marvin Smith, who describes himself as a peaceful bystander that was at the Plymouth protests of 1966 in North Minneapolis, said the Guard “should have been here”, but that “you can’t tell people not to protest 400 years of injustice.”

Smith said he “hopes it’s peaceful forever,” that it was unfair to compare brick and mortar buildings to “blood, sweat, and tears”. He said he believed there is still a long way to go before people of colour have the same opportunities and freedoms as white people. “The idea that this is going to go away when the rioting stops is asinine.” 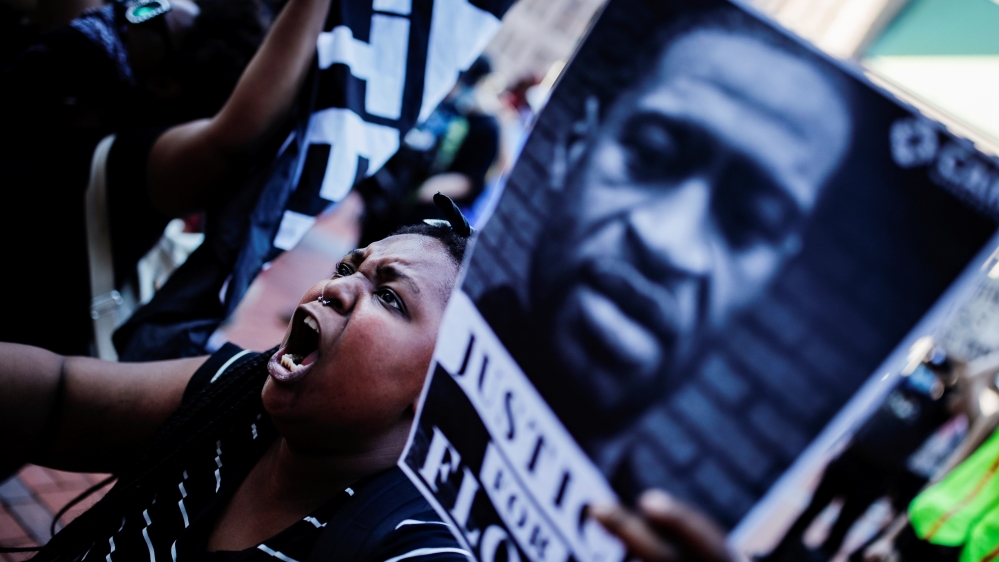 In addition to the National Guard, the Pentagon on Saturday ordered the Army to put military police units on alert in case they are requested in the city, The Associated Press news agency reported.

US President Donald Trump, who reportedly requested the rare move by the Pentagon, has – without providing evidence – blamed the violence on “radical left” protesters.

But Minnesota Governor Walz said on Saturday authorities believe some of the violence in Minneapolis is the work of a “tightly controlled” group of outsiders, including white supremacist groups and drug cartels. He did not elaborate.

Layal Ahmed, a resident, also had her suspicions.

“I believe these fires are not being started by the youth,” she said,

“I believe it’s being started by people coming from the suburbs, or even white supremacists,” she added. “People that live here love this city, but we don’t stand for injustice.”