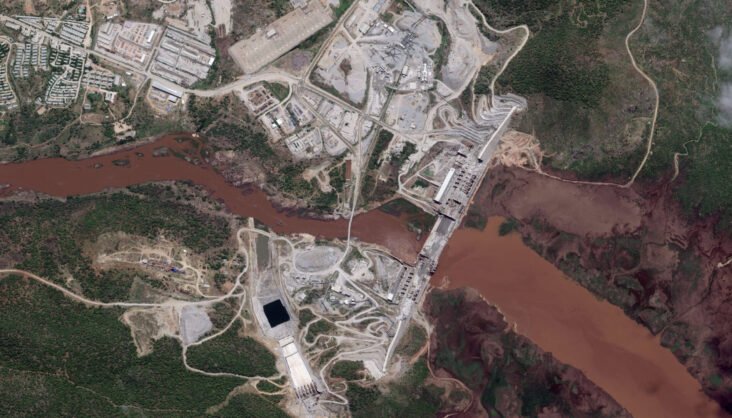 The construction of the Grand Ethiopian Renaissance Dam on the Blue Nile tributary has been poisoning the atmosphere between Cairo, Addis Ababa and Khartoum for more than 10 years. The situation has escalated to the point where a military conflict can no longer be easily dismissed.

Finding a solution to Ethiopia’s Nile basin dispute with Egypt and Sudan, its two large downstream neighbours, does not sound like too daunting a task, in theory.

It is true that Egypt’s survival has hinged on the flow of the Nile’s waters since time immemorial; it is also true that Sudan is in an uncomfortable position, caught between a rock and a hard place in terms of its northern and southern neighbours.

With tensions mounting as the planned start date of the dam’s second filling approaches, The Africa Report takes a closer look at an issue that has been a destabilising force in the region over the past 10 years.

The monumental Grand Ethiopian Renaissance Dam (GERD) project is not intended to deprive neighbouring countries of their water supply.

Initially conceived to meet the power needs of Ethiopians and their neighbours, the dam will have the added bonus of regulating the Blue Nile waters and preventing flooding, particularly in Sudan. And it does not seem unreasonable for Ethiopia, which has long been excluded from international talks on Nile water-sharing, to take its share, as do eight other countries dependent on the river for their water.

But it is also true that the filling phase of the colossal dam will, for a time at least, reduce the flow downstream. Neither Egypt nor Sudan are willing to accept this, certainly not without negotiations or assurances.

These rational arguments clash with the personalities of Abdel Fattah al-Sisi and Abiy Ahmed, the leaders of the two main countries in question.

READ MORE Egypt, Ethiopia, Sudan: Is the escalating language in GERD talks cause for concern?

As authoritarian rulers who must demonstrate their strength in order to stay in power, both have retreated into an uncompromising posture for reasons also related to the political and security situation in their respective countries.

This focus on matters at home is worrying and lends a certain credibility to the bellicose threats regularly brandished by both sides. None of the parties involved have anything to gain from a “water war” over the dam project. There is still time for reason to prevail.