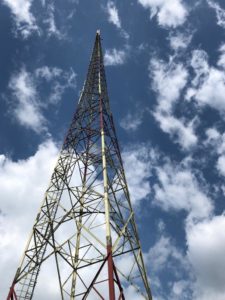 November 21, 2018//-Television has over time, become one of the greatest gifts of electronic engineering given to mankind.

Although the birth of TV broadcasting in some parts of the world is widely known – 1936 in Europe, 1939 in North America the evolution of TV in Africa is less well understood.

Some reports say that the establishment of a Moroccan television station in 1954 marked the beginning of the television age in Africa, while others maintain that the first terrestrial television broadcast signals on the continent occurred on Saturday 31 October 1959 and belonged to the Western Nigeria Television Service.

Algeria, Kenya, Uganda and Senegal launched television stations in the late 50’s and mid 60’s, however South Africa, Cameroon and several other African countries did not have TV stations until the 70’s and early 80’s.

Nigeria was a front runner in introducing news and specific genres of content too. The nation-wideNigerian Television now known as the Nigerian Television Authority (NTA)  began with a takeover of regional television stations in 1976 by the then Nigerian military authorities, and became the mouthpiece of government.

News programming was the bedrock of government’s plan to forge national unity, and scripted news wasintroduced by this monopoly in the late 70’s.

By 1980 efforts to increase the level of original content from Nigerian producers gained momentum, and the NTA network set a ceiling of 20% broadcasting time for foreign programming in order to stimulate interest in local content.

Between 1980 and 1985, NTA started producing Africa’s first local soap operas, children’s programmes and comedy series. This marked the birth of the Nollywood film industry, which now produces in excess of 50 movies per week, surpassing Hollywood as the world’s second largest movie industry by volume after India’s Bollywood.

Pay-TV was introduced to Africa in 1992, when M-Net launched an analogue service to over 20 countries. A year later, MultiChoice Africa began expansion outside South Africa’s borders, and is now present in 49 countries across Sub-Saharan Africa.

In 1995 MultiChoice introduced digital technology to the continent with the launch of the DStv bouquet and in 1996, analogue satellite services to Africa were cancelled. DStv was one of the first broadcasters outside of the United States to launch a satellite platform which enabled high-quality transmission to Africa’s most remote regions.

Streaming and video-on-demand (VOD) services have started supplementing broadcast TVfor some time mostly in the area of news.  Today most news consumers are no longer reading lengthy articles but watching video of events as they unfold from news agency sites or social media networks.

The era of consumer led journalism and social networking has considerably shifted the power of traditional news agencies and at the forefront is video however this has also lead to other problems such as the era of fake news and hence the need for news consumers to check authenticity with well-known news agencies. We have come so forward that you can click here to visit Exporexi and have your own channel.

However, with relatively slow and expensive internet connections being the norm in Africa,commercial VOD and streaming services have seen slower growth than in markets where data speeds allow for more efficient live streaming.Pay-TV is still growing on the continent, and now more as you can watch it from everywhere you are, and with a usb c to dvi cable you can connect your smartphone or laptop easily to your 4K TV.

Increasing broadband penetration and the reduction in data rates in Africa will increase the penetration of online video content. We expect online video consumption to be a supplementary service to traditional pay television as online providers do not provide news channels and live sport which are so key to household viewing.

The traditional video shops now stand empty on each street corner and consumers no longer need to leave their homes to get a video – alternatives to this are DStv Box Office services on the Explora decoder it provides an option where consumers don’t have to pay for the delivery of the movie while streaming requires the delivery cost and the bandwidth.

Local content will remain a crucial cultural and economic factorin African markets and must be invested in and nurtured if it is to grow in the rapidly changing video entertainment space.

Home-grown content employs more than a million people directly or indirectly in Nigeria and is the country’s second-biggest source of jobs after agriculture.

According to a PWC report, Nigeria’s entertainment and media revenue could more than double to an estimated $8.5 billion this year from $4 billion in 2013, and is considered one of the major pillars on which to grow and diversify the Nigerian economy.

Massive and continued changes in the entertainment industry are afoot, and the recent AT&T acquisition of Time Warner in the US is a perfect example of how the lines between content producers and the owners of distribution platforms are being blurred. The full impact of this disruption on the global landscape remains to be seen.

Here on the huge and diverse continent, we will need to marry global best practice with our unique needs, challenges and opportunities to navigate our own path through this shifting media environment and ensure that we protect local industries, culture and economic growth. It’s going to be a bumpy and fascinating ride, just like it has been since TV began transforming Africa in the fifties.