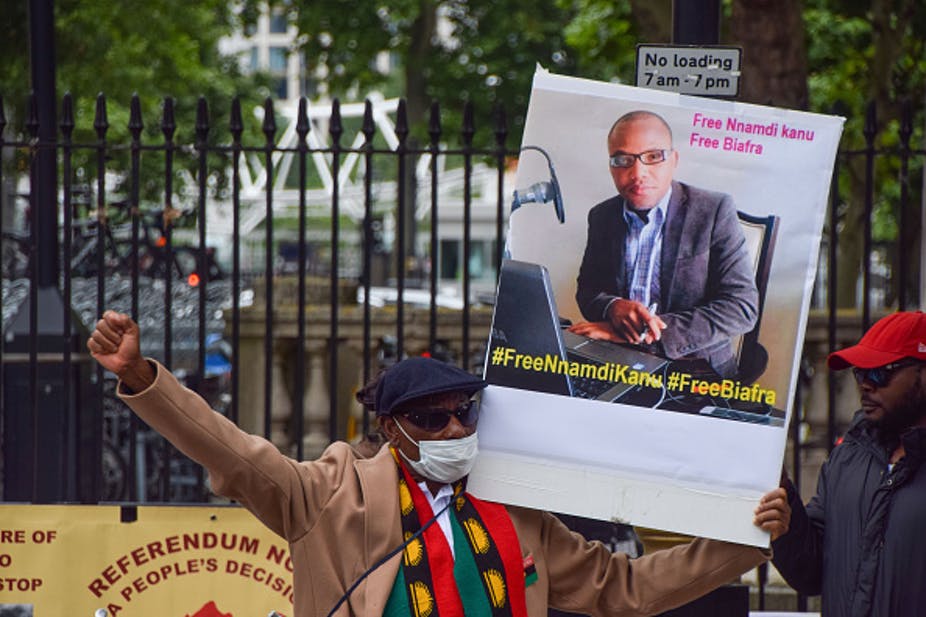 In late June, Nnamdi Kanu, leader of the Indigenous People of Biafra, was rearrested. He was first arrested back in October 2015 for treasonable felony as well as disturbing the peace and violations of human rights. He jumped bail and fled Nigeria in 2017.

Kanu’s rearrest was greeted with euphoria in government circles. This is because he has established himself as an “enemy of the state” by endorsing the use of violence in his campaign to see Biafra established as a separate Igbo state.

The Indigenous People of Biafra became a prominent force of Igbo nationalism under the leadership of Nnamdi Kanu in 2012. Prior to this, its leaders had been involved in pro-Biafran agitations through Radio Biafra, a station in London.

The International Crisis Group, an independent, non-profit, non-governmental organisation committed to preventing and resolving deadly conflict, argues that the Indigenous People of Biafra leaders are not “clear about how they see the territory of the new Biafra”. This is mostly because Kanu and the group envisage that the oil-rich Niger Delta region will join Biafra. But many people in the region oppose the idea.

In September 2017, the Nigerian government proscribed the group as a terrorist organisation, a decision that’s been heavily criticised by some. For example several special rapporteurs within the United Nations argue that the proscription impinges on the right to association and political expression of the Indigenous People of Biafra.

The argument is strengthened by the Nigerian government’s reluctance to proscribe kidnappers and armed bandits who are abducting school children and frequently attacking defenceless civilians.

Other proscribed groups in Nigeria include Boko Haram and its splinter group, the Vanguard for the protection of Muslims in Black Africa – often described as al-Qaeda’s franchise in Nigeria.

The Indigenous People of Biafra thrives on the grievances of the Nigeria-Biafra war (1967-1970). It regards the period of the war as the Biafran Genocide – 1 million people were reportedly massacred by the Nigerian military government.

The group also mobilises around ethnicity and the country’s parlous economy.

It is not the first organisation to agitate around Igbo secession. Afflicted individuals and groups have often mobilised to relieve the trauma of the war past.

In 1999, after Nigeria’s return to democratic rule, the Movement for the Sovereign State of Biafra was established by a lawyer, Ralph Uwazuruike. In 2001 it was banned and in 2005 its leader was jailed for treasonable charges.

Other forerunners of Indigenous People of Biafra include the Biafran Zionist Movement and the Voice of Biafra International. This was a radio station managed and financed by Igbo diasporas.

But all lacked the technological savvy, appeal, young membership and militant rhetoric that has given the Indigenous People of Biafra its wide visibility.

The movement has appealed to young people who are active on social media. They have found a voice for disseminating information about their cause to supporters at home and abroad. The group uses these platforms and other public outlets to attack the Nigerian state and the government.

The Indigenous People of Biafra has also allegedly carried out acts of violence in southeast Nigeria. It was this that led the Nigerian government to take action in 2017.

The Nigerian government has to take some of the blame for the radicalisation of non-state actors like the Indigenous People of Biafra. The state sought to extinguish the agitations of disillusioned young people through unfiltered brutality.

And given its obsession with the group, the Nigerian state unwittingly elevated Kanu into a cult hero. It did this in much the same way that Boko Haram was elevated in 2009 following the extra-judicial killing of its initial leader, Muhammad Yusuf, while in police custody.

The Indigenous People of Biafra’s public activism may be smashed through military means. But its ideology seems likely to remain active, feeding into places like Tiv, Yoruba, Niger Delta, and Middle Belt constituencies. In the past all have seen vociferous secessionist campaigns.

For example, five years ago, a relatively new group, the Adaka Boro Avengers, threatened to declare the Independent Republic of Niger Delta. The Oodua People’s Congress represents ongoing Yoruba nationalism in the southwest.

The proliferation of platforms for self-determination is connected to disenchantment with the postcolonial state in Nigeria. People are resisting the exclusionary structures of the current arrangement. They want a more meaningful alternative.

In my view, it is incumbent on the Nigerian state to present the olive branch. The alternative is to let the people decide their fate through a referendum with all the attendant implications.

In his book, The Politics of Biafra and the Future of Nigeria, former member of the Federal House of Representatives in Nigeria Chudi Offodile argues that it would be an uphill task to hold an “unwilling people hostage in any country”.

For their part, the Indigenous People of Biafra, and other secessionist groups in Nigeria, must come to a non-military solution to avoid what Buhari refers to as the carnage of the past.

Questions of justice for the victims of the war, and how the people in the southeast perceive their position or identity within the context of the Nigerian state, must be discussed openly through dialogue among the Igbos and between them and the state.

Not many Nigerians are convinced these negotiations will happen with an administration that has a blemished human rights records. Buhari, who served as military head of state from 1983 to 1985, as well as two other military heads of state, Ibrahim Babangida and Abdulsalam Abubakar, turned down an invitation of the Human Rights Violation Investigation Commission to appear before it. The commission, also known as the Oputa Panel, was set up in 1999 by the then president Olusegun Obasanjo.

Its remit was to deal with human rights abuses that occurred during the military dictatorship era prior to elections in 1999. These abuses were committed under two infamous decrees. One was Decree 2 of 1984, which allowed the government to detain citizens who threatened its national security. The other was Decree 13 of 1984. This prohibited citizens from questioning the authority of any decree in the court of law.

The commission went on to recommend that the three ex-military leaders, including Buhari, should not hold any political position in Nigeria.

If this recommendation had been followed there might have been a different engagement with the Biafran sore and other open wounds from Nigeria’s chequered history.