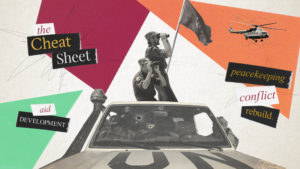 November 13, 2020//-Ethiopia’s Tigray conflict is little more than a week old, but the number of people killed and displaced is rising fast.

On 12 November, Amnesty International said “scores and likely hundreds” of day labourers were stabbed or hacked to death in Mai-Kadra, a town in Tigray. TNH could not independently verify the killings, but witnesses who spoke to the rights group blamed militia aligned to the Tigray People’s Liberation Front, an ethnic Tigrayan party fighting against the government.

One witness who inspected ID cards of victims said the dead were mostly ethnic Amharas, from a region that is supporting Addis Ababa’s offensive. Hundreds of combatants from both sides are also thought to have died in air raids and clashes in the region, while banking, transport, trade, and telecommunications services remain cut off.

Some 11,000 people – half of them children – have fled to neighbouring Sudan, where local authorities told TNH they are struggling to cope. “The capability of Sudan is very limited and the number of refugees is very big,” said one Sudanese official. Read our latest on the conflict for more.

Crisis upon crisis in Peru

They faced the world’s second deadliest COVID-19 outbreak per capita and one of the tightest lockdowns, leaving 40 percent of the population jobless and many scrambling to return to their home communities from coastal cities.

On 9 November, Peruvians added politics to their list of woes. After impeaching President Martín Vizcarra – whose approval ratings were amongst the highest in the region – Congress, opposed to Vizcarra’s anti-corruption reforms, quickly swore in the head of the chamber, Manuel Merino, as the new president.

The controversial removal of Vizcarra on “moral incapacity” and graft charges – which he denies – and the quick power switch set off street protests throughout the country.

The UN’s human rights office says it has received “worrying reports” of arbitrary detentions and the excess use of force by state forces during the protests, and called on the police to respect international norms. Few countries have recognised the transition.

Drug-maker Pfizer this week announced its candidate for a COVID-19 vaccine may be 90 percent effective – a welcome boost during a chaotic year.

The early results may be promising, but they also raise other questions: Will vaccines reach vulnerable communities? Is there infrastructure in place – think cold freezers, transport networks – to handle shipments? And what about conflict zones – especially areas controlled by armed groups?

An analysis by the International Committee of the Red Cross tries to tackle the issue of vaccine access in conflict. It emphasises that states (and armed groups) are obliged to ensure vaccines are distributed without discrimination under international humanitarian law. In practice, of course, that doesn’t always happen.

Civilians in conflict zones, or areas controlled by armed groups, have struggled to access treatment or healthcare throughout the pandemic. In Taliban-controlled parts of Afghanistan, for example, aid access comes down to ground-level negotiations (and access denials frequently derail polio vaccinations).

In Myanmar, some armed groups have had to source their own protective gear and COVID-19 tests. The World Health Organization (WHO) and others are trying to ensure equal access to whatever vaccine emerges. But in crisis hotspots, global agreements may still find roadblocks at the last mile.

“We have seen greedy scrambles for access to therapies before, from HIV to H5NI influenza, bumping the most vulnerable countries – those in the grips of armed conflict – to the back of the queue,” the ICRC notes.

Russia pledged $1 billion in reconstruction and humanitarian funds at a widely boycotted online conference about the return of Syrian refugees.

In a speech, Syrian President al-Assad said the refugees fled not because of the actions of his government, but due to “the largest barbaric Western aggression which the world has ever known in modern history”.

Only about 27 countries took part, emphasising international divisions: Turkey was not invited and Jordan did not take part. Together, they host three quarters of the 5.6 million Syrian refugees in the region. The UN says the situation is not good enough for it to recommend returns, but about 115,000 refugees chose to go home to Syria in 2019 and 2020 anyway.

The UN’s refugee agency, the United States, and the EU all skipped the conference, but the UN sent an observer. Few Syria conferences get all the players: In June, the EU hosted a fourth event about aid to Syria without the Syrian government.

New estimates from World Bank economists say at least 125 million people worldwide will fall this year below the extreme poverty line ($1.90 per day), and as many as 257 million will fall into poverty, with the line set higher, at $3.20. Calling them the “COVID-19-induced new poor”, a recent blog warns that in a “truly uncertain” environment one critical factor can push even more into poverty.

If the pandemic widens inequality within countries, for example between those who can work remotely and those who can’t, tens of millions more would become the “new poor”. Despite these threats posed to low-income and emerging economies, there is no big new aid funding on the horizon.

A high-level 9-10 November meeting of donor countries declared “financing for sustainable development risks collapsing”, but came up with no specific promises of new cash. Oxfam said they had missed a wake-up call.

In January, 90,000 people were displaced by conflict in Mozambique’s northernmost Cabo Delgado region. As the year draws to a close, that number has passed more than 400,000.

Attacks by Islamist miliants are behind the surge: This week, local media reported the beheading of 50 men and boys by jihadists on a soccer pitch in the town of Muatide. UN Secretary-General António Guterres called the killings “wanton brutality”.

From a small group of disaffected youth, the militants now number several thousand, have seized various towns – including the key port of Mocímboa da Praia – and are launching attacks on Tanzania, which borders gas-rich Cabo Delgado.

With Mozambique’s army struggling to contain the violence, local communities are forming self-defence militias. But the groups are reportedly committing their own abuses, the jihadists are only growing stronger, and the number of displaced people keeps on rising. Read our reporting for more.

THE CANARY ISLANDS: Asylum seekers and migrants arriving in the Canary Islands are being held on a pier in overcrowded, unsanitary conditions by Spanish authorities, according to Human Rights Watch.

A record 2,200 people arrived in the islands by boat between 7 and 9 November. Located off the coast of West Africa, the Spanish archipelago recorded around 2,500 arrivals all of last year compared to more than 14,500 already this year.

CENTRAL AFRICAN REPUBLIC: Ex-president François Bozizé submitted papers on 9 November to stand in presidential elections slated for December. Bozizé was deposed in a coup in 2013 and spent years in exile before returning to CAR last year. He is currently under UN sanctions for his role in the 2013-2014 crisis.

THE CENTRAL MEDITERRANEAN: More than 110 asylum seekers and migrants died in shipwrecks off the coast of Libya between 10 and 12 November, including one that claimed the lives of at least 70 people.

At least 522 people are known to have died in the Central Mediterranean in 2020, while European countries have obstructed the work of search and rescue NGOs and ignored or responded slowly to reports of boats in distress.

CÔTE D’IVOIRE: More than 8,000 Ivoiriens have fled to neighbouring countries, according to the UN’s refugee agency, UNHCR, as fresh clashes broke out this week following disputed elections that saw Alassane Ouattara win a controversial third term in a landslide. UNHCR said the refugees requested to remain close to the Côte D’Ivoire border so they can return home should the situation stabilise.

ITALY-TUNISIA: Italy is considering deploying ships and planes to monitor Tunisian territorial waters in an effort to reduce the number of migrant boats leaving the north African country. More than 12,300 Tunisians have arrived by boat in Italy so far this year, compared to just over 2,600 in all of 2019.

MEASLES: Cases of vaccine-preventable measles soared in 2019 to the highest global level in 23 years, research by the WHO and the US Centers for Disease Control and Prevention found. Experts fear disruptions to vaccinations during the COVID-19 pandemic could make matters worse.

Vamco continues westward and is projected to threaten central Vietnam around 14 November. Vamco is the latest in a barrage of storms that have churned across Southeast Asia, worsening seasonal floods. The UN says at least 2.7 million people need urgent aid in the Philippines, Vietnam, Cambodia, and Laos.

‘The Ixil helping the Ixil’: Indigenous people in Guatemala lead their own Hurricane Eta response

Indigenous leadership and experience during disasters is often overlooked or misunderstood. And yet, as the coronavirus pandemic has overwhelmed healthcare systems and crippled economies worldwide, Indigenous communities have often had to fend for themselves, turning to traditional medicine in some cases, and peaceful protests in others. Indigenous communities in rural areas of Guatemala have now been dealt yet another challenge: Hurricane Eta.

For Indigenous communities in Guatemala, the slow official response to Eta is seen as just another example of long-standing neglect by the central government. Find out how they’re organising their own responses, and about the combined threat ahead of COVID-19, drought, and hunger.

The United States may face an electoral mess on home soil, but you wouldn’t be able to tell from reading State Department press releases. The US continues to weigh in on other countries’ votes, offering stern scoldings, or avuncular kudos, with no apparent appreciation for irony.

The latest missive this week professes concern for the mass disenfranchisement of the Rohingya population and voting cancellations in Myanmar’s elections – which granted de facto leader Aung San Suu Kyi another term yet likely added to grievances among ethnic minority communities.

Others question “Tanzania’s commitment to democratic values”, or pledge to keep a watchful eye on “upcoming elections in Africa” (yes, all of it). A tweet from the US embassy in Abidjan urges “commitment to the democratic process” in Côte d’Ivoire. It’s not all dour warnings, however. An October statement greeted elections in the Seychelles with a hearty congratulations, and hopes for “a peaceful transfer of power”.